Smith knows a nice guy when he sees him.

Ozzie's nice-o-meter, however, might be even surpassed by his humility.

So when Smith lost in the championship match of our KRCG Missouri Sports Personality Bracket to Tom Henke, you can imagine Ozzie's reaction --- he lost to a truly nice guy, and the Wizard would accept it with humility.

And yes, he said it with three supers.

"I think that's one of the things that makes this (St. Louis Cardinals) organization special, I can't think of anybody who came here to play that I simply did not like," Smith continued.

It wasn't about to start with Henke.

"He was a dominating player, a big country boy," Smith said during our one-on-one conversation. "When he came over here (to the Cardinals for one season, 1995), he was at the end of his career, but he still had great stuff. He kept himself in great shape and he's probably in pretty good shape today.

"I feel very fortunate that I got to play with a lot of the great relievers of the game, like Lee Smith, Dan Quisenberry, Rollie Fingers, Dennis Eckersley, Todd Worrell and of course, Tom Henke. When you have a chance to play behind guys like that, I'll tell you what, they make your job so much easier because they're so good at what they do.

"Tom was certainly one of those guys."

'The Hall of Fame shortstop was no match for the Taos Terminator, who used his homefield advantage to help him roll through some formidable foes on his way to the championship --- Len Dawson, Norm Stewart, Stan Musial, Whitey Herzog, Yadier Molina, and Smith.

Ozzie's road wasn't easy, either --- wins over Dan Dierdorf, Payne Stewart, Andy Reid, Jack Buck and Bob Gibson to get to the finals, before losing to Henke.

"I beat all of them?" Smith said. "Oh man, when you talk about the greats of Missouri, and not being from here, it certainly is an honor. To even be mentioned in the same vein as them, it's a really good feeling."

Ozzie was born in Mobile, Ala., he spent most of his youth in Los Angeles, and now still lives St Louis after retiring in 1996 --- one year after Henke.

"I feel like I'm part of this community," Ozzie said, "and people show that love to me all the time."

Like Ike most other people in the United States, Ozzie is trying to find ways to keep him busy.

"One of the great things about being a golfer," he said, "is that it's one of the only things you can still do, so I try to do that at least three times a week. I'm working on my bootlegging skills, I made some Lemoncello (a liqueur) the other day and it turned out pretty good, and my cooking skills are getting better.

"But it's been tough, none of us have had to deal with something like this pandemic. The isolation, the rules to stay in, it's really tough because our society was so free and so open. I think we're still trying to come to grips with that."

Smith isn't overly confident about the prospects for the baseball season, with or without fans. Could he imagine a Cardinals-Cubs game --- whether it's at Busch Stadium or Wrigley Field --- being staged in front of 40,000 empty seats?

The players create the excitement, but it's the fans who create the EXCITEMENT.

"That would be weird and odd," Smith said. "We all want baseball, we wanted it last week. But unfortunately, the virus is going to dictate that.

"I don't think we'll see any baseball until we have a better grip on who has it (Covid-19), who's had it, and who may get it. If we don't get better testing quickly, this (season) may be a wash.

"The message I want to leave with people is that this is not a joke. If we're going to get out of this thing, we're going to have to do it as a team with everybody doing what is being asked of them.

"The less we mingle with people now, the quicker we can come out of this situation later."

St. Louis Cardinals Hall of Fame shortstop Ozzie Smith waves to the crowd in Atlanta prior to the final at-bat of his 19-year career in 1996. 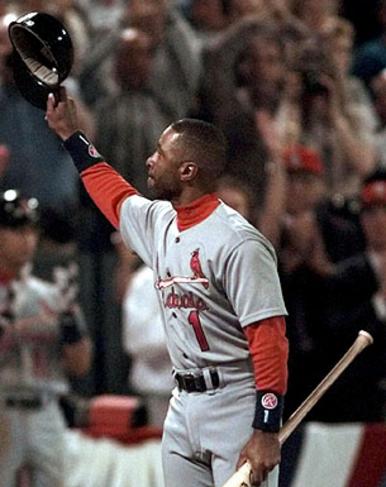 It's down this: Henke

vs. Ozzie for title