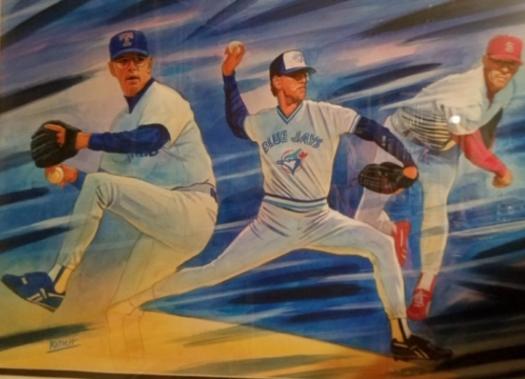 If nothing else, this contest is creating some strange bedfellows.
In these days filled with basically nothing but bad and too often tragic news, KRCG's Missouri Sports Personality Bracket is offering a slight diversion, hopefully, to go along with a few smiles.

With no NCAA Tournament bracket to fill out this year, call this a crude replacement ... like going from Miss America to Miss Swine at the County Fair.

Which brings us back to Virginia and Tom.

In the first round of our competition --- although it's a competition with no prizes --- Henke, a No. 16 seed, stunned a No. 1 seed, Hall of Fame Kansas City Chiefs quarterback Len Dawson, to advance to the second round.

"It's an honor to be in the same class with Len Dawson and these other guys," Henke said. "You've got Hall of Famers left and right.

"So to beat Len Dawson in this deal is quite an honor."

The Cavaliers, you might recall, were the first No. 1 seed to lose a No. 16 in the first round in NCAA Tournament history just two years ago. The giant slayer was a school we'd never heard of before and haven't heard from since --- the University of Maryland-Baltimore County (UMBC).

I still don't know their nickname. And without Googling it, you don't either.

But we've heard of Henke, and his nickname is the Taos Terminator. Now in the second round, he'll face another Missouri sports giant --- Norm Stewart.

Can David take down Goliath yet again? David smiled at the thought.

"I think it's going to be interesting," said Henke, 62, who racked up 311 saves in his 14-year career with Toronto, Texas and St. Louis, winning a World Series with the Blue Jays in 1992. "Norm and I are good friends and I probably could have played for him ... I'm pretty tall (6-foot-5) and was quite the athlete here in Mid-Missouri back in the day.

"Hopefully, I can keep the momentum going and put Stormin' Norman back on the bench and move on to bigger and better things."

"Winners" are decided by who gets the most votes from the viewers, and more than 5,200 of you voted in the first round. Voting is open now until 5:30 p.m. Friday for the second round, which features a lot of compelling matchups. To name a few others:

Great stuff, indeed. To see all the first-round results and to vote on the second-round pairings, please go to https://krcgtv.com/station/contests/krcg-13-missouri-sports-personality-bracket?fbclid=IwAR2mdQJXZBjXG4PbbEdvS47kHT2I2u4otCVz3YCen5eE5fBXV-qaINboMVI

Have fun with this, and keep watching Rod Smith and reading Loeffler's Link for further updates as our "tournament" proceeds.

Also, UMBC is the Retrievers. Thank you, Google.

Lastly, we're all going through these brutally tough times together, Henke included, and we can't wait for them to end. Stay safe, stay smart, stay healthy.

"We're just kinda stuck at home and not doing a whole lot, like everybody else," Henke said. "And doing a lot of praying."

No. 16 seed Henke shocks
No. 1 Dawson in KRCG bracket