By any standard, Tom Henke is a great guy, always quick with a smile and handshake --- or elbow bump --- always ready to help his neighbor.

Help an old lady across the street?

Question for Tom: In a battle of Missouri all-time sports greats between Tom Henke and Stan Musial, who would you vote for?

Answer from Tom: "There's no question," Henke said with a laugh, "I'd vote for Stan Musial. There's nobody that can compare to him, really.

"To me, he's the finest athlete to ever put on a uniform in the state of Missouri in any sport."

Henke is that honest.

But in this forum, honesty isn't always the best or winning policy, it's what KRCG viewers and voters think. And in a tight battle, he edged Musial by just 12 votes in the Sweet 16 to advance to the Elite Eight of the KRCG Missouri Sports Personality Tournament.

Henke had the pleasure of getting to know Musial through the years, and he was even more impressed by Stan the Man off the field than on it. And we're talking about a .331 career hitter --- even though Musial's career was interrupted by his military service in World War II --- who  finished with 475 home runs, 725 doubles, 177 triples and 1,951 RBI.

"What a quality individual," Henke said. "I got to know Stan through his (charity golf) tournament and doing a few other things with him, and he was the most approachable person of that stature that I've ever met  --- by far."

Whether he liked the Man or not, the Taos Terminator did what he does --- terminate the opposition. Still ...

"When I found out I was going against him," Henke said, "I thought, 'Well, it was a nice run.' This is a fun deal but going against Musial, I thought it was the end of the road.

"Let's put it this way, I'm very surprised, but I'm also quite humbled and honored."

Let's just say Henke, who had 311 career saves and won a World Series with Toronto in 1992, is benefiting from his homefield advantage.

"I don't know what the criteria is or how they vote, but luckily, I have a big family," he said. "it pays to have a big family --- I used to say that I couldn't throw a rock at the playground at school without hitting one of my relatives."

Besides being Henke country, this is also definitely Cardinal country --- all eight of the remaining "competitors" all have ties to the Cardinals.

Henke's connection was brief, as he finished his 14-year major league career by playing his final season with the Cardinals.

The others, however, are deeply entrenched into the lore of franchise history including Henke's opponent in the quarterfinals, manager Whitey Herzog, who led the Cardinals to three World Series in the 1980s and the 1982 world championship.

Herzog is another friend --- he plays in Henke's charity golf tournament every year, and Henke has always returned the favor.

"Whitey is another good man," Henke said, "as good a man as I've ever met."

The other pairings are all very familiar names to Cardinals fans:

Can Henke, a No. 16 seed, continue his amazing run? He's already taken down three No. 1 seeds --- Len Dawson, Norm Stewart and the Man, himself.

into Elite Eight of KRCG tourney 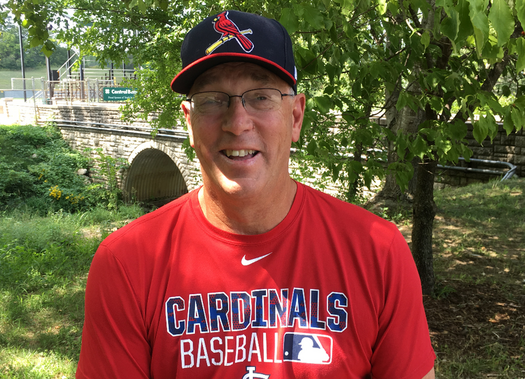