JEFFERSON CITY, Mo. --- This has been one, miserable nightmare for Dan Baumgartner.

And you could easily add a lot more colorful adjectives to that.

It's been both a physical and mental beatdown for all involved.

Since Turkey Creek opened in 1999, it had some minor flooding in 2000 and more significant flooding in 2012. It wasn't open, however, for the historic flood of 1993, when the river crested at an all-time high of 38.3 feet in Jefferson City.

"The last time we had a flood like this," Baumgartner said, "was 1951. It lasted through May, June and July."

This one's not far off.

"This one's lasted a long time," he said. "I still have two holes under water ... the water has no place to go. Once it backs up on me, it's stuck in here."

The hopes are the river will drop enough in the coming days that the remaining water will finally recede. But the damage is done.

The good news is Turkey Creek's new banquet center was spared and the practice tees were mostly spared, while the clubhouse received only minor damage.

The practice greens, however, located at the entrance have been destroyed. The greens on the original 9 of the par course, while they survived, are a bit rough because "they didn't get the proper TLC they needed," Baumgartner said.

"During the flood, we did some work by boat, going from green to green. That wasn't easy."

As for the tees and fairways on the course, "They're gone," he said. And while the handicapped course is open, water lifted and ripped up portions of the field turf.

Losing all of June was crushing for the business --- "It's our biggest month for everything." --- including the loss of 12 big events at the Capital Bluffs event center.

This flood, however, has effected a lot more than Baumgartner's bottom line.

Turkey Creek hosts numerous events for kids, for veterans, events involving Special Olympics and the Special Learning Center, including a dock where they can go fishing; and so many fundraising efforts for great causes --- efforts that have raised over $600,000.

"It's a great partnership, we want to help as many people as we can," Baumgartner said. "But sometimes --- and I don't like to say it, but it happens --- we need help. Because right now, we're tapped out.

"I'm not asking for a handout, but if they're willing to help another state, another county, another city, why not help the people of Callaway County? If we don't see this levee updated, we're going to see this more frequently, with all the infrastructure and stuff that's been done upstream."

Of course, we're not just talking about Turkey Creek being devastated by the effects of this flood. Along with the farmers and their crops, there are numerous other businesses including the Jefferson City Airport and the businesses it houses, Capital Sand, Capital Energy Propane, Lauf Equipment, and MFA that had a bin split open --- "They lost all their soybeans, they got wet and swelled," Baumgarter said.

That's just to name a few.

That's Part II of this process --- Part I is dealing with the clean-up and rebuilding that's been caused by this disaster. But Part II is equally important --- trying to make sure it doesn't happen again.

If 38.3 feet happens again, well, nature wins. But that's the only crest that's ever reached above 35 feet in Jefferson City.

"We (all the businesses in North Jefferson City) are working with the local levee district, the city and the local politicians in hopes of getting the levees raised to 35 feet," Baumgartner said.

While FEMA has shown little interest, Baumgartner said, Gov. Parsons and Lt. Gov. Kehoe have been in contact with FEMA in an attempt to get them involved.

"The political figures are all backing us, they want this, the Corps of Engineers want this. It's just a matter of getting it done. I think something will get done, but I also understand this won't happen overnight."

Finally, there's this --- the ultimate insult to injury. With his property inundated by flood waters for weeks, a water main busted under those waters. What do you do?

A miserable nightmare ... plus other adjectives. 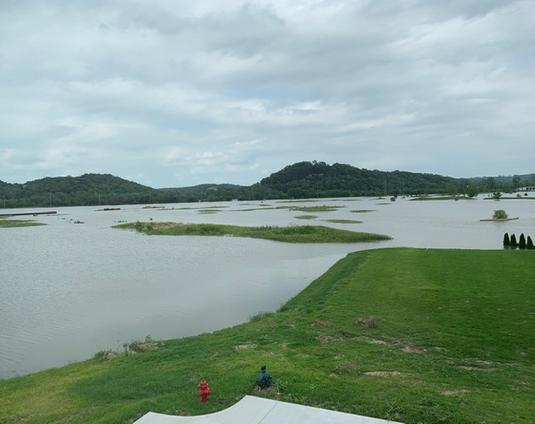 Turkey Creek Golf Center turned into a lake for many weeks, but it's slowly returning back to full operation.

After weeks of flooding,

back open for business