Helias senior Lauren Howell has signed a letter-of-intent to play softball at the University of Arkansas. 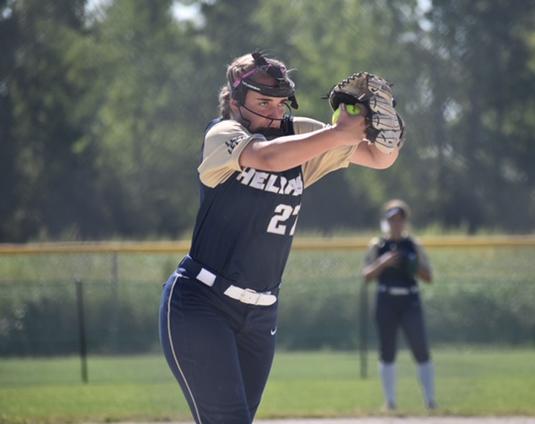 After getting through
softball districts, Helias
taking aim on Bolivar

Just think what she could have done if she'd been healthy,

Despite missing most of the season with an inury, Howell was still dynamic during the Lady Cruasders' run to the Class 3 state championship this season, a season that put a superb stamp on her high-school career.

Howell's career certainly didn't go unnoticed, as she was rewarded for her efforts by signing a national letter-of-intent to play softball with the Arkansas Razorbacks on Friday at Helias.

Check, check. But why not Mizzou?

"They gave me a good offer, but I wanted to be in the college experience," Howell said. "And I really saw an opportunity to make a big impact at Arkansas."

"When we first got her as a freshman," Wyrick said, "you knew she was going to be good. You could just see it right away and as she got older, she just got tougher each year."

The better Howell got, the more she was coveted. Not by high school teams, she was locked into Helias, but by these talented traveling teams that go around the country.

This directly resulted in her injury --- a fractured fibula in her left leg, the result of overwork. To put it another way, a lack of Load Management, as Howell play more than 100 games this summer.

"When I found out I was going to be out for most of the season," Howell said, "I was pretty bummed. So I just became more of a team player, I was even more supportive."

In stepped Alexa Rehmeier, who filled in admirably until Howell returned.

"I was very confident in her and I knew she was going to get her job done, " Howell said. "And if she needed it, I was going to go in there and get my job done."

As in the state championship game, a 3-1 win for Helias (26-6) and a win for Howell over Sullivan.

Besides a blistering fastball and the ability to spot her other pitches in the zone, as well, Howell's best attribute is something you can't coach.