The Helias Lady Crusaders mug for the cameras after winning the district softball championship Saturday in Ashland.

After getting through districts,
Helias taking aim on Bolivar

Okay, that doesn't rhyme and it's not funny, but it's true.

The Lady Crusaders kept knocking on the district softball championship door, but were denied three straight years. They didn't exactly bust down the door Saturday --- it was the narrowest of wins, 1-0 over Blair Oaks --- but they finally made it there.

"I'm really happy for the seniors,' Helias head coach Chris Wyrick said, "because they were in the district finals three years --- they lost to Sullivan two years, and Sullivan made the Final Four, and they lost to Mexico last year, and they won the state championship.

"They've been right there, on the edge of being Final Four-bound, but they couldn't quite crack the code. But they can wipe out those other three years, because they've got it now.

"It's something nobody can ever take away from them."

There's also this --- for the seniors, it was their last chance. Ever. And that can bring on some serious nerve issues. But ...

"It's funny you said that," Wyrick said, "because they were really loose, for some reason, I didn't notice a bit of nerves at all, they kept themselves loose and were ready to play.

"It's hard to beat a good three times in a season (Helias has beaten Blair Oaks 5-1 and 11-4 in the regular season), because they kind of have a little bit of edge on you, as far as motivation."

The Lady Falcons also had history on their side, a lot of it. While Helias had been 0-3 in district championship games the last three years, Blair Oaks had been 13-0 in the last 13.

"(Blair Oakxs coach) Sharon (Buschjost) has won 13 in a row for a reason, she prepares her teams and knows the game inside and out," Wyrick said. "It's always an advantage to have her as a coach."

But on this day, it was advantage, Helias.

"It helps when your pitchers throw a no-hitter," said Wyrick, as Helias (22-5) prepares to host Bolivar (23-6) in the Class 3 sectionals at 5 p.m. Wednesday at the Legion Complex.
And if not for a walk in the seventh inning, the dynamic duo of junior Alexis Rehmeier and senior Lauren Howell would have combined for a perfect game.

"She moves the ball around so well, in and out and up and down," Wyrick said. "She has a screw ball, curve ball and when her change-up is working, she's really tough to hit.

"That makes my job a lot easier when you know exactly what you're going to get in the circle.  She's been really steady."

Then there's senior Lauren Howell to come in and finish it. Howell was an All-State pitcher last year, but missed much of this season with a fracture in her left leg.

"When Lauren gets in there, she gets after hitters and it's tough for them to square balls up on her," Wyrick said. "With her coming back, I call them the two-headed monster."

Senior Rylie Kolb, another one of the team's nine seniors, is hitting.385 with 34 RBI, 30 runs and 14 stolen bases. In addition, sophomore Ella Meye, who bats second "has really come on," Wyrick said, "because of her consistency of making contact."

That's just the tip of this explosive offensive iceberg which has a gaudy .328 team average.

If you weren't sure, that's good.

For Bolivar, there's basically one name you need to know, Katie Brooks. The senior --- who's the team's top pitcher and player in the field when she doesn't pitch --- has signed with Florida State.

"She pretty much does it all for them," Wyrick said.

Wyrick is the benchmark at Helias for all things bats and balls for more than 30 years. He's the most important figure in the history of Helias baseball --- he's been a part of all five of the program's state championships, three as a player two as a coach.

Now --- in his first year as head coach of the softball team after serving as an assistant for 14 years under Dan Campbell --- he's putting his stamp on this program.

It would be fun to see Wyrick at the family reunion Wiffle Ball game, drilling line drives off Uncle Harry's head and wiping out Aunt Sally at second base to break up a double play.

"I take a back seat at the family Wiffle Ball game," he said with a smile, "and let my son get out there and represent the family. Plus, it'a a lot easier on my back."

Helias, seeking its fifth trip to the Final Four, has and won two state championships, the last coming 14 years ago.

Now, they've squeezed through the district door once again, but there's more to do.

Because the fun has just begun.

"That's the first thing I said to them after the game Saturday," Wyrick said, "and I kind of had to re-focus them Monday. You can't be satisfied because if you win two more games, you won't ever forget what it's like to go to the Final Four.

"I told them it's your turn to win this."

Maybe, just maybe, it is. 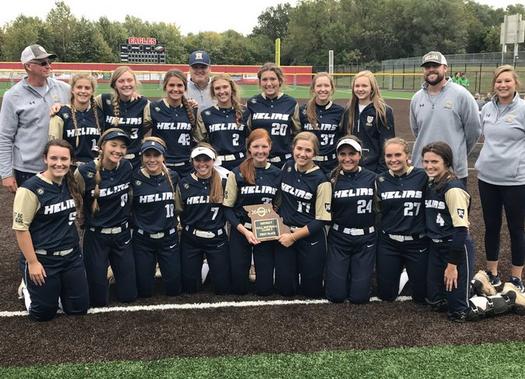 After weeks of flooding,

back open for business