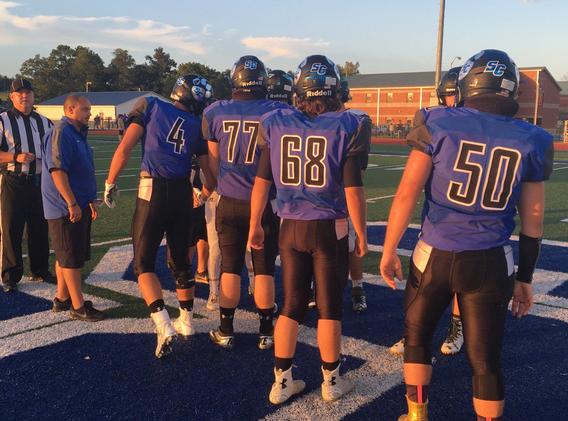 MOKANE, Mo. --- This hasn't exactly been a coin-flip game.

These have been two long-term relationships.

In Game 20 in the battle for Callaway County, Landon Horstman threw for two touchdowns and ran for a score to lead South Callaway to win its eighth straight in the Cup series, a 36-14 decision over North Callaway on Friday night.

"We've been telling our guys all week that this is an important game," Bulldogs head coach Zack Hess said, "but it's not going to make or break our season. We're excited to get this win, but at the same time, we just weren't focused on this game.

"We've got a lot more games to play, and we want to keep working and getting better."

The T-Birds (2-2) turned it over on their first two possessions, the first coming on their first play from scrimmage. That led to a 4-yard run by Dalton Stone to give the Bulldogs (4-0) a 7-0 lead just 2 1/2 minutes in.

After North Cal's second turnover, South Cal returned the favor deep in T-Bird territory. But with 4:04 left in the opening frame, Horstman hooked up with Kaden Helsel, who split two defenders and raced 56 yards for a touchdown --- on 3rd-and-13 --- to make it 13-0 midway through the first.

"To grab the momentum at the beginning of the game, that was huge," Hess said. "I think it really set the tone, it was big for our guys. And for the most part, we kept that momentum the rest of the way."

Like in the second quarter, as the lead grew to 22-0 at the break. First, the Bulldogs sacked quarterback Milo Henry in the end zone for a safety, before taking advantage of a short field on the ensuing free kick and scoring on a 10-yard pass from Horstman to Bennett Hager --- this one on 4th-and-9.

It was another big play when the Bulldogs needed it most.

"To convert those plays was huge for our offense," Hess said. "That was the best defense we've seen so far, so we knew it would be hard to get those big-chunk plays."

Early in the fourth quarter --- and after a scoreless third --- Henry was scrambling for his football life in the end zone when he found Wyatt Branson, who got behind the defense and dashed 99 yards for a touchdown.

It's a record that will never be broken. The two-point conversion made it 22-7 with 9:12 left.

"The defense had played a great game," Hess said, "but there was a breakdown in coverage on that particular play. (Branson's) a good player ... he's fast and he made a great play."

Branson's score started a four-touchdown flurry in the next six minutes, three of those coming in less than two minutes.

After the onside kick failed, the Bulldogs went 45 yards in just two plays, finished off on a 29-yard sprint by Peyton Leeper to build the margin to 29-7 with 8:43 left.

The T-Birds came back to get within two scores on Henry's 32-yard run with 7:22 left, before the Bulldogs finished the scoring on a gritty 4-yard surge by Horstman, a score set up on another fourth down conversion on a pass from Horstman to Jarrett Livengood.

"Landon did a great job tonight," Hess said. "He had great poise all night long, he stood tall in the pocket, delivered some great balls, and he also ran the ball really well."

It will likely be tied in four more years.