Jonesy was certainly one of a kind

Bob never hid behind his handicap, he never felt sorry for himself, and the last thing he wanted was for you to feel sorry for him. Instead of hiding away, he was out there, everywhere, smiling the whole time. 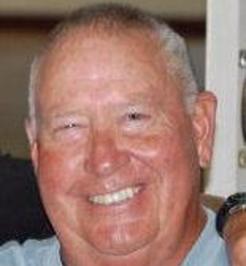 JEFFERSON CITY, Mo. --- The first thing you noticed about Bob Jones was his handicap.

That's only natural, he only had one arm. People tend to notice such things.

At first, you may have felt sorry for him. That, too, is only natural.

But not for long. Any pity you had for Bob Jones faded before the first handshake ended.

Bob never hid behind his handicap, he never felt sorry for himself, and the last thing he wanted was for you to feel sorry for him. Instead of hiding away, he was out there, everywhere, smiling the whole time.

"Anything he did, he was a class act," lifelong pal Bill Deeken said. "By far, he was one of the best friends I ever had."

Bob Jones died suddenly and unexpectedly Tuesday morning. He was 74.

"He never, ever complained about anything," Deeken continued. "He did anything he wanted to at any time, and he did it better than most people could. He worked at it and didn't let it get in his way, that's the way he went through his whole life."

Every room Jones entered got a little better, grew a little brighter. He was as good as it gets. This wasn't a man with one arm, he was Bob.

He was simply Jonesy.

Fantastic ... a perfect word to describe him.

People feel sorry for themselves for the smallest things. What about Bob? Not having an arm is a fairly big deal, but not to him.

"I never saw the guy down," Deeken said. "He didn't know he didn't have a left arm, because he was born that way. But he had more strength in that right arm than most people have in both arms."

He put that arm to good use during his days and years playing softball. He was Jim Abbott before Jim Abbott was Jim Abbott, a major league pitcher with one arm in the 1990s who had a solid career, including throwing an improbable no-hitter in 1993.

"And he wasn't a bad hitter, either. He didn't have a lot of power, but he hit a lot of line drives."

Jones --- who also played golf for decades and was a constant presence on the holiday basketball tournament committee --- worked for IBM and served as Cole County commissioner from 1998-2007, a position that allowed him to be a difference-maker on a significant stage.

"He brought so much professionalism to that commission," said Deeken, who was Cole County clerk at the time. "As soon as he got there, things just changed ... there was a style about Bob that they hadn't seen up there for years.

"The poise, he didn't get upset, Bob was so cool."

Jonesy also helped on smaller stages, he turned up everywhere, especially as an ambassador with the Lions Club or at charity golf tournaments, where he was a fixture.

"He did everything," Deeken said. "He was a lot like Carl Vogel --- we've lost two great ones this week --- they both wanted to do anything they could do to help somebody."

Ah, the stories Bill can tell. When you're friends for life like Bob and Bill, you have plenty of them.

Some 50-odd years ago, Deeken was working as a bartender at the Tiki Lounge. The Tiki was the watering hole at Bowl-A-Wile lanes on Missouri Boulevard, which later became Midstate Lanes and is now the location for Goodwill.

On that night back in the 1960s, it was near closing time, but the lounge was still full.

"Bob went over and locked both doors and I said, 'What are you doing?' And he looked at me and said: 'I'm going to tell you one thing right now, Deeken, somebody stole my arm and we're not leaving here until we find it.'

"He just cracked me up, he would come up with stuff like that all the time."

On a personal note, I had the pleasure of being Bob's teammate on the golf course several times. He was a better player than most guys with two arms.

When he did hit the occasional bad shot, Jonesy would smile, shrug and explain:

"Too much right arm."

Deeken heard that line many times, as he played with Jones on countless occasions though the years --- even though Deeken and Jones were in opposing political parties.

And yes, in this case, that matters.

"One time we were playing --- and the guy never did yell 'Fore!' from the other fairway --- and the ball bounced off Bob's shoulder and hit me in the leg," Deeken said. "And Bob looked at me and said: 'That son of a (gun) sure isn't prejudiced, is he? He doesn't care if you're Democrat or a Republican, he got us both with one ball.'"

"I asked him one time before we played golf, 'Bob, you want me to tie your shoes?' And he said, 'What would I do if you weren't here?'"

Jonesy didn't go through life with untied shoelaces, if you weren't sure. Try doing that with one hand.

"We were in a tournament one time against two young boys from Eldon," Deeken said. "We teed off and we got to our second shots --- we were hitting first, of course those two young boys were a little stronger than we were --- and Bob said: 'Watch this.' And he pulls a tee out of his pocket and tees his ball up.

"Well, these boys were kind of looking at us and Bob said to them: 'Anything wrong?'

And they said: 'Sir, we don't want to say anything, but you can only use a tee one time, when you tee off.' And Bob said: 'That's true for you. But when you teed off, you used two arms, didn't you?' Well, I used one arm back there and I'm going to use the other one here.'

"Those kids looked at me and Bob like, 'We're not going to say another word.' Bob just laughed and took the ball off the tee ... that's just the way he was.

"He was the life of the party ... I'm going to really miss him. All the things we did and the fun we had and the laughs we had, it was my privilege to be his friend."

We're all unique, but Bob Jones was in his own unique, one-of-a-kind category.

As good as it gets.