Arc Madness: Falcons
use shooting display
to advance to Final 4 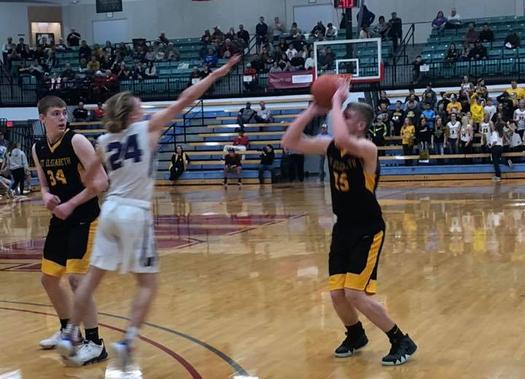 With help from a screen by Brady Heckemeyer (34), St. Elizabeth's Brock Lucas gets ready to launch a 3-pointer during Saturday's Class 1 quarterfinal game with Meadville at Moberly Area Community College.

ST. ELIZABETH, Mo. --- You can look at St. Elizabeth's second straight trip to the Final Four in one of two ways.

Been there, done that.

Been there, finish that.

"If we win the state championship," Hornets coach Dillon Tenholder said with a smile, "that wouldn't be bad to put on a t-shirt."

While the Hornets will be making their second Final Four appearance in 12 months, the wait the Blair Oaks Falcons has been a bit longer --- 228 months. To save you from the calculator, that's 19 years.

For the Tipton Lady Cardinals, who we'll look at tomorrow, the number can't be quantified.

Because it's hard to put a number on never.

EVEN THOUGH THE HORNETS RETURNED all five starters from last year's team, getting back to Springfield was hardly a guarantee.

"We knew we'd have a target on our back from last year," said Tenholder, who's in his third year with the Hornets. "Everybody knows you've got everybody back and everybody's gunning for you.

"To be able to get there once is a great achievement. But then to get back and still get it done, that's a whole different monster."

Last season was one to remember, to be sure, a third-place state finish. But the Hornets couldn't wait to get back at it --- although in their spare time, most of these guys played pivotal roles in winning a state baseball championship last spring.

"They're very excited, they're ready to go," Tenholder said. "The entire season, from summer ball through this whole year ... it's been a long wait since stepping off the court in that third-place game last year."

The wait is almost over.

The fourth-ranked Hornets (24-5) will meet the seventh-ranked Golden City Eagles (27-2) in the Class 1 semifinals at 8:30 p.m. Thursday at JQH Arena in Springfield for the right to play for the state title 4:30 p.m. Friday.

Two more wins for the program's first state championship. For both schools.

"Obviously, our guys want to get the job done," Tenholder said, "but we try not to focus on it too much. I don't really like the term Unfinished Business, because even if you have everybody back, it's still a different team.

"But being here last year, I think, is huge for us.  It's hard to replicate it, the experience in general, you know what to expect, It just makes everything easier because you have a lot less anxiety about what's going on."

"They're kind of a three-headed monster for them," Tenholder said.

Think they can shoot? In Saturday's quarterfinal win over Meadville, Hornets did something you just don't do --- hit their first 10 3-pointers.

You can't do that in an empty gym.

"I've never been a part of anything like it, you can't start a game any better," Tenholder said. "When you come out like that, the basket starts to look like an ocean."

Now this --- the final two games for St. Elizabeth's super seniors who've meant so much to this program.

"Anytime you can play at the Final Four," Tenholder said, 'it's an honor and achievement in itself. I had a former coach tell me that making it there is one thing, everything else is gravy.

"But obviously, we want to win state championship, all four teams do. We would love to send the seniors out on top, especially after all the work they've put in and for what they'e helped us build here.

"Would it be a disappointment if we didn't? Sure, but the season certainly wouldn't be a failure."

WARDSVILLE, MO. --- LIKE THE HORNETS, THE FALCONS had their own Come to Naismith moment at the end of last season, but their Final Four dream was stopped in the quarterfinals.

Now, they're headed to Springfield.

"It's very satisfying, knowing that we walked out of the gym in Bolivar a year ago after the loss to Springfield Catholic," Blair Oaks coach Ryan Fick said. "When we had our postseason meetings, we set the goal to get back to that spot with an opportunity to go one step further.

"That's what we had our sights set on."

There are other similarities between the Hornets and the Falcons --- Blair Oaks just seems to it do slightly better (the Class 3 Falcons beat the Hornets 67-56 on Jan. 7).

Both are dynamic, inside and out. For the Falcons, it's the 6-9 Twin Towers presence of the Northweather brothers, senior Eric and sophomore Luke, and 3-point snipers beyond the arc, most notably sophomore Quinn Kusgen.

If you were the opposing coach, coach, how would you stop Blair Oaks?

"That'," Fick said with a smile, "is a good question. It's difficult. Teams have tried different things, like Fair Grove (in Saturday's quarterfinals) --- I thought they did a really good job of clogging the paint and doubling down on the post, and really being physical.

"They were daring us to make jump shots and we were fortunate that we made enough of them."

From here on out, however, it's going to get a lot tougher for the top-ranked Falcons (28-2), who will meet second-ranked and perennial power Cardinal Ritter (23-6) at 8:10 p.m. Friday at JQH Arena in Springfield.

"Wow, they're all great teams," Fick said. "You've got the tradition of Cardinal Ritter and Charleston, who've won 18 state championships between the two (seven for Cardinal Ritter). That's a lot. Then our team and Monroe City, we've been there before but it's been a while."

Fick knows all about the last time Monroe City made it to the semifinals, back in 1995.

"I was actually a senior in high school the last time they went," he said. "They beat us (Fatima) in the quarterfinals."

Fick will have to wait for that possible revenge. First things first, you must deal with Cardinal Ritter, which has won 13 of 14 --- the lone loss was to a team out of Chicago by seven points.

"They have athleticism and size --- this is one of the few times this season we've played a team that can come at us with similar size (two 6-foot-8 players)." Fick said. "And their guards are quick and they really get out guard."

None more so than Luther Burden, a 6-0 junior who's considered a five-star football recruit at wide receiver. "He's being recruited by basically every Power Five school in the country," Fick said.

But it's another 6-foot junior, Mario Fleming, who leads the Lions in scoring (19 ppg.), while 6-8 senior Garry Clark sets the pace in rebounds (8 rpg.)

For the Falcons, who've won 20 straight, Eric Northweather leads the team in both --- 20 ppg., 10 rpg., to go along with three assists and a team-high three blocked shots. Brother Luke is at 16 ppg. and nine rpg., while Kusgen is at 15 ppg. and leads the team in 3-point shooting.

Kusgen hasn't just be in a zone lately, he's been in the O-Zone, the stratosphere.

You might call him the Mighty Quinn (Google it, Mr. Kusgen). He hit the shot that will forever live in Blair Oaks, a half court nothing-but-net heave at the buzzer of the second overtime in a two-point win over Tolton in the district championship game, then followed that up by hitting seven 3-pointers in sectionals and five in the quarterfinals.

"He's obviously been huge for us," Fick said. "The biggest thing you see with Quinn right now is his confidence, it's fun to see."

There's plenty to go around.

"The fun thing about this group," Fick continued, "has been watching them jell together, these guys really trust each other. When you watch us play, you see the ball movement --- they'll make the extra pass, because they know the next guy is going to make a good decision."

There's also plenty of excitement to go around, from the team to the town

"Our guys are extremely excited," Fick said. "Not only for the opportunity to play in the Final Four --- regardless of who you're playing, that's exciting --- but Missouri State is a tremendous venue.
On top of that, you get to play a team like Cardinal Ritter.

"Our support has really started to grow, once we got out of districts. And then the way the district championship game ended, I think the excitement level has grown even more, we've had a huge following.

"The players, the fans ... everybody's looking forward to it."

Buckle up, it should be a heck of a ride.