rally past Tolton in district semis 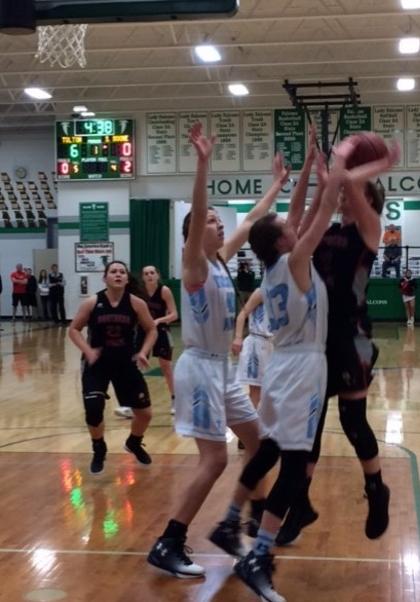 Southern Boone's Skyler Beeson has her shot blocked by Tolton's Laura Elfrink in th​e first quarter of Wednesday night's district semifinal game at Blair Oaks. Beeson got the last laugh, however, as she finished with 21 points to help the Lady Eagles rally for a 51-43 win.

Wednesday night, those 16 months came down to six minutes.

Thanks to those six, splendid minutes, the dream has been extended for at least two more days.

With the game and season on the line, seniors Skyler Beeson and Kylie Shoot came up big at the biggest moment, sparking a game-ending 20-7 run to rally the Lady Eagles past the Tolton Lady Trailblazers 51-43 in the Class 3 District 9 semifinals Wednesday night at Blair Oaks.

"I just told the girls how much I loved them," Lady Eagles coach Tony Phillips said moments after game, "because we were down six, we were down four ... it was a fight the entire night, but they did not quit.

"They (Tolton) had everything going their way, banking in 3s and getting to the free throw line, but we found a way to pull together and win, that's just who they are."

It certainly is who they are, because these girls --- led by a special class of nine seniors--- have won like no other group in school history. They're an eye-popping 51-8 the last two seasons, they went to the school's first Final Four last season, and they're currently ranked fourth in the state this season.

And yet, they were only the third seed in this district that's more loaded than Bill Gates' bank account.

"We knew going in that we were going to have to be on top of our game," said Beeson, who led the winners with 21 points. "We were down, but we fought back.

You figured this would be awesomely close --- and it was. The first half featured no less than nine lead changes, with the second-seeded and sixth-ranked Lady Blazers (20-6) holding an 8-7 lead after one, before the Lady Eagles (22-5) scored the final five points of the first half to take a 23-19 lead at the break.

Tolton led 32-31 after three and the margin was 36-31 with six minutes left, but that's when the tandem of Beeson and Shoot, who finished with 17 points, took control.

A suffocating Southern Boone full-court press made it possible, as the Lady Eagles forced a rash of turnovers down the stretch. The 5-11 Beeson tied it on a 3-pointer with 4:59 left and after an immediate turnover, the 5-7 Shoot canned a 16-footer five seconds later to give the Lady Eagles a 38-36 lead.

"I think we had back-to-back steals," Beeson said, "and that really got us going."

The dynamic duo scored 18 straight points down the stretch, nine points from each.

"Everybody in Ashland, everybody in Red and Black, wanted those two to have the ball and to take over," Phillips said. "And they did."

The loser of this game would likely have beaten the vast majority of Class 3 district champions around the state. Unfortunately for the Lady Blazers, who received 14 points from Haleigh Berrey, they were in the wrong place at the wrong time.

"We're going to have to bring it again," Beeson said.