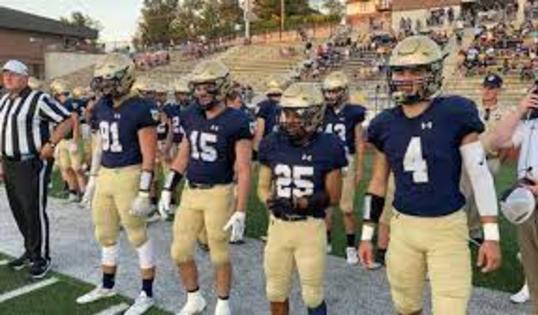 JEFFERSON CITY, Mo. —- When the clock struck 00:0 at about 10 p.m. on Dec. 4 last year at Adkins Stadium, high school football‘s ultimate dream had come true for the Helias Crusaders.

No, they weren't a perfect football team. But in the end, the Crusaders could not have done any better.

“That was a great season and it’s certainly something we’ll never forget,” Helias coach Chris Hentges said. “But that doesn’t do us any good this year.

“This is a new team with new players.“

Indeed. This year’s dream of a second straight undefeated state championship season was gone in about three minutes in August.

“We didn’t have a lot of game experience and we fell behind early,” Hentges said of the season-opening loss to Hannibal. “We were behind three scores before we knew it, and you can’t beat good football teams like that.

“Then our game plan, which was to run the ball a lot more than we did, kind of went out the window.”Hannibal led by two touchdowns after three minutes —- “Things unraveled from there.” —- and the Pirates went on to beat the Crusaders, 54-20.

But ever since, Helias has rattled off three wins by a combined 125-28.

“Everyone was disappointed after losing to Hannibal, but we’re really happy with the way they’ve responded,” Hentges said. “I applaud our senior leaders for that.“

A couple things are evident about those lopsided wins. Two came against a clear drop in competition from Hannibal, Hickman and Granite City, Ill., teams Helias walloped by a combined 90-6.

The third was a 35-22 win over always-tough Battle.

“That’s what you always want to see, improvement each week,” Hentges said. “Especially with a young team.”

One of the reasons for improvement from week one to week two was unquestionably the return of two way starter and senior Cole Stumpe, a returning all-state receiver.

Especially when you consider this team has 15 new starters, so any returning senior starter is a welcome sight.

There's no replacing multi-talented all-state quarterback Jacob Weaver. Shed no tears for Helias, however, because 6-3 junior Drew Miller has been solid in his first four starts.

“He doesn’t have a lot of game experience,” Hentges said, “but he’s got a big arm and throws the deep ball really well.”

“I think our strength probably lives up front,” Hentges said. “They’re inexperienced, but we’ve got some big physical kids up there and they move pretty well.”

Win or lose, it won’t be for a lack of effort.

“We’re better than that.”

They’ve proven as much year after year, decade after decade.

“Looking back on my 30 years at Helias,” Hentges said, “I can tell you that some of our best seasons started with disappointing losses.

“That’s what we hope happens this year.”

Don't bet against it.