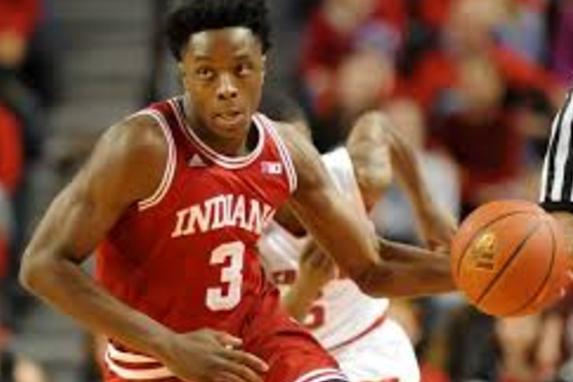 JEFFERSON CITY, Mo. --- If you saw him in high school, you knew he was special.

He authored so many of those jaw-dropping moments, those moments that made fans put another initial in his name, an M right right in the middle.

The soft-spoken Anunoby is a true freshman with the Indiana Hoosiers and he's been a significant factor in the team's surge into the NCAA Tournament's Sweet 16.

Like the Hoosiers' 73-67 win over the Kentucky Wildcats in the second round Saturday.

"Kentucky's one of our biggest rivals, their fans hate us," Anunboy said. "So that was a lot of fun."

"You can tell he's really come into his own during the course of the season," Thompson said. "He's really worked at it, his body is starting to fill out and mature, he's playing with confidence ... he's a major contributor on a Big Ten championship team and a team that's making a run in the national tournament.

"So it's been exciting not only for me, but for everybody who knows him and has followed him through his career."

"I have a hard time sitting down on the couch, I have to stand up," he said.

Just 10 months ago Anunboy --- who won't turn 19 until July ---was wandering around the hallways at JCHS. Is Thompson surprised he's made this impact so quickly?

"All that's coming together and as a result, he's on a big stage right now having a lot of success."

Hopefully, area fans appreciate what we had in our gyms and on our fields in recent years, two young men who are now at the top of the heap at big-time college programs.

Last fall, it was Helias' Hale Hentges who made a football impact for national champion Alabama. Now, it's the 6-8, 230-pound Anunoby with the Hoosiers, who have a realistic chance of winning a national championship.

"We were spoiled," Thompson said.

ANUNOBY DIDN'T PLAY ON THE VARSITY his freshman season under Thompson, because the Jays had a strong senior class and O.G. wasn't quite physically ready for it.

That changed. He started every game his final three seasons, was a difference-maker as a sophomore, then grew into a dynamic player during his all-state junior and senior years.

Early in his sophomore season, Thompson realized he was dealing with something special.

"He was always willing to work, and he had goals for himself of what he wanted to accomplish throughout his career. He was blessed with some of the tools that a high, major college basketball player needs --- his size (6-8), his length (a wingspan of 7 feet, 6 inches) and his athleticism (40-inch vertical leap). He's built to play basketball, there's nothing he can't do.

"But he never took any of that for granted."

Despite his size, Anunoby would play point guard for the Jays. Or shooting guard. Or the post. He could basically play all five positions.

"It would have been easy to turn him into a back-to-the-basket post player," Thompson said. "But I think one thing he benefited from was that we gave him a lot of freedom and that helped him develop his perimeter skills as well as his post skills.

"That made him a very versatile player and I think he's showing that right now."

Anunoby averaged 19.1 points and 8.6 rebounds as a senior, after basically averaging a double-double as a junior, 21.3 and 9.9. But now, he's being used more as a lock-down defender with the Hoosiers.

"He put up really big numbers in high school, but he always understood the importance of defense," Thompson said. "He's a very good help-side defender and he could be one of the best defenders you could see in high school.

Murray was not much of a factor.

"OG, when he gets his defense going, he's one of a kind," Indiana's 6-8, 240-pound senior Max Bielfeldt said in a story on IUHoosiers.com. "I've gone against him one-on-one in practice. And you think you have something, a fake or whatever, and he has that ability to get a hand on everything.

As you would expect, there's been a learning curve.

"In college," Anunoby said, "you're playing against NBA players almost every game, especially in the Big Ten. At the beginning of the year, I was struggling with my hands and I fouled a lot. But I'm not really doing that anymore.

"I've been more focused and paying more attention to details."

Anunoby is averaging nine points in his last five games and in his two NCAA games, he's 9-of-11 from the field and scored 21 points.

"He's been on a good move really the entire Big Ten and now into March," Crean said in a recent interview. "OG has a lot of potential; he's going to be an outstanding player."

To be sure, Anunoby has earned his time on the court, beating out other talented players --- talented, as you would expect --- along the way.

"As freshmen, you have to find any way you can to get on the floor," Thompson said. "Once you do that, anything else you do positive is going to be a feather in the cap. You get out there because you're a good defender and then you start making shots, running the floor and making the hustle players, you're going to get more minutes. That's what O.G. has done.

"He keeps getting more and more minutes, and he's usually on the floor down the stretch in the close games. That's what really matters."

ANUNOBY IS LIVING IN THE RAREFIED AIR of college basketball.

He's being noticed and mentioned nationwide by the big boys, getting rave reviews from ESPN analysts and TV announcers like CBS sports leading man, Jim Nantz. Within the last six weeks, Nantz has handed out accolades to, among others, Peyton Manning, Jordan Spieth and OG Anunoby.

That would be considered good company.

And right now, Anunoby --- who some consider a future NBA lottery pick --- is up to his neck in basketball tradition. Besides playing for Indiana, he was just on the court against Kentucky and on Friday, he'll be on the court with the North Carolina Tar Heels.

That, also, would be considered good company.

"I talked to him Saturday morning before the Kentucky game," Thompson said, "and he brought up the whole thing about playing Kentucky. And now, it's going to be the same with North Carolina.

"But my come back to him was, 'You know, that name on the front of your jersey isn't too bad, either.'"

Said Anunoby: "We belong, I know we belong."

Our conversation Tuesday night was interrupted when OG received a phone call from Crean. Some calls, you should probably take.

"Sure," not certain he would, since he surely had better things to do.

But he did, just minutes later. That's who he is. OG certainly doesn't say much, but he's a flat-out good guy and reliable to a fault.

"He's a very private young man, but he's very funny once you get to know him," Thompson said. "He's fun to be around, he cares about people, he's selfless and as much success as he's had, you'd never know it when you talk to him. He doesn't take anything for granted and I respect him for that.

"He's just a good guy and his priorities are in line ... it's easy to root for him."

In Indiana's first-round win over Chattanooga, Anunoby had a steal and a clean break down the court. You had a good idea this wasn't going to be a layup.

He didn't finish his thought, but he did finish a jaw-dropping, 360-degree dunk.

"He was a highlight reel waiting to happen for us," Thompson said. "He could do things most high school kids just can't do."

Most college guys can't do them, either.

"We see it in practice so much," senior Ryan Burton told the IU website, "but you always want to see more."

Lucky for us, we will.