JEFFERSON CITY, Mo. --- Normally, the headline would be about the Jefferson City Jays winning the tournament championship.

This, however, wasn't a normal day.

This day was more about how the Jays got there, not how they won it.

Squaring off against rival Blair Oaks for the right to play in the championship game of the Capital City Invitational, the Jays and Falcons produced an instant classic at Vivion Field.

Tyler Wood's two-out RBI single in the bottom of the 10th inning Saturday lifted the Jays to a 4-3 win over the Falcons, before Jefferson City rolled over Fatima 14-3 in half the time, five innings, to win the tournament championship.

"It's really a testament for any team to go through a four-game, two-day tournament and win it. Your pitchers have to step up, and not just your top three or four or five guys, but your sixth, seventh and eighth guys. But we feel like we're pretty solid with seven or eight guys to go out there and get outs for us."

It's the second tournament title in three years for the Jays, which is impressive --- especially when you consider you have to go back to the 1990s to find the one before 2014.

"Any time you win a championship, especially in a high-caliber tournament like this, it's important," Ash said. "We went 20 years without winning one, you just never know when those opportunities are going to come, so our guys are extremely happy and proud of what they accomplished."

As they should be.

BUT IT WAS THE FINAL GAME of pool play, this classic against Blair Oaks, that made it all possible.

It certainly didn't make the championship game irrelevant, but it made it anti-climactic, nonetheless.

"It really did," Ash said. "That was one of the better baseball games I've ever been involved in, because every runner that got on base was important, every pitch and every swing and every ball that was put in play was important.

"It was two good teams, a lot good pitching and timely hitting ... it was a championship-level game. Blair Oaks is going to win a lot of games, just based on the talent that they have."

Great game to win, tough game to lose ... but a fabulous game to be a part of.

"It was a great ball game, both teams played their butts off," said first-year Falcons coach Travis Henke, who played for Ash at Blair Oaks from 2004-07. "It would have been great to beat my former head coach, but he's got a good ball club. They made the plays and got the hits they needed to win the game."

The Falcons (5-3) scored two runs in the top of the third to take the lead, before the Jays (13-1) scored one in the bottom of the frame and two in the fourth to take a 3-2 lead. Blair Oaks tied it with a run in the fifth, and seemed destined to take the lead in the sixth.

With runners on second and third, Jacob Weirich recorded a key strikeout against the first batter he faced, before Adam Schell belted a sinking line drive to center.

Then came the play of the game --- a diving catch by sophomore center fielder Tyler Bise to end the inning, saving two runs and saving the game.

"That was a tremendous play," Ash said. "Tyler will drive you nuts at times, because he's so aggressive and there are times he shouldn't be. That was obviously a time he needed to be and he came up big."

Bise made the play of the game, but Grant Wood had the biggest hit --- although the junior shortstop also had his own defensive gem. After a pair of two-out walks in the 10th, Wood drilled the game-winning single to right center on a 2-2 pitch to end the epic battle.

"That's why he's in the three-spot," Ash said. "He fouled off a couple down the (third base) line because he was early ... he was gearing up for the upper-80s. But the more he fouled off and the more pitches he saw, I knew he was going to barrel one up sooner or later. And he did."

Weirich went the final 4 2/3 innings to get the win, while the loss went to Ethan Rackers. The starter for Blair Oaks was Jason Rackers, who was a warrior in his no-decision, going nine innings and approaching 120 pitches.

"I asked him how he felt before the seventh inning," Henke said, "and he said, 'I want the ball.' That's what I want to hear, he's a competitor and he's going to compete like that every game."

"But I finally had to pull the plug."

IN THE TITLE GAME, let's just say the Jays wanted to get out of there, they had other things to do.

"Maybe we should have prom every night after we play," Ash said, "because they were ready to go."

After the Comets (6-6) scored a run in the top of the first, the Jays four runs in the bottom of the inning, three runs in both the second and third, and four more in the fourth to blow open a 14-1 lead on their way to winning by the 10-run rule.

"It was one of those games," Fatima coach Scott Kilgore said. "They were riding high after that Blair Oaks game --- I was hoping it would be the opposite effect, that they would be kind of extended. But that wasn't the case, you've got to hand it to them.

"But I'm proud of the boys for fighting and pushing through. That's the first time we've ever been in the championship game of this tournament, so you have to give them credit for that. Second place against these teams, that's not too shabby."

Taylor Hartman went four innings to get the win, giving up one run on three hits.

"He stepped up and did a good job," Ash said. "Obviously, we were able to score some runs and give him a little breathing room, and I think that took a little pressure off him."

Gavin Strobel banged out three hits, including a double and triple, and drove in five runs. Wood followed his Game 1 heroics by going 2-for-2 with a double and three RBI.

"We're proud of them," Ash said of the team's 13-1 start. "The time, energy and effort they've been putting in, all the grinding in the summer, the fall and the winter, it's nice to see the kids reaping the benefits of all that hard work.

"Winning this tournament is nice, but we want to be playing our best baseball toward the end of the year, and hopefully get in the state playoffs and see what we can do."

They could be dangerous.

The Jefferson City Jays mug for the cameras after winning the championship of the Capital City Invitational on Saturday at Vivion Field. 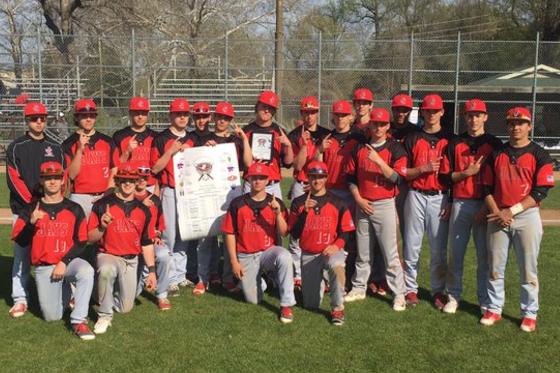