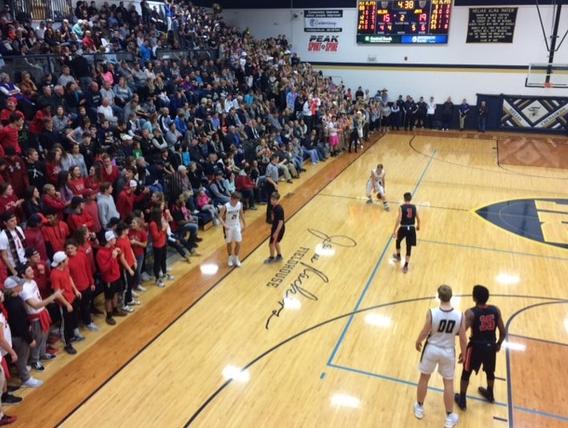 JEFFERSON CITY, Mo. --- One team's winning percentage was 85 percent, the other's was 43 percent.

One team was ranked No. 4 in the state, the other had lost six of eight.

What's it all mean?

Not much. It's worth about as much as a Bernie Sanders campaign sticker.

Welcome to Rivalry Night, Jefferson City vs. Helias, an always entertaining affair that's a welcome relief from the January blahs.

In the end, Tuesday night's margin was nine, but it was edge-of-the-seat fabulous for nearly three quarters. But just as they did last week, the Jays couldn't hold a third-quarter lead, as the Crusaders finished the third with a 20-4 explosion to take charge and never look back in a 62-53 win before an overflow crowd at Rackers Fieldhouse.

"I'd put this rivalry up against any rivalry in the state of Missouri, I don't care what class you're talking about," Helias coach Josh Buffington said. "It's so much fun to be a part of and the atmosphere is always so amazing --- you have to give a lot of credit to the kids on both sides, because this rivalry is as close to playing in a Division I game as you can get.

"For 16 year-olds to make plays in atmosphere like this, with the pressure they feel, I have a lot of respect for them. At the same time, they need to realize how lucky they are to play in game like this."

Take the last three seasons. In two of those, Helias went the Final Four and in the other, the Crusaders were ranked No. 1 at times during the season.

And the Jays won two those three, both in double-overtime classics. Of course, the Jays had a guy named O.G. Anunoby, who's now an ESPN Top 10 play waiting to happen for the Indiana Hoosiers.

You could say O.G. helped the cause.

This affair, as usual, was off the chart with intensity. The teams traded body blows in the first quarter, when frayed nerves and tight rims allowed the Crusaders (12-2) to edge out to an 8-7 lead.

The Jays (6-9) had their best moments in the second quarter. Rae Quan Davis looks to be a difference-maker for this team --- the junior became eligible at the semester break --- as he scored six of his team-high 20 points in the frame to spark Jefferson City to a 27-26 halfime lead.

"He's a player," Buffington said of the 6-3 Davis. "He's so explosive athletically and so physically strong, and he's really good with both hands."

Jefferson City opened the second half on back-to-back 3-pointers by freshman Brennan Jeffries and sophomore Ryan Nilges, as the lead expanded to 33-26.

That, however, would be that.

Last week, the Jays blew a 19-point lead late in the third quarter in a two-point loss to Pacific. Tuesday night, the seven-point lead evaporated before you could say Where's O.G. when you need him?, as the Crusaders finished the frame with a 20-4 run to to a 46-37 lead into the fourth.

The last 90 seconds of the third capped the game-changing burst, as Helias held the ball until the final seconds. After Landon Harrison's shot was blocked, he got the rebound and was fouled on the follow with no time left.

"They took Landon out of the flow in the first half, give all the credit to Jeff City," Buffington said. "It forced our team to become stagnant and we can't do that.

"But after the half, we really got into more of a flow."

This was only a slightly above average night for the 5-11 Harrison, who came in averaging 28 a game. You think he wanted this one?

"I've seen Landon dialed in a lot since he was third grader," Buffington said, "but I don't know if I've ever seen him as dialed in as he was at practice on Monday. He wanted this really bad, and he wanted it most of all for our seniors."

You expected the Jays to make a run at the Crusaders in the fourth quarter and at least cut it to a one- or two-possession game. That's how this series rolls.

But on this Rivalry Night, nothing doing --- Helias led by as many as 13 down the stretch while Jefferson City could get no closer than seven. The Crusaders, who received 11 points from Nathan Bax, has now won nine of 11 in the series, but only one of those nine has been by double-digits.

The struggles continue for the Jays, who've now lost seven of nine after starting the season 4-2. But they just might be the best 6-9 team in the state and with the addition of Davis, they could be a dangerous animal in the coming weeks.

"They've lost a lot of close games this year," Buffington said. "They're young, as we are, and I'm sure coach (Blair) Thompson will do a great job with them and have them peaking at the right time."

Another overflow crowd was on hand Tuesday night for the annual crosstown showdown between the Jefferson City Jays and Helias Crusaders at Rackers Fieldhouse.