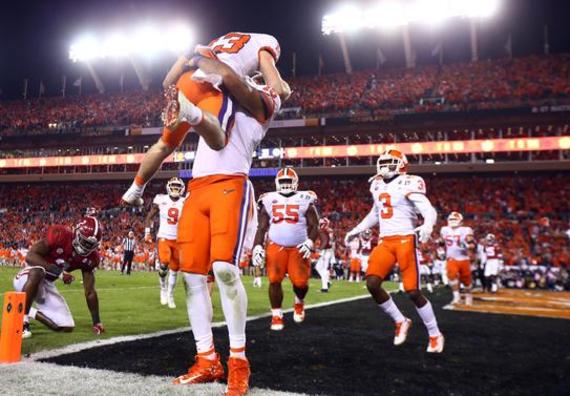 Clemson receiver Hunter Renfrow is hoisted into the air after catching the game-winning touchdown Monday night.

'20 minutes:' Hentges
striving for that
feeling once again

The college football season literally came down to the final second.

After hundreds of hours of mundane workouts, practices and months of nondescript games, we were given one glorious, final second.

The phrase instant classic has become more worn out than your garden shoes. But this was such an INSTANT classic, it almost went back in time.

One glorious, final second when Clemson made one final, glorious play. And left the Alabama Crimson Tide being littered with the wrong color of confetti when it was over.

This game was certainly a WOW, the ultimate example of the thrill of victory, the agony of defeat.

"It's hard to sleep after something like that," Alabama sophomore tight end and Helias grad Hale Hentges said. "Anything that causes your adrenaline to spike like that, it's hard to come down from. When you're laying in bed, replaying the game, on top of trying to come down from the emotional high ..."

The Crimson Tide were about a 7-point favorite to win its second straight national title, its fourth in five years and fifth in eight years. But on this night, they were denied.

You can only imagine the mood in the Alabama locker room after the game, Was it anger? Disappointment? Sadness? Shock?

"I'd say all those things," Hentges said during our one-on-one conversation. "But probably the thing that stuck out to me the most was shock ... maybe we a got little too comfortable and ahead of ourselves, that we knew we were going to win and it was going to be a done deal.

"It kinda felt like there was a death in the family, that's how the room felt, that's how I'd describe it."

The feeling was in stark contrast to last year, when Hentges said the 20 minutes after Alabama won the national championship were the best 20 minutes of his life.

"I'd say this was the exact opposite," Hentges said. "Definitely, it hurts. It hurt my heart to see our seniors --- we had one helluva senior class, especially our senior tight ends --- seeing them upset and knowing we couldn't get it done for them."

Hentges has been involved in two of the most memorable games in college football history --- Monday night's rematch on the heels of last year's thrilling 45-40 win over Clemson in Round One.

"It really hasn't set in, because you're just competing and you don't really think about the magnitude of what's going on around you," Hentges said. "But (Tuesday) morning, after seeing some of the highlights and stuff on Twitter, you really can step back and realize you were a part of history.

"These two games will go down as part of a series that was great and monumental getting the college football playoffs started. Just knowing you were a piece of history, that's something I'll hopefully be able to tell my kids and my grandkids about for a long time."

The game was played at the home of the NFL's Tampa Bay Buccaneers, Raymond James Stadium, and it drew a stadium-record crowd of 74,512. But it wasn't loud, it was ...

"Very, very incredibly loud," Hentges said emphatically. "It was a great atmosphere, it really was, like it should be for a national championship game."

The departure of Alabama offensive coordinator Lane Kiffin just a week before the game wasn't really a factor, Hentges said. "Our base offense pretty much stayed the same, but we had a couple new wrinkles that we didn't have with Kiffin."

The offense, as it turned out, wasn't the problem --- 31 points is usually enough, especially since Alabama's defense was regarded the best in the country and one of the best in college history. This unit, after all, had scored almost as many touchdowns (11) as it had allowed (13) entering the game.

"I did," Hentges said. "It's something they've done all season, they've put us on their backs. But sometimes, you just have to tip your cap to the other offense.

"What can you say about (Clemson quarterback) Deshaun Watson and their offense? They are incredible. I think he should have won the Heisman, because he was phenomenal, especially on that last drive. It seemed like every single throw was perfect.

"That's what needed to be done in order to beat us."

Hentges watched Clemson's game-winning drive --- and the game-winning touchdown with 1 second left --- on the stadium's Jumbotron.'

Hentges' playing time was restricted Monday night --- he missed the semifinal game against Washington --- as he suffered a partially torn left hamstring in practice about 2-3 weeks ago.

"It's not the best right now, it's pretty sore," he said. "If you've ever had a hamstring injury before, people know how hard it is to just function normally, especially in football.

"I honestly didn't think I'd be able to play, because I couldn't even walk after it happened."

Hentges will take a couple weeks off to rest, heal and clear his mind. Then, the process will start all over again with a month of team workouts, which will be followed by spring practice.

School resumed Wednesday at Alabama, two days after the national championship game --- something that was in place long before Alabama made it there.

"They always do it two days after the national championship game," Hentges said. "People down here kind of expect national championship after national championship, and that's not always the case. It's college football ... I'm definitely disappointed, but it shouldn't put a damper on everything we've accomplished this season (14-1, ranked No. 2, SEC Champions, third straight berth in the four-team College Football Playoffs.)

"This is just another one of those things that's part of life. At the end of the day, you've got to remember --- it's just a game. You make great friends, you learn life lessons ... it's something I hope people, especially our players, can take from this, the silver lining in defeat."

If you weren't sure, Hale Hentges has perspective, both on and off the field. And as agonizingly glorious as Monday night was, his life will never be defined by one second on the clock that turned the wrong way.