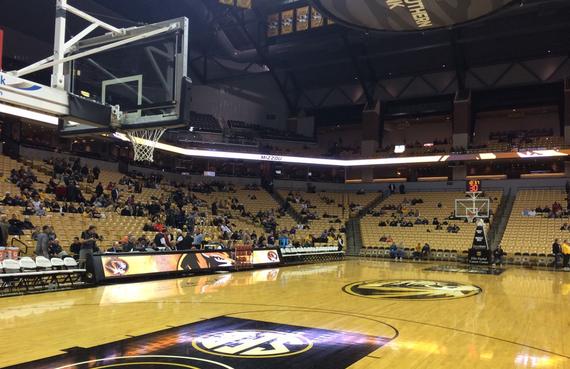 For the 2016 calendar year, the two biggest sports programs at Mizzou  --- men's basketball and football --- completed seasons that had a combined 14 wins for the second straight year. This time, it was 10 wins for the 2015-16 basketball season, four for football.

You have to go back to 1966 to find fewer wins at the school, when basketball won only three games and football won six.

This is the state of our Tigers.

With the start of a new year, however, brought the start of conference play and a dash of new hope. Wednesday night was the new beginning ...

Well, it didn't take long for the hope to be dashed. And perhaps, it was the beginning of the end for Kim Anderson.

It was announced at 9,400, but it looked half of that. And every one of those empty seats is co$ting the $chool money.

While losing their fifth straight, the Tigers (5-8, 0-1 SEC) actually led most of the way, thanks to a 16-0 outburst in the first half. This outburst might serve as Mizzou's highlight package for the season, and it came in a tidy 3 1/2 minute package. It turned an early 13-6 deficit into a 22-13 lead, the Tigers led 40-35 at the half, and the margin was still five points five minutes into the second half.

Nothing has changed. It looks like just another long, cold, lonely winter. Where's Quin Snyder when you need him, anyway?

You really have to feel for Anderson, for this is painful to watch. A favorite son of ol' Mizzou landed his dream job less than three years ago, and it's turned into a nightmare.

Did he inherit a mess from Frank Haith? You bet he did. But the mess has turned into a disaster.

The Tigers are now 24-52 in two-plus seasons under Anderson, and are 2-15 in their last 17 SEC games. If you haven't been paying attention, the SEC is to good basketball what Casey's General Store is to prime rib and lobster.

Mizzou has lost to Eastern Illinois, North Carolina Central and Lipscomb this season. At least we know, generally, where the first two schools call home.

Just a few hours before Wednesday night's game, Anderson received a vote of confidence from Athletic Director Jim Sterk. Uh-oh. If you've followed sports for any length of time, you know what that means.

In all likelihood, the end is near ... Vote of confidence = Kiss of death.

Who will this team beat, if not LSU? The Bayou Tigers had given up 206 points in their previous two games --- and neither game went to overtime.

So LSU isn't very good, either, showing less interest in playing defense than your grandma shows in playing Dungeons and Dragons. These Tigers, however, were able to beat North Carolina Central this season.

LSU has lost games by 34 points and 35 points to two teams (Wichita State and Wake Forest) who are not only unranked, they're not even receiving votes in the Top 25. Heck, even UNC-Wilmington is receiving one vote.

Mizzou still has 17 games left in the regular season, plus at least one game to play in the SEC Tournament. The math is ugly ... 5-26? Could this really happen? It's hard to think in those terms, but it could.