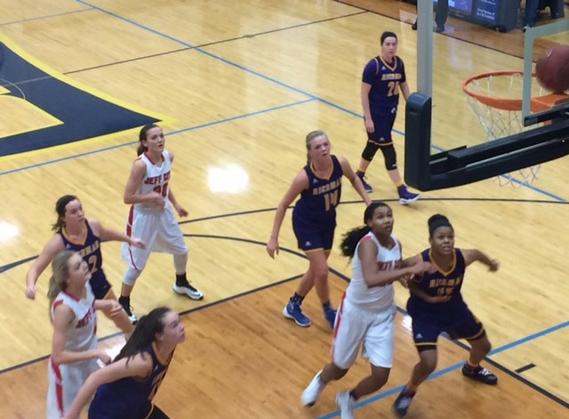 With the basketball hanging on the rim, the Lady Jays and Lady Kewpies battle for rebounding position during the fourth quarter of Friday night's game at Rackers Fieldhouse.

How sweet it is: Lady Jays capture

crown for first time since 2004

JEFFERSON CITY, Mo. --- The last time it happened, George W. Bush was in his first term as president, the Chicago Cubs were only 96 years removed from a World Series championship, and Brad Conway was blowing his coaching whistle in St. James.

Until Friday night, that is.

For the first time since 2004, the Jefferson City Lady Jays have captured the crown of the State Farm/KRCG Holiday Hoops Invitational, as they survived a brutally-cold shooting stretch to knock off the rival Hickman Lady Kewpies 44-38 in the championship game at Rackers Fieldhouse.

"It's exciting, it feels great," said Conway, in his second year as head coach of the Lady Jays. "The kids are excited, they've been working really hard --- they've bought into what we're trying to do and they're really locked in.

"We're going to have two days off and get back to work --- and we're going to start the second part of the season 0-0 when we come back."

That would be coach-speak at its best, because in reality, this young, inexperienced team will start the second part of the season 11-0.

"And," Conway added, "we have three potential starters who haven't been playing because they're hurt."

Those three might end up being the Tony Romos of the Lady Jays ... because these Dak Prescott replacements are awfully good.

This battle of two of the top-four Class 5 teams in the state started at a quick pace, as both scored almost at will in transition in the opening quarter.

Junior McKenzie Gourley was a one-girl wrecking crew for the Lady Jays, as she scored 11 of her 13 points.

"She was really looking to attack and she was getting that little floater to drop for us," Conway said. "She was really big for us, she kind of got us jump-started."

But at that point, Jefferson City hit the offensive wall.

The Lady Jays went scoreless for nearly seven minutes to open the second quarter, and finished the frame with just two points on 1-of-10 shooting with five turnovers. It allowed the Lady Kewpies to use a 13-2 scoring edge to take control at 25-15 at the half.

"We talked about dealing with adversity and knocking down some shots," Conway said, "and just doing what we've been talking about and working on. Finally, some shots started falling down and they kind of went cold."

Indeed, one cold spell deserved another.

Despite scoring only eight points in the third quarter --- that gave the Lady Jays just 10 points in two quarters --- Jefferson City was able to trim the deficit to 30-23 after three.

Neither team scored in the first three minutes of the second half, before a pair of 3-pointers by Lady Jays' senior Lexi Haug helped loosen the lid on the rim.

"Those were huge," Conway said. "That gave us a little confidence."

But the third quarter was just the start of the offensive misery for the Lady Kewps, who couldn't find their confidence or shooting touch --- they went nearly seven minutes to start the fourth quarter without scoring a point. Zero.

Some of it was good defense, but the Lady Kewpies also missed several great looks.

"Fortunately, they went cold and we were able to rebound the ball and be strong with it," Conway said. "And we did a really good job of locking down defensively and shutting off their middle stuff."

With Hickman going scoreless, Jefferson City put together the game-winning 13-0 surge the open the fourth, a run started on five straight points by Marshi Baird, and ended on a fast-break score by Sydney Crockett.

Four straight free throws in the final minute --- two each by Alaina Allsbury and Gourley --- helped seal the deal.

"We missed some free throws," Conway said, "but fortunately we made enough to extend (the lead)."

Extend the lead, win the game and --- for the first time since in 12 years --- earn the championship trophy.

Records are meant to be broken? Sure.

But this record wasn't broken, it was smashed, bashed, obliterated.

The old individual record for most points scored in the boys tournament --- now known as the Joe Machens/KRCG Great 8 Classic --- was 95 set by Parkview's Matt Miller in 1996.

It's a record that stood for 20 years, so it was no easy mark.

But Jarkel Joiner --- an explosive 6-1 senior from Oxford, Miss. --- made the new record his own, as he scored 41 points Friday to end his remarkable run with 124 points in three games. That shatters Miller's previous mark by no less than 29 points.

It was a rough week for Miller, indeed, whose name has disappeared from the record books. His single-game record of 42 points was also beaten by Helias' Landon Harrion, who scored 44 on Wednesday night.

Joiner --- who's signed with Division I Cal-State Bakersfield.--- also set a new record for most two-point field goals with 35, topping the mark of 32 set by Moberly's Brennan Hughes in 2009.

Friday's 41-point effort came in the Chargers' 73-67 win over the Jefferson City Jays in the seventh-place game at Fleming Fieldhouse, and came on the heels of his 40-point opening round night against Helias and 43-point output in the second round. Joiner entered the tournament averaging 35 points.

Records are meant to be broken? Sure.

But let's see somebody beat this one.