JEFFERSON CITY, Mo. --- It is the season for giving, after all.

Thursday night, the Jefferson City Lady Jays used a smothering defense to create a bundle of turnovers and build a 15-point lead after three quarters.

The Blue Springs South Lady Jaguars promptly returned the favor in the fourth quarter and cut the 15-point lead to one.

But the Lady Jays withstood their own bundle of giveaways, as Caitlin Anderson hit two late, crucial free throws to help Jefferson City escape with a 45-39 win over Blue Springs South in the semifinals of the State Farm/KRCG Holiday Hoops Invitational at Rackers Fieldhouse.

"It was just one of those games where things really didn't go our way, but fortunately, we were able to pull out a win."

There's certainly something to be said for knowing how to win.

"Some of the kids have been in situations like that, others haven't and it's still a learning experience," Conway said. "But we're learning how to win."

In this clash of Class 5 ranked teams, the fourth-ranked Lady Jays held a 9-5 lead over the sixth-ranked Lady Jaguars (6-2), before bumping the margin to 22-14 at the half.

After South used a 6-1 run to get within 23-20 midway through the third, Jefferson City put together what turned out to be the game-winning surge, a 12-0 burst to build a 35-20 lead heading into the fourth.

The Lady Jays were pressing the issue, and it was working.

"We talked about having energy," Conway said, "and I thought that was a great example of us benefiting from it. We got some deflections, we got some steals, we got some transition opportunities.

"But then, they were able to solve that and they flipped it on us."

Indeed --- the Lady Jays went from the press-ers to the press-ees, as a series of turnovers helped fuel a 17-3 explosion and get the Lady Jags within 38-37 with three minutes left.

Both teams struggled down the stretch; South had two possessions down three in the final 40 seconds, but both came up empty. It was still 42-39 when Anderson finally gave the Lady Jays some cushion, as her two free throws with 17 seconds left made it a five-point game.

"Those were big," Conway said. "Just like (Wednesday night), she comes out with foul trouble, we kind of went stagnant, she goes back in and reignited us. It was kind of the same thing tonight. I know she turned the ball over a few times, but she stepped up and made some shots when we needed them."

Anderson continued her splendid sophomore season with 20 points for the Lady Jays, who will face second-ranked Hickman (9-0) at 7 p.m. Friday for the tournament title.

The Lady Kewpies KO'd defending tournament champ Benton in the other semifinal.

"They're obviously a high-quality team," Conway said. "We've got to be ready to come out and play and give a great effort, and our ball security and taking care of the basketball has to be a little better than it was tonight."

The Helias Crusaders have faced two really athletic teams in the first two rounds of the Machens/KRCG Great 8 Classic this week.

This one also REALLY wanted to play defense.

And the Whitehaven Tigers do it really well, indeed.

After getting a series of great looks Wednesday night and piling up 88 points --- the third-highest non-overtime total in the 26-history of the event --- great looks were nowhere to be found Thursday night for Helias.

For that matter, making a simple pass wasn't easy.

The Tigers from Memphis, Tenn., raced out to an 11-1 lead to open the game and never looked back as they rolled to the 20-point win over the Crusaders --- and holding Helias to slightly more than half its point-total from the night before --- in the semifinals of the Great 8 at Fleming Fieldhouse.

The Crusaders (6-1) tried their best to hang around against the Tigers, but eventually wilted under the lightning-quick, suffocating, baseline-to-baseline physical pressure.

Helias, which finished with 21 turnovers, trailed 20-12 after one quarter and 30-22 at the half. Just one night after scoring a tournament-record 44 points, Landon Harrison was held to just one field goal before the break, but he did rally in the second half to finish with 17 points.

For the Tigers, who built the lead to 46-34 after three quarters, Cameron Jones led the way with 25 points.

The Jefferson City Lady Jays (white uniforms) and Blue Springs South Lady Jaguars engage in a battle for a rebound during the fourth quarter of Thursday night's game at Rackers Fieldhouse. 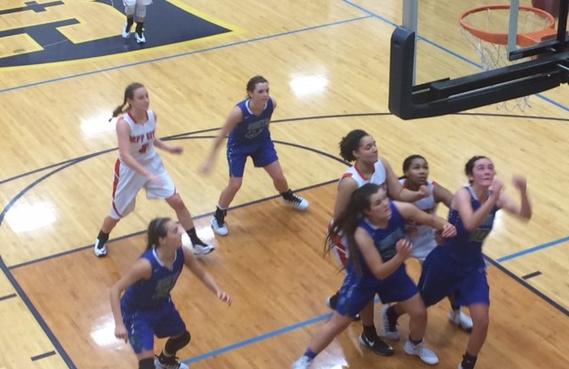