JEFFERSON CITY, Mo. --- Sometimes, things work out just the way they should.

As you know, it doesn't happen very often. So when it does, enjoy it.

Call this a Curtain Call for History.

Wednesday night's game between Helias and Oxford, Miss., was already decided. The Crusaders had won. But at the buzzer, Landon Harrison of the Crusaders was fouled.

Normally, you walk off the court and the game is over. As it should be.

But this time, the officials allowed Harrsion to shoot two free throws. As they should have.

Harrison was sitting on 42 points --- tied for the highest point total in the history of this grand holiday tournament, now known as the Joe Machens/KRCG Great 8 Classic. It's a tournament that's in its 26th year and has seen more than 200 games.

One free throw to history.

Just for the fun of it, another free throw to pile on.

The 5-11 junior finished with a record-setting 44 points, shattering a mark that had stood for 20 years, set in 1996 by Springfield Parkview's Matt Miller.

"It's definitely very exciting; it's a great feeling to get that," said Harrison. "But the most important thing is that the team won --- that's one of the biggest teams wins we've had in a while, I think."

Harrison continually brushed aside questions about himself and his record-setting night, instead focusing on the team. Helias coach Josh Buffington, however, wouldn't hesitate.

Buffington, too, is a team-first guy, to be sure. But when something like this happens, well ... can you put it in perspective, coach?

"I don't know if I can right now," he said. "Some of the things he did tonight, it was just amazing. He hit some big-time shots and had some big-time finishes. But the cool thing about Landon is that when you walk into our locker room, he's not going to act like he just had 44 and broke the Great 8 Tournament record.

"He's always more concerned about his teammates than he is himself, he's so unselfish."

Harrison may not look like a game-breaker, but he is. And he's an ankle breaker, too. He played a key role on last year's Final Four team, which begged the question --- did Buffington think he had something special last year, even when he was sophomore?

No. Buffington didn't think Harrison would be good last year, Buffington knew it when Harrison was 9 years old.

"I've known it since he was in third grade," Buffington said. "Landon is a very special kid, a special talent and he sets a great example for our program. I've never coached a kid as driven as he is, in anything he does. He's getting everything he deserves.

"The best compliment I can say about Landon is that I'm proud that my two sons (ages 9 and 7) look up to him daily ... he's their hero on the basketball court."

This turned into an highly entertaining affair played at a very high level. For the Chargers, they had a player --- 6-1 senior Jarkel Joiner --- who scored 26 points.

IN THE FIRST HALF.

"What do you say to your team at halftime," Buffington said, "when you think you've played one of your best halves of the season, but you gave up 43 points and 26 to one kid.

"He just hit so many tough shots, I think every shot he hit was contested."

Oxford led 25-24 after one quarter --- a quarter that featured six lead changes and four ties --- and 43-40 at the half. But after scoring 26 in the first half, Joiner would score only two points in the third quarter, when Helias (6-0) took control.

Harrison, who scored only 16 points in the first half, scored seven of his 28 second-half points during a 13-1 burst in the first four minutes of the third quarter, turning a 43-40 deficit into a 53-44 advantage.

"Landon plays best when his back's to the wall, when he feels like he has something to prove," Buffington said. "Obviously, he felt like he had something to prove tonight, going toe to toe with a Division I signee (Joiner has signed with Cal-State Bakersfield). Landon has offers on the table, but I think his best offers are still to come."

The keys, obviously, were Harrison scoring in bunches --- and Joiner not scoring at all.

"Our key at halftime was to stop their best player, because he killed us in the first half," Harrison said. "We really keyed on him in the third quarter ... I think our defense built off that and that helped our offense get going, as well. We had to shut him down and make somebody else beat us."

Joiner exploded late, scoring 12 points in the game's final three minutes to finish with 40 points --- the third-best total in tournament history. Terry Williams added 25 points for the Warriors, who certainly look like the team to beat in the loser's bracket the rest of the way.

But this night belonged to the Crusaders, who also received 16 points from Nick Brandt, and 12 apiece from Dalton Weaver and Marcus Anthony.

In particular, it belonged to Harrison, who entered the game averaging 27 points, but has scored 80 in his last two.

The game was never in the danger zone in the final quarter, and Harrison's point total had rolled to 42 points (the school record, by the way, is 46, set by Jamaal Tatum in 2001) with time running down as he raced to the hoop.

Whistle ... then the buzzer.

After a minute of hand shakes, the officials sent Harrison to the line ... with history resting on his curtain call.

"I was more excited than nervous," Harrison said. "It was a great atmosphere, it was just a good feeling."

"Man, it was a fun night," Buffington said. "But in less than 24 hours, we're strapping them up again. We can't celebrate it very long."

The heartbreak continues for the Jays. And this one was, especially, was a drawn-out painful experience.

The game was tied 40-40 heading to the first overtime, thanks to a big 3-pointer by Kamari Balton late in regulation. Nobody knew, but that was the start of things to come.

It was tied 47-47 after one overtime and 54-54 after two. The Jays seemed poised to win it in the third overtime after a Balton score with 17 seconds left gave Jefferson City a 54-52 lead. But the game that wouldn't end marched on when Oneal Swint --- who led the Warriors with 27 points --- hit a short jumper with 1 second left to force a fourth overtime.

Western then scored the first five points in the fourth OT and never looked back.

Balton ripped the cords for 25 points for the Jays (4-3), while Hudson Nilges scored 21, and Brennan Jeffries and Chuck Cooper both had 11. 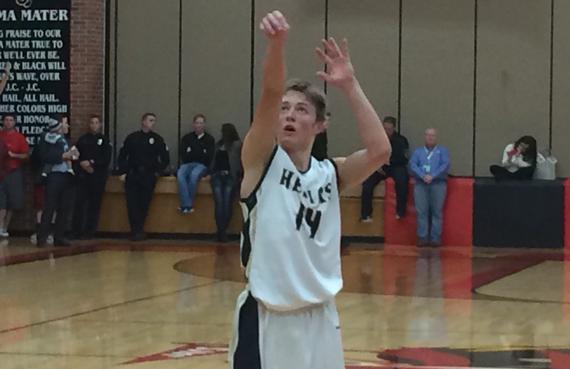 pours in 44 to set tourney record