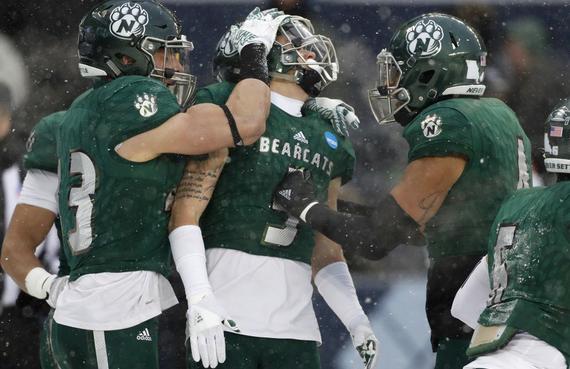 Northwest Missouri State's Jack Young is mobbed by teammates after making one of the biggest plays of Saturday's Division II national championship game with North Alabama with his interception in the end zone in the second quarter.

KANSAS CITY, Kan. --- It was football like it oughta be.

Cold, snowy, hard-hitting, defensive slugfest ... and snow angels? Sure, why not.

They had hot chocolate, too.

The winner by knockout and still the undisputed and undefeated national champion ... Northwest Missouri State!

What an amazing run by the Bearcats, winners of 30 straight, two straight national titles, and three in four years. They certainly couldn't have done it without this senior class, a class that finished an astonishing you-wouldn't-believe-it-if this-were-a-movie 55-2 in their careers.

"It's excitement and disbelief, just because it was so crazy to me that we'd actually pulled off what we'd be training for, what we'd been saying we were going to do the entire time," Bearcats senior safety Jack Young said on the heels of the Bearcats' 29-3 win over North Alabama in Saturday's Division II National Championship game.

"It was kind of a surreal moment. Me and my buddy, Kevin (Berg), looked at each other and said: 'Man, we actually did it.' It's just unbelievable; I was so happy and blessed to be there and share it with all my teammates."

They shared it on a brutally-cold day, with an air temperature of 12, a wind chill of minus-5 --- making it the coldest title game in D-II history --- and blowing snow so deep you couldn't see the yard lines.

"For fans and people there watching, the weather probably wasn't the best," said Young, a 2012 graduate of Jefferson City High School. "But for us, it really didn't effect us because we practice in it all the time, with us not having an indoor facility. It was like second-nature to us.

"I was so locked in on playing defense, I really didn't feel it. When you're focused on the game and in a big game like that, stuff like the cold is just a mindset, so we put it in the back of our heads just went out there and played football."

"I always grew up playing football and stuff in snow around the neighborhood, so it did't bother me a bit," Young continued. "We used a lot of Vaseline (it works as insulation), went out there without sleeves, and just tried to take care of business.

"No toughness, no championships, that's what we kept telling each other."

They did have some help staying warm. Massive jet heaters were on the sidelines, and chicken soup and hot chocolate were available. After the game, several Bearcats made championship snow angels instead of giving a Gatorade bath to head coach Adam Dorrel.

Young said thanks, but no thanks, to the snow angels.

"After my adrenaline quit kicking in, it was pretty cold out there," he said. "I wasn't about to get on the ground and start putting my arms in the snow."

In a game of big plays --- did you see the jaw-dropping, one-handed catch by Northwest's Randy Schmidt?---- the Bearcats made more of them and the biggest ones.

One of those was supplied by Young --- an interception in the end zone. It was arguably THE biggest play of the game, because it kept the game scoreless in the second quarter. In a game like this, when points are treasured like gold, the first score can often be the difference. Playing from behind is not advised.

North Alabama had moved it 69 yards in eight plays --- it turned out to be their best drive of the game --- and faced 2nd-and-goal from the 5.

"We were in cover 4 and my man stayed in as an extra person to help block," Young said. "So my eyes went to my corners and wide receivers to help with them. I saw the quarterback, and he was just starting at him and staring at him (the potential receiver). I was pretty sure he didn't see me; I was kind of keeping my distance, trying to bait him (the quarterback) into it.

"Once I saw his arm go back, I just jumped in front of it and was able to catch it. I was just happy to be able to make a big play for the team, because I knew we were backed up right there. Somebody need to step up and make a play, and I was blessed enough to be the one to do it."

The interception was Young's team-high seventh of the season and 13th of his career. He returned one of those for a touchdown last season and thought briefly about running it out of the end zone this time, but thought better of it --- with help from his friends.

"I had seven people come up to me after it and say: 'Jack, we saw that look in your eyes, we knew what you wanted to do,'" Young said with a laugh.  "My best friend plays linebacker, No. 4 (Jarrod Bishop), he actually almost tackled me, because he said as soon as I intercepted the ball, he saw my eyes lighting up. I vividly remember hearing him say: 'Jack! No, no, no, no! Get down, get down, get down!'

That interception and this win put an exclamation point on the football career of Jack Young, one that started by playing in the snow with the his neighborhood friends, then graduated to West School, Thomas Jefferson, the Jays, and finally Northwest Missouri State.

"I definitely soaked it in before and after the game," Young said "I stepped aside and tried to take it all in ... but it still hasn't hit me that I'll never put on pads and a helmet again.

"All the memories and friends I've made up here, I'm just so happy God put me in this position, was able to lead me and guide me to this university ... there's literally no where else in the country I'd rather be.

"It's definitely something I'll remember forever."