There are certainly other viable candidates for the final spot on our Mount Rushmore of Information, guys like Dick Preston, Kermit Miller, Jim Riek, and the recently retired Lee Gordon. Then you have the information man himself, Bob Watson, who's pulled off the trifecta by working for local radio, TV and now the newspaper.

But nobody was quite like our friend Warren Krech.

"A lot of my listeners are friends, I've had a chance to make a lot of friends over the past 32 years on the air," he said.  "I see them all the time, at the grocery store, the hardware store or wherever.

"I've literally approached every show like I'm talking to my friends. If they are strangers, I try to make friends with them."

"It's the personal relationships you make with people. If you actually go to the barbecue, or if you go to the concert or the play, and you talk to the people and get a feel for what they're doing and they're passionate about, then you try to bring that out on the air.

They certainly were and they certainly did --- Krech dominated the ratings in his time slot. But he's hardly pounding his chest with pride.

"That's what's humbling about radio, all the people who aren't listening to you, because there are thousands of choices on the dial. I never claimed to be anything but one of those thousands of voices."

Since his retirement announcement in late March, Krech has been bombarded with an outpouring of well wishes and even proclamations --- Friday was Warren Krech Day in Jefferson City, no less.

"It's humbling and actually kind of embarrassing," he said. "It's been very humbling to get this kind of over-the-top praise and attention. Seriously, if I'd known I was this good, I would have stayed on."

He was that good.

KRECH WAS BORN IN SOUTH DAKOTA before moving to Minneapolis at age 9. He lived there through his high school years before "joining" the Army after the 1969 military draft lottery, which randomly selected recruits based on their birthdays.

You had a 1 in 366 shot of being selected first in the draft.

"I'd been at theater practice and when I got home, my mom said, 'You were drafted second.' I couldn't believe it

"My grades were not as good as they should have been, so I just figured, 'I might as well just go,' and I joined up." I was never reluctant to go."

It's lucky for him --- and lucky for all of us, as it turned out --- that Krech avoided Vietnam and was sent to an Army post in Ethiopia, where he first started working in radio.

"I had never really given radio a second thought, I wanted to be an actor," he said. "But the Army didn't know what to do with me, so they put me in the entertainment branch.

"It was a small post for the Army Security Agency ... I was just one of the support guys for that mission, they didn't tell me any secrets."

After his two-year Army stint, he earned his degree in theater from the University of Minnesota.

"At that time, I was getting serious with my wife-to-be and was thinking about full time work, instead of auditioning for acting jobs and maybe getting the part. And if you did get the part, you worked for six weeks for 140 bucks a week, so I needed something more steady.

After eight years in Minnesota, Krech came to Jefferson City in 1984 --- he's still active in local theater --- and was a disc jockey for the morning show, before getting into the news/talk part of it in 1999.

"You know, the older you get as a disc jockey, the tougher it is to relate to 16 year-olds, at least it was for me," he said. "It was time for a grown-up kind of format."

KRECH DID ROUGHLY 10,000 SHOWS in his career, some good, some maybe not so good. But some were great, memorable and unforgettable.

He interviewed boatloads of celebrities, but that was never his thing.

"Interviewing celebrities is cool," he said, "but to me, it's more about the regular people and the people in Jefferson City. You can get the interviews with the big stars on Entertainment Tonight or ESPN."

Some of the most interesting interviews he had were with FBI agent Joe Pistone, who's the real-life Donnie Brasco --- the undercover agent who infiltrated the Bonanno crime family in the late 1970s; football coaching legend Lou Holtz, who was a recent guest; and former major league pitcher and Central Missouri's own Tom Henke, who was his favorite celebrity of all.

There were other "stars" he loved to visit with, the ones who are the real heroes.

"Interviewing veterans, especially World War II veterans, that was a real privilege getting to know those guys," Krech said. "Those are the interviews I really remember."

"That was a very busy, confusing day at the radio station, with a lot of moving parts," he said. "We were no different than anybody else in the media, trying to figure out just what the heck was going on and trying to get some local reaction to a what was obviously a huge national story."

Then there was the amazing story of James Keown.

"I hired him when he was 15 years-old," Krech said. "He came in and this kid was fantastic, the best part-timer I ever had."

Keown went to William Jewell college in Liberty where he worked in radio, before moving up the ladder with radio stops in Chicago and Boston. But after his wife died suddenly and unexpectedly in 2004, he returned to Jefferson City.

"After (Keown's wife) Julie died, he came back, got in touch with me and said he was looking for a job," Krech said. "I said, 'What? You're way beyond this.' He said he wanted to get his life back together and get back home.

"So I said sure, I whole-heartedly recommended him and got him in, and he took over a talk show and did a really good job."

"One day, U.S. Marshals showed up and arrested him on the spot. I mean, they arrested him in the hallway ... a guy with a Boston accent said: 'James Keown, you're under arrest for first degree murder.'

"It was just surreal. To say the least, I was shocked."

"Dean said, 'James has been called away on unexpected business,' while I was trying to figure out what was going on. It sure was the most interesting morning I've ever had."

Keown was convicted of first-degree murder in 2008 for poisoning his wife with antifreeze, and received a life sentence without the possibility of parole. During his sentencing, the judge said to Keown: I am truly in the presence of an evil person.

"Honestly, " Krech said, "it still bothers me that I wasn't a better judge of character and that I didn't see that in him. He was my guy, I thought he was just a great kid."

THE MORNING STAPLE FOR KWOS AND KRECH was Open Air, a show he hosted with another veteran radio stalwart we call a friend, John Marsh.

"I have nothing but respect for him," Krech said of Marsh, 60. "Hopefully, he won't be far behind me, but who knows? He might just stay at it forever."

There's another staple of radio that Krech never worked with --- the delay button.

"I always worked without a safety net, you push the button (to take a call) and you don't know who's there," he said. "I never had a producer, I never had a call screener, whoever called up, that's what we talked about.

"I absolutely love that format. You get to talk about Jefferson City and you get to know what makes people tick. I'm very interested in other people, they're a lot more interesting than I am."

Krech plans on spending a lot more time with his wife, Marcia, and their grandchildren --- "The biggest reason I wanted to retire is my grandchildren, because that's what it's all about." --- doing more work in local theater, and spending more time at the 160-acre farm he shares with his brother in southeast South Dakota.

"I love to get up, drink coffee and go to the Runge Center and walk. I always told people, 'The first 30 years (of getting up that early) are the hardest. After that, it was pretty easy.'"

"Good things come to an end," he said, "and this is one of those things. The interaction with the people in the community and at the radio station, for that matter, I'll miss that a lot. I enjoyed at least making an attempt to make a positive contribution to the community."

Rest assured, Warren, you succeeded. That will be your legacy.

And it's a legacy as solid as Mount Rushmore. 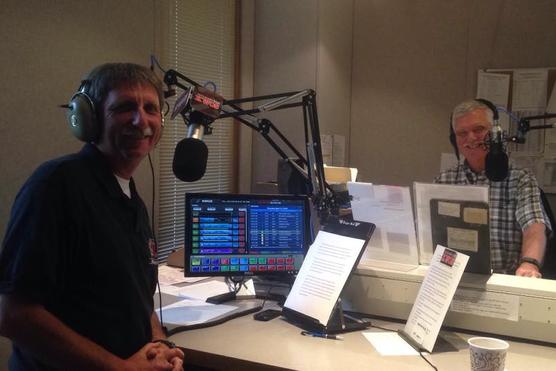 Thanks for the memories:

The legacy of Warren Krech

Warren Krech (right) and John Marsh mug for the camera during one of the duo's final shows in the KWOS studios.

JEFFERSON CITY, Mo. --- We've sure been lucky around here.

More than lucky, really, we've been blessed. Maybe even spoiled.

We've gotten to know these people so well, they've become our friends --- even though you may have never met them.

They're like a pair of old shoes, comfortable and reliable.

* Warren Krech, THE voice of Central Missouri --- period --- for more than 30 years. Wake up with Warren, Coffee with Krech, call it what you will --- he was there for us every morning as we got ready for work, fixed breakfast, or drove the kids to school.

Like Smith, Krech, too, is everywhere. He just won't be behind the microphone at KWOS anymore, as Friday morning was his final broadcast, ending his 42-year run in the business, the last 32 in Jefferson City.

"People said I had a talk show, but I always looked at it like, 'I have a listening show,'" Krech said. "Your biggest job on the radio when you're interviewing people is to really listen to them ... I don't write down a lot of questions, I listen to what they say and kind of go down the path they lead me on.

"It's interesting to figure out what that path will be."

Despite of his less than glamorous hours --- he got up at 3 a.m., arrived at work at 4, did a couple of weather forecasts around 5, then "really started rocking and rolling at 6 --- Krech, 66, was always on top of his game.

He never seemed tired or disinterested, he was as fresh as a Missouri morning. Every morning.

Try being that guy.

"My background is in theater and every performance has to be brand new," he said. "Whatever you did yesterday simply doesn't matter, it's gone. There's no record or memory of it, you just have to start fresh.

"Plus, there's a reason we call it work. Nobody really cares how you feel or what kind of mood you're in, you have a job to do." 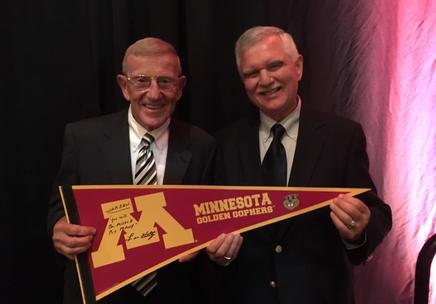