ASHLAND, Mo. --- When your team goes from lousy to really good, they say you go from the hunter to the hunted.

Well, not too long ago, the Southern Boone girls basketball team wasn't even in the field.

And if they were, they were out there hunting without a gun. Or a bow. Heck, they didn't have a rock to throw.

But oh my, how times have changed.

Last season, 29-3 and the Final Four. This season, 5-0 and ranked second in the state. So much for being the hunter and trying to sneak up on somebody.

"We're very talented and we obviously understand that there's a target on our back," Lady Eagles coach Tony Phillips said. "There are going to be a lot of games when we walk into the gym and we're better than the other team, and that's why we have to compete against what our best is, not who we're playing. That's what our focus has to be.

"Plus, we're just focused on today, that's the good thing about these girls. They don't know who we play next week or in two weeks or three weeks, they're just worried about today."

This renaissance started under Shannon Jeffrey, who led the Lady Eagles to a 17-win season in 2013-14, just one year removed from 0-22. The next year, the Lady Eagles won 18 games, the school's first district championship in 14 years, and a trip to the quarterfinals.

Then came last year, when the Lady Eagles took it to the next level --- again.

"We made history," said Phillips, who's an eye-popping 34-3 two years at the helm. "I learned to be uncommon, you just have to outwork people. I've heard coach (Pete) Adkins say that to so many people --- you have to practice better than the other teams in the state every single day, and I think we did that.

"We're doing a good job of that this year, too. It's really about your practice habits."

Phillips dropped the name of Pete Adkins several times during our conversation. Why? Phillips' wife, Stacy, is the granddaughter of the late, great Herb Gordon, who was best friends with Pete for decades.

"I've heard more Pete stories since I've been with Stacy ... gosh, 12 years now," Phillips said. "That's how I got to know coach Adkins, Stacy's kind of his adopted daughter."

If you're a coach, there's nobody better to know than Pete Adkins. Then there's Rod Haley, who built a basketball and baseball dynasty in the 1980's and 90's at New Bloomfield --- and where Phillips had the privilege of playing for Haley.

Talk about learning from the best.

"You don't have the kind of success they had, year-in and year-out, without having that foundation in place and without having the work ethic," Phillips said. "Jay football, they were better at the fundamentals than everybody else, and it was the same thing with New Bloomfield basketball and baseball.

"I came can remember thinking on the baseball side: 'Why are we playing pepper every single day?' Well, I can tell you that in three of the state titles I was a part of, we won it when a guy had two strikes and played pepper with the ball and knocked it through the infield. That's why you play pepper every day.

"Back in those days, it was Jay football, New Bloomfield baseball and basketball, and Helias wrestling (and coach Mike Jeffries). If you look at those three, the foundation of their success, it wasn't hard to figure you what it was --- hard work and determination can take you a long way."

Talent doesn't hurt, either, and the Lady Eagles have plenty of it. Especially in their nine-player senior class, which is a whopping number at any level.

"They're extremely talented and they work hard," Phillips said. "We've put them in some situations that they weren't in early in their careers, and I think they've embraced that.

"We don't coach girls, we coach athletes. That's the way the girls at Southern Boone want to be coached."

Well, some need more --- or in the case of Kylie Shoot, less --- coaching than others.

"If I told you I coached her a lot," Phillips said, "I'd be lying to you. Her basketball IQ is really, really high; she really is a special player."

"When somebody's hot like she was," Phillips said, "our girls do great job of making absolutely sure they find her."

While Shoot averaged 13.6 points last season, the team's leading scorer was Skyler Beeson, who was at 14.3 ppg. Beeson is now a 5-11 senior and she remains a matchup nightmare.

Senior Faryn Griffin (5-2) is "a coach on the floor," Phillips said, while 5-9 senior Megan Barnett, who moved in from Maryland, is the team's fifth starter.

The remaining seniors are 5-6 Riley Scheer, who's finally healthy after battling back injuries the last three years; 5-9 Brooke Trammel, the strongest player on the team and one of the first players off the bench, along with Scheer; 5-10 Kailey Goodrich;  and 5-10 Isabelle Smith, who missed last season with a torn ACL.

There's been plenty of playing time to go around in the early going, as Southern Boone has won its first five games by a combined --- get this --- 225 points. Five games. That's a silly average of 46.2 ppg. heading into Tuesday night's home game against California, before the Lady Eagles go on a 16-day break, which is also somewhat silly.

The Lady Eagles feel like they have some "unfinished business" after last season, which ended with a pair of losses in the Final Four. Philips then offered this, which is both very sad and, once again, silly in its own right:

"Quite honestly," he said, "I feel like I failed my girls last year in the Final Four. My grandma went to the hospital the night of the Final Four and she never came home."

If Phillips was distracted, you can certainly understand. He continued.

"I'm personally motivated this year to coach to the best of my ability every single game," he said. "Because if I can coach to the level of my players, we're going to have a great year."

The Southern Boone Lady Eagles show off their trophy after winning the district championship last season, which would lead to the their trip to the Class 3 Final Four. 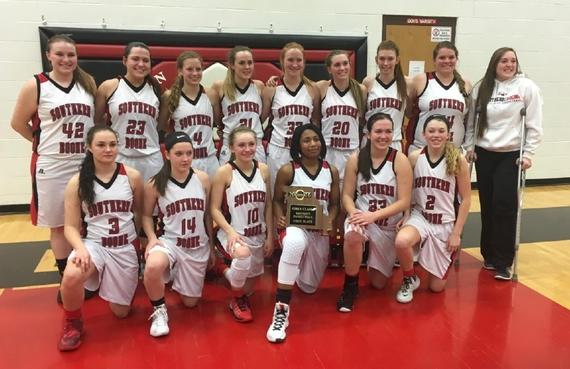