JEFFERSON CITY, Mo. --- It's the most wonderful time of the year, a time when we're treated to more than just Aunt Sally's fudge.

Basketball, a lot of it.

Wednesday was the annual kickoff event for our Central Missouri Sports Holiday Season, as participating players and coaches gathered at Joe Machens Capital City Ford/Lincoln to promote the 31 games that will start Saturday, Dec. 17, with the Capital City Shootout (boys and girls games) and conclude with the championship games of the Machens Great 8 Classic (boys) and State Farm Holiday Hoops Invitational (girls) on Friday, Dec. 30.

"So if you're looking for something to do during the holiday season, it's the best ticket in town."

Rest assured, teams don't just show up and play games, there's a lot of planning that goes into this venture. The events receive great support from the community and the numerous sponsors, including KRCG.

"The emphasis is on good basketball teams and good basketball players," Thompson said, "but everything surrounding it --- like the sponsors coming together and making it happen, to the committee members and administrators --- is first-class all the way.

"It's been this way for a long time and a lot of effort goes into keeping it this way."

Helias Lady Crusaders coach Alan Lepper knows as much, even though he's in his first year at the helm.

"This thing is so well run," said Lepper, whose school is the host for the State Farm Invitational at Rackers Fieldhouse. "The amount of time these people put in, it's just unbelievable."

Unbelievable ... which is also the amount of basketball you can watch. Based on games lasting 80 minutes, there will be more than 41 hours of action during these two weeks.

Just thinking about it is enough to make you sweat.

"When you get teams like this, it's just fun to watch and be a part of it," Lepper said. "I'll learn a lot just sitting back and watching other teams and other coaches."

The Lady Crusaders' game with Incarnate Word tipped off at 4 a.m. as a part of 48 straight hours of basketball.

Would Lepper like to do that again? Here's the one-word answer.

Then he added: "But if it came down to it and we needed the game, I'd do it again. But hopefully, we won't have to."

The Great 8 will have a significant void this year --- there will be no 6-9 senior Michael Porter or 6-10 junior Jontay Porter. Father Tolton, which is the defending tournament champ, is back in the field, but their two superstars --- who are not part of the normal high school basketball species --- have moved to the state of Washington.

The Machens was also blessed to showcase the talents of 2015 Jefferson City graduate O.G. Anunoby, who's taken his jaw-dropping talents to Indiana, where he's made appearances on ESPN's Top 10 and is considered one of the top sophomores in the nation.

"I like watching players like that, don't get me wrong," Thompson said. "But I really enjoy watching teams come in here who execute and play together, and don't just rely on one or two players. I think you're going to see a lot of that, teams doing what they do really well, and a lot of contrasting styles and matchups that will be interesting."

The Jays hope to make it interesting for the hometown fans ... for a change. Jefferson City has struggled mightily in its own tournament in recent years, especially in the first round when they've consistently been knocked into the loser's bracket.

"We're still waiting to make a good run," Thompson said. "It would be real nice for us to get through that first round and go from there. That's our goal right now, because that's been an uphill battle." 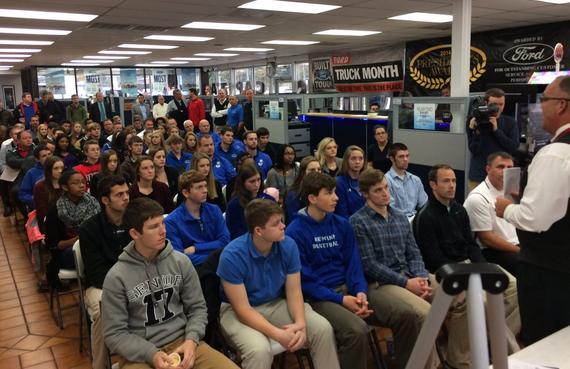