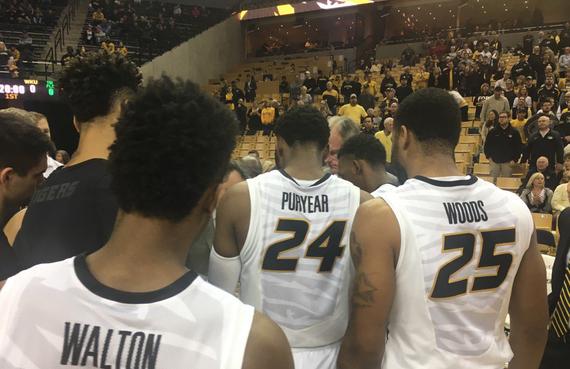 It's not a good sign when Tigers
struggle vs. hapless Hilltoppers

COLUMBIA, Mo. --- It was not the most interesting game in the world.

The affair was less inspiring than a bowl of cottage cheese or a Sunday afternoon nap. Mine was great, thanks, yours?

The nap, not the cottage cheese.

"Not pretty by any means," Missouri coach Kim Anderson surmised after Saturday's game.

And won, a "not pretty" 59-56 decision at Mizzou Arena in a game that made a yawn look exciting.

We can say this --- while the crowd was depressingly small (announced at 4,547), at least they were quiet, too. Politely quiet.

Empty libraries have been louder.

This bunch is really, really lousy. Their best player is a guy that sounds like he walked straight off the set of Revenge of the Nerds --- Pancake Thomas.

No relation to Booger.

The hapless Hilltoppers had lost their previous three games by a combined 68 points; they did beat some team named Campbellsville by nine in an exhibition game. It's not like they suddenly solved the riddle and found the magic touch Saturday because at best, they looked disinterested.

And when the lead grew to 52-42 on a Frankie Hughes dunk with 12:01 left, it appeared Mizzou could run away and hide.

Instead, the Tigers stood there and waited , chins out, for the Hilltoppers to hit them square in the jaw and run away with it. But nothing doing --- the Hilltoppers finished with fewer points than the school's football team scored Saturday.

Obviously, the end is near.

"Coming off Monday night's game," Anderson said, "I think our confidence was shook a little bit."

At least this time, the Tigers found a way to win.

"We always talk about when you're struggling offensively," Anderson said, "you can always play defense and rebound. We did that, at least. It's unacceptable to go 14 possessions (it was actually 11), I think it was, without scoring. That's probably some kind of record."

Anderson even reverted to drawing up plays in the dirt.

Missouri won this one by outrebounding the losers 44-30 and holding a 14-2 edge in second-chance points. Without those numbers, this would have been another devastatingly-disappointing and depressing loss.

But this team is young, right? Of course it is, but you can't use that as a reason year after year after year. At some point, the reason becomes an excuse that simply points to deeper problems and more troubling issues.

You have to feel for Mizzou fans, for this looks to be the fifth straight season of bad teams in the two biggest sports --- three in men's basketball, two in football. Another season of hoping for the best, but expecting the worst.

But this basketball season can't get any worse, right? It's early, it will get better, right?

This season's early effort against highly-touted Xavier was obviously fool's gold, nothing more than a mirage. We've had those in recent years, too, the rare occasion when the Tigers played a good team close --- and ended up 9-23.

It was what it was and it is what it is.