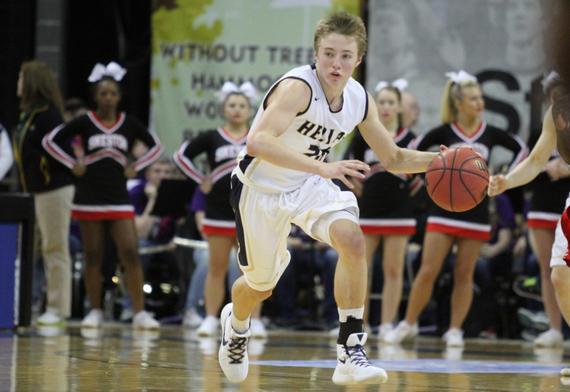 Junior guard Landon Harrison returns this season after averaging 16 points and four assists as a sophomore for the Crusaders.

JEFFERSON CITY, Mo. --- The ultimate goals for every boys basketball team are always the same:

* Dating the prettiest girls in school.

Most aren't very realistic. The order of unrealistic depends on who you ask ... especially the prettiest girls in school.

What the Helias Crusaders have done in eight years under Josh Buffington has been a sight to behold, however, including six district championships are three trips to the Final Four, two of those coming in the last three years.

Even though the biggest prize has been elusive, that leaves most schools drooling with envy.

Repeating those feats this year will be difficult, indeed, as the Crusaders lost the seven-man senior core of that team to graduation --- including always-there and always-reliable guys like Sam Husting, Trevor Koelling and Adam Bax.

"We obviously lost a great amount of leadership and a very solid senior class," Buffington said. "We had a great team that was truly a team. It was a special group and there were several reasons they were special. They were all gym rats, they always wanted to maximize their potential outside of our two-hour practice slots and that was a great message to send to our younger guys. They were a coachable group and they had great chemistry, both on and off the court.

"That's tough to follow, from the standpoint that you're following a Final Four team that was very successful. But it's easy to follow that group because they were such great leaders, and really took those young guys we have this year under their wing last year."

It might be hard to believe, but this will be Buffington's 16th year coaching, the last nine as head coach of the Crusaders. How has he changed?

"I'd like to say I'm more mature," he said with a smile, "but our coaching staff would probably disagree with that."

Regardless of that, he's certainly learned to change with the flow.

"In any sport, but especially in basketball, you have to adapt every year --- not only to the kids, but to a different set of parents and sometimes, a different administration," said Buffington, who notched his 200th career win last season.

"From a basketball standpoint, we as high school coaches have to adapt to our personnel and our strengths and weaknesses. Defensively, you can keep a lot of the same philosophies, but offensively, I've had to change schemes and strategies quite a bit. Sometimes, you really have to wipe the slate clean and totally change how your playing offensively.

"The best part of being a high school basketball coach is player development and getting the most out of them. You go with what you're given and you go with your strengths."

This year's team won't be as big, but it will showcase more speed ... a lot more speed.

"It's going to be a different style than Helias basketball fans are used to watching," Buffington said. "We don't have the size we've had in the past to where we can pound it in, non stop. But we have a lot of speed, we have a lot of quickness and we have some tough kids."

They come no tougher than 5-10 junior guard Landon Harrison, who was a huge force on last year's senior-dominated team --- and he did it as a sophomore.

"I've known Landon since he was in third grade," Buffington said. "A lot of kids you see at that age, you think they could be pretty good, but they have a long way to go. When I first saw Landon in third grade,  I said: 'This kid is probably going to have a good chance to play when he's a freshman.'

"He's got the drive, he's got the work ethic, physically he's very gifted --- he's athletic, fast and quick ---  and he's one of the most competitive kids I've ever coached. He's the type of talent that doesn't come around very often."

And the bigger the moment, the better he is.

"He's not scared of the big stage and the big moment. That's when he really gets good. It's a game to him, it's fun, he loves it when fans are in the stands."

Harrison averaged 16 points a game last year --- he was the team's leading scorer in the postseason --- to go along with four assists.

He will be one of two junior cornerstones on this year's squad, joining 6-6, 225-pound Nathan Bax, who averaged eight points and five rebounds as a sophomore.

"He's a very talented athlete, he's very good basketball player, and an unbelievable physical force," Buffington said. "We're really going to have to ride those two, especially early on, because they've been there and done that.

"We feel like Landon's the best point guard in the area and Nathan's the best big guy in the area, I truly believe that. I like our chances going into war with either one of those guys."

The rest of the roster has promise, but it's untested promise. Harrison and Bax will be co-captains along with the only two seniors, 6-2 Drew Boessen and 6-4 Dalton Weaver, who missed all of last season with a broken back suffered in football.

"Obviously, it's a brand new team and right now, you're just trying to establish a new identity," Buffington said. "I'm very confident in this team. There will be a time this season --- probably early in the season --- that we don't get a lot of respect. But we won't let that bother us.

"It may take a little bit of time to jell and learn how to play with some new faces. But we have very coachable kids and I think we have the pieces to be very tough to beat the second part of the season."

Those were certainly big goals checked off the list.

"This is a new team, but some things have to stay the same, and that's chemistry and how hard we play," Buffington said. "These guys are ready for their chance and hopefully, we can plug them right into a system and a tradition that we're very proud of.

"They want their chance to be playing in late March at Mizzou Arena, they want to be those guys running out of the tunnel. Hopefully, we can make that happen."