Odd, in fact, because it was so unexpected.

If you saw this coming, well, you probably saw Donald Trump being elected President of the United States a few years ago, back in the days when he was telling people they were fired on a TV show somebody must have watched, because it was on for so many years.

But on this gray, chilly day, a ray of sunshine broke through. Several rays of sunshine, in fact.

The ugly football duckling became quite an attractive sight, indeed, a beautiful swan in black helmets.

The first half of Friday's game against the Arkansas Razorbacks, fans were treated to more of the same ineptness they'd seen the last three months, the same ineptness that had produced a 3-8 record heading into this game and had dropped the Tigers into a 24-7 halftime deficit.

Finishing the season 3-9 was merely 30 football minutes away, it was a foregone conclusion. Surely, what we'd witnessed the last three months couldn't change that much in 30 minutes. Or could it?

Impossible, most would say, this just couldn't happen. But it did. As we enter this Christmas season, this season of magic and miracles, it certainly did.

The hard-hearted fan, his name was Joe Grinch

He stood with his arms crossed, his fists in a clench

He wears Black and Gold, but no one's sure why

Because he seems to enjoy watching MU fans cry

His pastime is misery, it is what it seems

"Barry Odom," he says in a tone only him, he can hear

Joe Grinch, he knows more than 10 fans together

He knows so much football, he even knows weather

Just ask him, he'll tell you, yet no fan will draw near

Just ask him, he'll tell you, yet the fans they steer clear

"They're finding out now that no victory is coming!"

"They're walking out now, I know just what they'll do!

"Their mouths will hang open a minute or two,

"Then these fans at Faurot will all cry BooHoo!"

"That's a noise," grinned Joe Grinch, "That I simply MUST hear!"

So Joe Grinch then paused, put his hand to his ear.

And he did he some sounds --- coming from the back rows

It started out low and then started to grow.

He stared at the field, Joe Grinch popped his eyes

Then he shook, what he saw was a shocking surprise!

Every fan at Faurot, the tall and the small

Was smiling and hugging --- they had won after all!

He hadn't stopped victory from coming at all!

The Tigers had won it, they'd won it by four

And Joe Grinch was wondering: "All I thought, it's no more?"

And what happened next? At Faurot Field they say

And the minute his heart didn't feel quite so tight,

He went to his car and turned on his bright lights!

Missouri beat Arkansas 28-24, as the Tigers put together what was easily their best half of football in their last half of the season.

Merry Christmas, Mizzou fans, because we've been given the best gift of all. 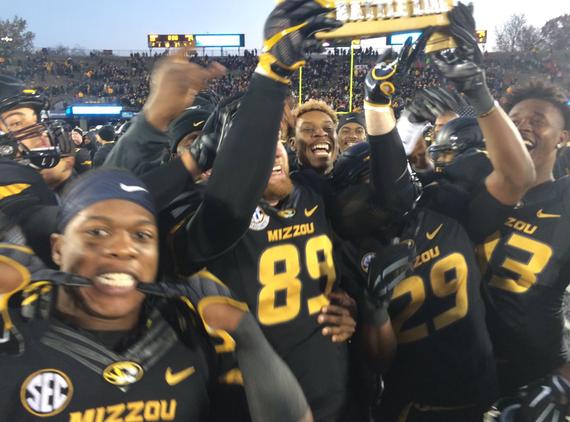