A disappointing finish, but still

another great season for Falcons

WARDSVILLE, Mo. --- It's why you play the game, for games like this.

There's no better feeling to win them, but it's sure lousy when you lose them,

Disappointment is an unavoidable way of life in sports, because ultimately, there will only be one champion. No ribbons for not winning.

And in high school football, every team will lose its last game of the season --- except for one.

Another fabulous football season for the second-ranked Blair Oaks Falcons ended in disappointment Friday night as the fifth-ranked McCluer South-Berkeley Bulldogs came to the Falcon Athletic Complex and left with a 34-10 win in the Class 3 quarterfinals.

It denies the Falcons (11-1) their second straight trip to the semifinals, while the Bulldogs (12-0) have advanced to the school's first Final Four since 1988.

Blair Oaks entered the bout averaging nearly 44 points a game, but couldn't muster a consistent attack against McCluer South. There's reason for that --- they're good.

The Bulldogs have now allowed only 85 points all season.

If you're looking for pivotal moments in a 24-point game, there were two of them --- and both came when the outcome was in the balance, producing a two-touchdown swing.

* Late in the first half --- and with Blair Oaks down 8-3 --- the Falcons put together a 69-yard, 6 1/2 minute drive and had it third-and-goal at the one. The third-down play lost a yard, the fourth-down play didn't gain enough, and Blair Oaks was denied.

That left the deficit 8-3 at the half --- the Falcons taking their only lead on a 30-yard field goal in the first quarter by Ryan Paschal, and the Bulldogs taking the lead for good on a 5-yard run by junior quarterback Tavian Willis midway through the second.

That finished off a massive 15-play, 86-yard drive.

* In the opening minute of the second half, a Blair Oaks fumble led to an 11-yard scoop and score by Antonio Nelson to make it 14-3 --- and the Falcons would get no closer the rest of the night.

It then went from bad to worse for Blair Oaks, as senior Jake Van Ronzelen went down with an injury just 64 seconds into the second half and didn't return.

Not only did that strip the Falcons of their leading rusher --- and now, the school-record holder with 1,732 yards on the season after his 105-yard effort Friday night --- but also an impact player on defense.

After the Bulldogs made it 20-3 on a 52-yard pass from Willis to Dai'Shawn Cotton with 7:32 left in the third, the Falcons put together their final scoring drive of the game ... and the season.

Senior Cody Alexander moved from wide receiver to running back, replacing Van Ronzelen, and carried it six straight times on an 80-yard touchdown march. The big run was a 49-yard gain to the McCluer South 8, before Alexander's 2-yard run made it 20-10.

There seemed to be a comeback in the air --- but it was only the chilly, north breeze. And it only got colder for the hometown fans.

After a first half clean of turnovers, the Falcons turned it over four times after the break. The first led directly to Nelson's touchdown, the other two led to touchdown runs of 1 and 21 yards Tivon Thomas in the opening 42 seconds of the fourth quarter.

Alexander finished with 139 yards rushing, while Nolan Hair was 12-of-30 for 137 yards with two interceptions. The Bulldogs rushed for only 82 yards, but Willis hit several big plays down field and finished 18-of-25 for 272 yards.

The Falcons actually won the yardage battle 379-354, but much like getting the most votes in a national election, sometimes, it's not enough to win the war.

This closes the book on another Blair Oaks football season, this time it ended in the quarterfinals; last year, it was in the semifinals.

But the last two seasons --- and the first two under head coach Terry Walker --- Blair Oaks has gone a sparkling 24-2.

You certainly can't be disappointed in that.

Blair Oaks quarterback Nolan Hair looks for an open receiver during the first half of Friday night's Class 3 quarterfinal game with McCluer South-Berkeley at the Falcon Athletic Complex. 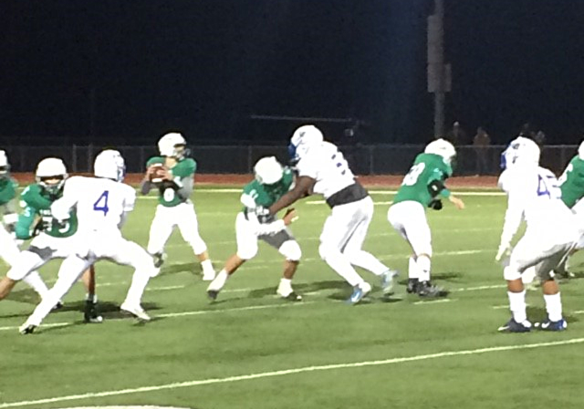 Down to the Elite 8: