Inside the ropes
with Andy North
and Scott Hovis

New course will be a special place

for some very special people

JEFFERSON CITY, Mo. --- Call this a great venture for an even better cause.

This, indeed, is something special ... a special place for some very special people.

The Ken Lanning Golf Center --- designed specifically for children, individuals with disabilities, and veterans --- will debut at 11 a.m. Saturday at Turkey Creek.

This is the first day for the first-of-its-kind facility.

"This golf course is going to touch a lot of lives," said Scott Hovis, executive director of the Missouri Golf Association (MGA). "It's going to give people the opportunity to play golf who've never had the opportunity before.

"It's a chance for them to learn a life sport and it's something families can go out and enjoy, as well."

The nine-hole, par 3 course is handicapped-accessible with ramps, where needed, for easy entrance to tees and greens. There are cart paths around the entire course for both carts and wheelchairs, and will be free of charge to those who qualify.

It will measure 833 yards from the "back" tees, with holes ranging from 77 to 137 yards. The course's tees and greens are Field Turf, the same turf used on most football fields these days. But instead of long grass with a rubber base, like you see at Faurot Field, this will be short grass with a sand base.

"They play exactly like greens, they're amazing," Hovis said. "It will take a shot coming in and stop, they're very receptive. A good, quality shot will even have backspin."

Groundbreaking was last June and the course was scheduled to open last fall, but was delayed. "We just felt like we needed to let it mature and settle and get everything situated so that's we'd be 100 percent ready to go this spring," Hovis said . "We just didn't want to rush it."

The original nine at Turkey Creek has lights, but there are no lights planned for this nine, at least for now. The course wasn't just haphazardly thrown together and sketched on a napkin during Happy Hour, it was designed by golf course architect Todd Clark out of Kansas City.

They're doing it right and they've received some help. The Missouri National Guard bulldozed and moved some of the dirt to design Clark's layout --- at no cost, other than gas and some other minor expenses --- saving nearly $250,000 of the total cost of $1.25 million.

"It gave them the training they needed" Hovis said, "and it certainly saved us a lot of money, as opposed to having a contractor come in and do it all for us."

When not being used for tournaments or other special events, the new nine --- which is located on the northeast portion of the property --- will be open to the public and have a "minimal" fee to play.

"This is something I've been wanting to do for a long time, five or six years," Hovis said. "I think it's a perfect fit to what Turkey Creek already has."

Lanning was a significant player on the Missouri golf scene for decades. He was a member of the MGA Board of Directors for 31 years, and his impact on junior golf in the state was second to none. The Rolla native passed away in 2014 at the age of 90.

"He was Mr. Junior Golf in Missouri; he's the reason junior golf is where it is today," Hovis said. "He was just an amazing man who had a big heart ... he taught a lot of us how to play."

The Lanning Golfer Center will be owned by the Missouri Junior Golf Foundation, which is part of the MGA. They've agreed on a 99-year lease with Turkey Creek owner, Dan Baumgartner.

"Without having Danny let us move our offices out there in the first place," Hovis said, "then with him seeing how great this is going to be down the road, we couldn't have done it without him."

Indeed, Baumgartner deserves a big shout-out in this venture. Cost of the lease? $1 a year.

To be sure, this should be an economic boon for Jefferson City and the surrounding area. Because of the unique nature of this handicapped-accessible layout, state events --- like the Missouri Special Olympics and Wounded Warrior tournaments --- have already signed up.
It could very well draw national interest, as well.

"There's no loser in this deal," Baumgartner said. "The City of Jefferson wins, because it's going to bring a traffic flow we haven't had this way before. People will be staying in hotels, eating at restaurants, it's great for the kids ... it's going to build golf.

"Then when you look at those people who are disabled, it's going to give them another chance in life to go out and play a sport and be competitive and have a lot of fun. I mean, how can you go wrong?"

You can't. This is a win-win-win for everyone, especially those folks who need --- and deserve --- it most. But they could certainly use your help, as the price tag is a hefty one. To make your tax-deductible donation, please go to mogolf.org and see how.

"We have not seen a negative with this project, only positives," Hovis said. "We'd love to have people make donations to help us, it's such a great cause. We just want people to learn about what we're doing ... we want to get the word out about how good this is. And I think that's starting to happen."

An overhead view of a portion of the Lanning Golf Center at Turkey Creek, which will have its grand opening Saturday. 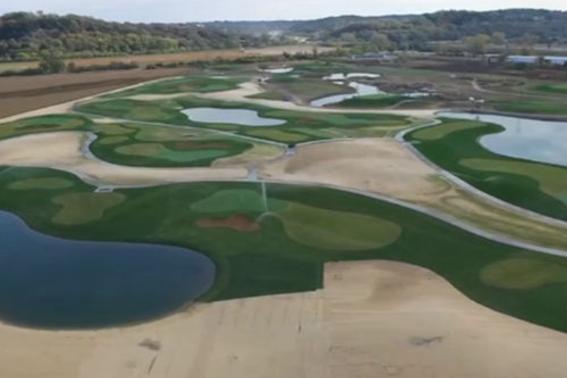