Southern Boone's Clay Jeffrey (2) moves in for the tackle on Blair Oaks running back Jake Van Ronzelen during the game Sept. 23 in Ashland. Van Ronzelen rushed for 236 yards and a touchdown in the Falcons' 42-13 win over the Eagles, and the teams will meet again Friday night in Wardsville --- this time for the district championship.

ASHLAND, Mo. --- YOU COULD SAY Trent Tracy's timing was perfect.

Or even that he was lucky.

He arrived at Southern Boone, after all, just as a new state-of-the-art weight training facility was opening.

In case you hadn't heard, bigger, stronger and faster are fairly important in sports.

But in reality, Southern Boone is the lucky one. Having a new weight room is one thing, having it make a difference is another. He doesn't like to admit it, but Tracy has made a difference.

Maybe even the difference ... and not just in football.

"I'm not a big toot-my-horn kind of guy, I'm just not," Southern Boone head football coach Tracy said. "I do things for kids, that why I do this.

"But I'm lucky enough to have gotten the head coaches of other sports at our school to buy into the weight room, and I work these kids out all summer long. We have a girls session, a boys session, then a middle school session. And then they're all in my weight training classes, so these kids are getting year-round training. I think it all starts there.

"All these kids who have made the commitment to the weight room are seeing the results. That's only happened because the coaches put enough faith in me and what I wanted to do with our athletic program."

Sports at Southern Boone are booming and prospering, basically across the board --- including football. What Tracy has done in his three years with this program has nothing to do with luck.

"The first year, we won a playoff game and went 4-7," he said. "So that was a success, it's all about small successes. 4-7 is nothing to brag about and we certainly don't settle for that, but the two years before that they'd won three games, total."

After Tracy's 4-7 debut, the Eagles went to 6-5 in his second season and beat California for the first time. Now this --- a school-record nine wins as Southern Boone (9-2) heads into the Class 3 District 6 championship at second-ranked Blair Oaks (10-0) at 7 p.m. Friday.

"This is the culmination of a few things, Tracy said. "It's my third year here, so these guys have basically bought into the program, the system, and the things we wanted to change. We try to challenge the group every year to take it a step further, and I think we've done that each year.

"And again, I think these kids are seeing the results in the weight room ...that has helped us be competitive in the conference with these teams, and maybe even pass a few up. As far as our strength and physicality and speed, they've really improved the last three years."

TRACY, 32, IS A 2002 GRADUATE of Francis Howell Central in St. Charles, where he played football for four years. It's also where he found his calling.
"I knew from when I was a junior in high school," he said, "that I wanted to be a teacher and a coach."

Tracy played football for two years at Lindenwood, then had assistant coaching positions at Howell Central, Duchesne and Moberly (for seven years), before the job at Southern Boone came open.

"I loved Moberly and learned a ton about teaching and coaching up there," Tracy said. "But I thought it was about time I wanted to pursue a head coaching job. I don't know if I'd ever actually been in Ashland before my interview, but I saw there was a lot of potential here."

Potential has turned into results --- and a huge upswing in interest. The football team's numbers have increased dramatically since Tracy arrived, from 35-40 players his first season to 56 this season.

"Those kids who were sitting out before want to be a part of the good stuff that's going on," Tracy said. "I'm big on relationships with these kids; I don't shun kids who aren't football players. One of my goals has been to get some kids back out for football that had maybe given it up before I got here.

"We've gained some pretty good athletes the past two years. Success can breed success, I'm a firm believer in that."

Against some sizable odds, the football Eagles are having success at the same time, in the same season, as the boys soccer program, which continues to prosper.

"I'm a huge advocate for multi-sport athletes," he said.

Tracy backs up his words --- he's starting a wrestling program Southern Boone, so his days are full of double-duty practices.

SENIOR QUARTERBACK SPENCER TAGGART drives the bus for the Eagles. Taggart played football in middle school, then switched to soccer, before coming back to football prior to his junior year.

"He saw what we were doing," Tracy said, "and most of his buddies played football, so he decided to switch. When we got him, we knew we had a good athlete."

In his first full season, Taggart has completed 120-of-242 attempts for 1,736 yards and 22 touchdowns, compared to only seven interceptions --- and four of those picks came in one game, a 32-17 loss to Osage.

And he's only a sophomore.

"Sam's No. 1 attributes are that he's tremendously competitive and tremendously smart," Tracy said. "He has an instinct that most kids his age just don't have."

Senior linebacker Cole Morris leads the team in tackles (90), Smith has totaled 17 tackles for loss, while senior Colton Schupp is second on the team with six interceptions.

Southern Boone has been quite adept at forcing turnovers this season --- 19 interceptions and 16 fumble recoveries. They won the turnover battle, which is always a key, in the regular-season meeting with Blair Oaks, but still lost handily, 42-13.

No shame there, however. This just in --- the Falcons are pretty good.

"They have such great tradition," Tracy said. "The kids who are playing football now, all they've seen is Blair Oaks being successful. I think it starts there. And their kids have been in the big games, they find ways to win and they know how to win, and they deal with adversity so well.

"Even when they're down two scores, they don't hang their heads, they find a way to fight back. That's awesome --- in today's society, a lot of kids can't find that inside themselves. It starts there."

Tracy almost sounds like a fan of Blair Oaks, doesn't he? Well, there's no almost about it --- he is a fan of what they're doing in Wardsville.

"They're very well coached, they're able to adjust on the fly," Tracy said. "They just play with great intensity and effort. I think they have tremendous pride in the name that's on the front of their jerseys.

"They graduated a lot of talented kids last year, and a lot of people outside their program thought they were going to have a down year. But all they did is reload. Different names, but they look like the same players --- it's like they have a cookie-cutter mold down there. It's something a lot of people would love to have.

"But the biggest thing is their speed; speed kills in this game. Their speed is something you can't mimic, you can't create a scout team within your own team when you're trying to practice for them. All their kids, including their linemen up front, all have speed and physicality, and they pride themselves on that.

"If you lined our weight room numbers with theirs, I would imagine we're very competitive, we may even better in some areas. But you can't replace speed --- and they have it."

THE EAGLES HAVE BEEN in this position before --- in this calendar year, in fact, just in a different sport. Their boys basketball team was good, very good, but they had the (dis)pleasure of meeting Father Tolton in the district championship game.

That task was basically impossible. This task, while improbable, is not.

"Most of the basketball team plays football, too," Tracy said, "and we've talked about that. Sometimes you face the best teams in the state earlier on than you'd like. Our guys know all about that. Sometimes, it's just luck of the draw. There's nothing you can do about, you just have to play the game."

Tolton's Michael and Jontay Porter, who have since moved to Seattle, are destined to be future college stars --- and will likely end up in the NBA.

As good as Blair Oaks is --- and perhaps this is a crude comparison --- but the Falcons don't have Tom Brady and Rob Gronkowski.

"I totally understand what you're saying," Tracy said. "But they do have a very, very good Class 3 football team."

Tracy and the Eagles, however, are relishing this chance. And why not?

"It's not going to be easy, by any means," he said. "(Our players) know what's ahead of them, they know they're playing a great team and there's no need to sugarcoat it --- it's going to be a challenge for us.

"But it's not very often you get a second chance at a team. Like I tell our boys: 'We've gotten over a lot of humps in the three years they've been a part of the program.'

"And there would be no bigger hump to get over than beating Blair Oaks." 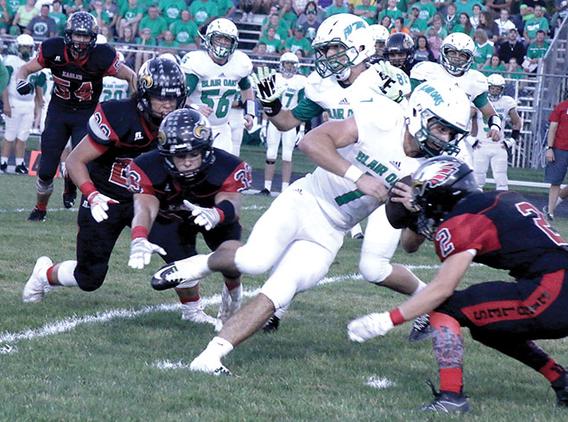 Eagles are flying high under Tracy,

but face tough task against Falcons