Battle beat Raytown 44-13 last week --- although the Spartans trailed 13-12 at the half --- while Belton got past Smith-Cotton 28-17. ... The Battle-Raytown game ended with an ugly brawl, which resulted in the ejection of Spartans' senior lineman Wyatt Smith. Because of MSHSAA rules, Smith is also suspended for this game. ... Battle senior quarterback Brevinn Tyler has rushed for 1,236 yards and 21 touchdowns this season, while throwing for 2,093 yards and 22 scores. That's 3,329 yards of total offense and 43 touchdowns, an average of 332.9 yards and more than scores per game. ... The Pirates have won eight of nine since opening the season 0-2. The only loss during that stretch was to the top-ranked team in Class 4, Kearney, 23-21. Kearney has outscored its first two district opponents 114-7. ... Battle --- which is seeking its second state championship in three years --- is averaging 48 ppg. and allowing 22. Belton's averages are 30 and 17 ... The winner of this game will play either eighth-ranked Carthage (9-1) or unranked Nixa (6-4) in the quarterfinals on Saturday, Nov. 12, at 1 p.m.

This has basically turned into Groundhog Day for the Crusaders --- they're going to keep doing this until they get it right. This is their fourth trip to Hannibal in the last 14 months, and the Pirates have won the first three, including a 19-14 decision in the season opener. Not only was the final score close, so were the total yards --- second-ranked Hannibal held a slender 266-247 advantage. ... Talented, explosive senior running back Shamar Griffith led the attack for the Pirates with a pair of touchdowns. In last week's 49-14 rout of Moberly, Griffith rushed for 170 yards and four scores. ... Helias is coming off a 63-28 win over Warrenton, which was the Crusaders' fourth straight win. Helias rolled up 581 yards of total offense, with Kaleb Davis racking up 116 yards and scoring three times on only seven carries. Jacob Storms added 113 yards on only 10 attempts. ... The Pirates' two losses this season have been to Quincy-Notre Dame back in August and to Battle to close out the regular season, 50-27. Battle beat Helias 64-29 on Sept. 17. ... The winner of this game will play either top-ranked Kearney (10-1) or fourth-ranked Platte County (8-3) in the quarterfinals on Saturday, Nov. 12, at 1 p.m.

Blair Oaks flattened Fulton 42-6 in the district semifinals last week, while Southern Boone outscored O'Fallon Christian 56-35 ... In the regular season meeting between these teams, the Falcons jumped out to an 18-0 lead after one quarter and rolled past the Eagles 42-13. Jake Van Ronzelen rushed for 236 yards for the winners --- the Eagles, meanwhile, had just 211 total yards. Also for Blair Oaks, Nolan Hair threw for 197 yards and two touchdowns, but he was also intercepted three times. ... Southern Boone has won five straight since the loss to Blair Oaks. ...Southern Boone's other loss this season was a 32-13 decision to Osage, a team Blair Oaks defeated 51-20. ... Trent Tracy is in his third year as head coach of the Eagles, who've made improvement each year since he arrived --- 4-7 to 6-5 to a now-school record 9-2. Prior to his arrival, Southern Boone had won a total of three games the previous two seasons. ... Terry Walker is in his second year with the Falcons and has compiled a mark of 22-1, with the only loss coming in last year's semifinals to eventual state champion John Burroughs. ... The winner of this game will play either fifth-ranked McCluer South-Berkeley (10-0) or unranked St. Charles West (7-4) in the quarterfinals on Saturday, Nov. 12, at 1 p.m.

Owensville continued to build on its own school record with last week's 26-0 win over Sullivan. No Dutchmen team had ever started the season 7-0 prior to this year. ... It was Owensville's second shutout of the season --- and its second in the last 10 years. ... The Mustangs are coming off a huge win, as well, as they knocked out the rival Osage Indians 39-36. Osage had handled Eldon 32-6 in the regular season. .... Eldon senior Trenton Kidwell, who was out with an injury in the first game, had a huge night --- 178 yards rushing and five touchdowns. ...  "This is everything we could have dreamed of and hoped for senior year," Kidwell told the Lake Sun Leader after the game. ... These teams played back in Week 2 on Aug. 26, with the Dutchmen getting past the Mustangs 48-27. Owensville sealed that outcome by outscoring Eldon 14-0 in the fourth quarter. ... The winner of this game will play either fourth-ranked Monnett (10-1) or unranked Mt. Vernon (7-4) in the quarterfinals on Saturday, Nov. 12, 1 p.m.

Hermann pulled off a mild upset last week with its 26-20 win over the district's No. 1 seed and previously unbeaten South Callaway. ... Garrett Leimkuehler rushed for 174 and three touchdowns for the Bearcats, the last score coming on a bizarre play when the senior recovered his own bad punt and raced 58 yards for a touchdown with just 53 seconds left to put the game away at 26-13. ... Brentwood eliminated Tolton 42-18 in its district semifinal. ... The lone loss for the Eagles this season to Class 3 Orchard Farm, 27-21 in overtime on Sept. 9. ... The Bearcats opened the season 4-0 before losing at Owensville 45-44 and at home to Sullivan 28-8 --- both Class 3 schools. Hermann's other loss was also to a bigger school, Class 4 Union, 32-23. ... The winner of this game will play either eighth-ranked Macon (11-0) or unranked Centralia (8-3) in the quarterfinals on Saturday, Nov. 12, at 1 p.m.

The Panthers rolled into the district title game with a 46-16 win over Clopton last week. Centralia led 43-0 at the half and piled up 433 yards of total offense, 349 of those on the ground. Senior running backs Jackson Evans and Zach Townsend led the onslaught --- Evans rushed for 106 yards and two touchdowns, while Townsend had 102 yards and four scores. ... Centralia limited Clopton to 196 yards of total offense. ... Eighth-ranked Macon outlasted Palmyra 28-21 in overtime. It was the Tigers' fifth win this season by seven points or less and their second win in overtime. ... Macon quarterback Nolan Bright only threw for 104 yards in the victory, but he rushed for 129 yards and two touchdowns. ... The Panthers lost three of their last four to end the regular season after starting 5-0 with three shutouts. The final loss was a narrow 24-23 decision to Macon in the regular-season finale at Macon. ... The winner of this game will play either Brentwood (9-1) or Hermann (8-3) in the quarterfinals on Saturday, Nov. 12, at 1 p.m.

The Eldon Mustangs hope to take Owensville by storm Friday night when they meet the Dutchmen for the Class 3 District 3 championship. 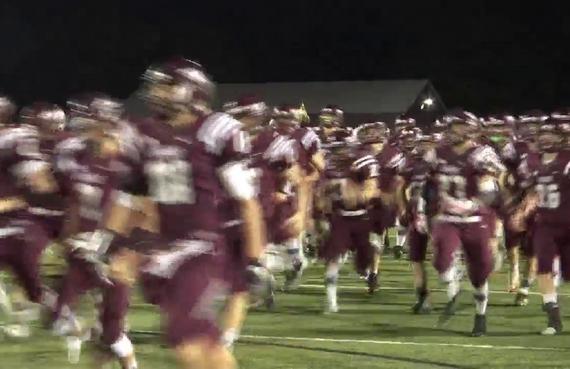 ​quarterfinal berths on the line