to Halloween, our local dentists

NEW BLOOMFIELD, Mo. --- A few years ago, my wife and I both had to work Halloween night, but we left a bowl of candy the size of a Buick on the front porch.

Trick or Treat, little guys and gals! All you precious little ghouls and goblins, please help yourselves! You're adorable!

Within 10 minutes --- this coming from reliable a source --- one ghoul had hauled away all the candy in a 30-gallon garbage bag.

Maybe it was a goblin, not sure about that. But not only did the ghoul/goblin take all the candy, but he/she took the bowl, too.

Really? Trick or treat, smell my feet or give me something good to eat? Sure. But stealing everything, including the bowl?

This is war, kid, because that was a good bowl.

The next year, I pretended we were gone again. We put another Buick Bowl of candy on the porch and I hid in the bushes. But this time, the bowl came with an electric shock that was hooked up to the Nuclear Plant.

Hah! Game on! Go ahead, kid, make my Halloween Night!

(No children were actually harmed during the writing of this column.)

But that year, the game was played properly. Cute kids in cute outfits made their way to the door, looked at the bowl, and took one or two pieces of tasty fun and proudly pranced away.

Soon, while squatting in the bushes, I got leg cramps and went inside. But this was a proud moment for the neighborhood ghouls and goblins.

Then there was last year --- a great, wonderful Halloween night. The usual.

Like you, we do our best to support local dentists by handing out more sugar than a plantation in the Caribbean. And of course, burying the good candy at the bottom of the bowl, hoping it will remain with us.

On this night, no bowl-stealing. No foot smelling. Just cute kids in cute outfits.

After that, the average age is 28.

I'm pretty sure the same "kid" came to our house three or four times. And I'm pretty sure he was at least 21, since he asked me for a beer on his last trip.

"Trick or Treat," he said in a deep bass voice, wearing a hunting hat for a costume and fumbling in his pocket like he had a gun.

By the end of the night, we started handing out candy corn and M&M's one at a time. We were overrun and cleaned out.

The second-to-last kid got a can of lima beans, which expired in 2007, from the back of the cupboard. The last kid got a slice of bologna.

Sorry, last two kids. You probably get picked last for dodge ball, too. 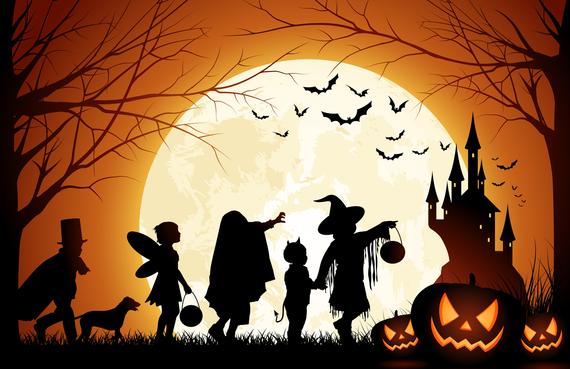