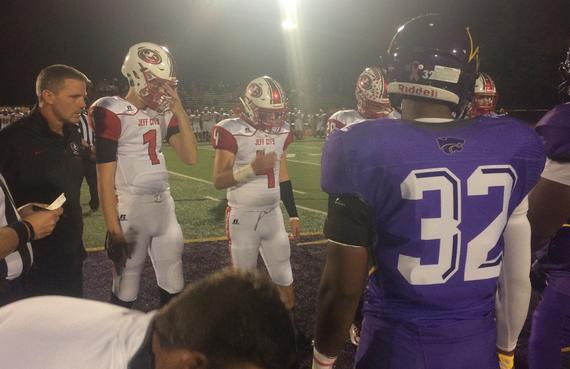 BLUE SPRINGS, Mo. --- This was a landmark year for Jefferson City football.

It was 40 years ago this fall when the Jays won their first state football championship, the first of 10 in a 21-year span.

2017 will be a landmark year, too. This one, however, won't offer much cause for celebration.

It will be 20 years and counting --- the 20th anniversary of the Jays winning their last state championship.

Or, when the senior class included a manchild named Justin Smith, who grew up to be a man --- period --- during his All-American time with the Missouri Tigers, which was followed by a distinguished Pro-Bowl rich, 14-year career in the NFL.

It was also when Bill Clinton was our president. Next year, he'll probably be our First Man, shuffling around the White House in house shoes and a bath robe, hitting on the help.

Let that image sink in.

The 2016 season for the Jays has come to an end, as the third-ranked Blue Springs Wildcats --- led by the five-touchdown, 247-yard rushing night of 5-7 junior Michael Warmack --- turned back the 10th-ranked Jays 56-46 in a wild and crazy Class 6 District 3 semifinal clash Friday night.

It was once again a struggling defense that doomed the Jays (6-5), who were plundered for a staggering 254 points in their five losses this season.

In a game last month, you might remember, Jefferson City scored 59 points --- and lost.

This one didn't end up 65-59, but it was close, as a valiant rally by the Jays fell short.

The Wildcats (9-2) moved it into Jefferson City territory on their first two possessions, but the efforts ended on a missed field goal and an empty fourth-and-long attempt.

But after the latter, the Jays lost a fumble at their own 20 on the next play --- and the Wildcats made them pay. On the next snap, Dylan Cowling dashed the distance to give Blue Springs a 7-0 lead at the 4:13 mark of the opening quarter.

The point-after was botched by a bad snap, however, and the Jays were chasing --- but never catching --- the Wildcats the rest of the night.

Blue Springs --- which is pursuing the school's third state title in six years and sixth overall --- made it 14-6 early in the second quarter on Warmack 19-yard run, and Warmack later added a 6-yard score late in the half.

In between, the Jays sprinted 82 yards in five plays, a drive capped on a splendid 31-yard touchdown snag by Allan Roetten, who fought off two defenders to pull in the pass from See. The pass for two was no good, and the Jays trailed 21-12 at the break.

Before the Jays ran a play in the second half, they trailed 35-12.

The ensuing pooch-kickoff was covered by Blue Springs at the Jefferson City 23 and five plays later, Warmack's third touchdown of the night, this one on a 12-yard run, made it a 23-point margin.

Jefferson City tried to hang around, getting within 35-18 on See's 32-yard toss to Tyler Bise. The try for two failed, however --- point-afters were a problem all night --- which left it a three-score game with 4:42 left in the third quarter.

The Wildcats kept scoring, but so did the Jays. This team did not quit.

After Warmack scored two more touchdowns to build the lead to 49-18 with 11 minutes left, it was a 31-point game and it was over.

Well, not quite, as Jefferson City flexed its offensive muscle down the stretch.

In a 28-point outburst, the Jays scored on a 25-yard pass from See to Adam Huff, touchdown runs of 3 and 2 yards by Rashaun Woods, and See's 8-yard run.

After the score by See, the Jays --- almost unbelievably --- were a two-point conversion away from making it a one-possession game with still 1:28 seconds left. But it failed, leaving it at 56-46.

The Jays did recover the ensuing onside kick, but turned it over on downs with 22 seconds left.

But it still wasn't enough.

This closes the book on 2016, but there's always next year.