OWENSVILLE, Mo. --- What a season for Owensville football, an amazing, record-setting fun run of success.

How good have they been? So good, they keep breaking their own school record.

In Week 7, the Dutchmen dusted Union 47-6 to improve to 7-0, the first team in school history to reach that level of success to start a season.

The school record lasted only seven days. The following week, the Dutchmen went to 8-0.

"So far, it's been a pretty good year," understated Owensville head coach Dale Long said. "We've met all our expectations we had coming into the season --- and we had high expectations."

The team isn't perfect, no team is. But their record certainly is.

"The kids have been buying into what we're doing, starting in the offseason, and that's been a big part of our success," Long said. "And having the community support we've had, watching people come out, and how things have been developing throughout the season has been a lot of fun."

It's been a fun year for Owensville sports, period, a calendar year that started with the historic season of the girls basketball team that went to the Final Four under the direction favorite son, Steve Tappmeyer.

"A lot of people saw what those girls did," Long said, "and everybody wanted to be a part of it. He was able to do great things with that team ... I do believe success breeds success.

"Whenever you have a lot of success, people not only want to be around it, but they're willing to work a little bit harder for it."

This has not been an overnight success story for Long and the Dutchmen.

Long, 34, is from Kansas City, where he played four years at Oak Park, before playing four years at William Jewell. Now in his sixth year at Owensville, the program bottomed-out in his second season after going 5-6 in his first.

"It's been a process getting the kids back in our program," Long said. "There for a while, it was rough. We took our licks, but we have a lot of good kids who have worked hard in order to get the success that we've had."

"We've had a lot of good kids in the past," Long continued. "Unfortunately, it didn't work out for them, but they also made it their mission that it wouldn't happen to future classes. And we've been able to move on from there because of that.

"The success has been evident this year and each year, we just try to keep building on it."

This season's team only has seven seniors, so if you think the Dutchmen were good this year ...

"We only have seven, but they're high-quality kids, " Long said, "But next year, we'll have 22 seniors if everybody stays out."

"He's a tall, lanky kid with a lot speed who does a lot of good things for us," Long said. "He's grown up a lot, he's matured a lot. He's a very good athlete, he's genetically gifted."

"He's very, very talented," Long said. "He works hard, he puts in a lot of time and effort, he's a student of the game, and he's very, very humble in what he does. He wants to learn --- there are a lot of times he's called me because he wants to come in and spend time watching extra film.

"He's just a great, overall kid. You can't ask for him to do anything more.

Weirich does more than just carry the football.

"He's our emotional leader," Long said. "He's the guy we go to when we need something to happen."

The Dutchmen are averaging 48 points a game, an average boosted by their 69-point effort last week against Buffalo.

Stop them if you can.

"We're pretty balanced in what we do," Long said. "We're a spread team, but we do a lot of different things with it. It's really no secret, we're willing to take whatever the defense gives us.

"We have a lot of weapons. If you shut one guy down, something else is going to open up."

Owensville closed out the regular season two weeks ago against St. Clair and scored 63 points --- but still only won by 10.

"It was a track meet," Long said. "It was just one of those things."

No overtimes, no misprint, no kidding.

This game really isn't that complicated.

"It's been a lot of fun going out there," Long said, "looking behind you and seeing the stands packed. The kids feed off it, it's good to be around."

Don't let Sullivan's record fool you. The Eagles have won five of six after starting the season 0-4, and would have a six-game winning streak if not for the loss to the Dutchmen --- a game Owensville trailed 26-19 with less than two minutes left before rallying for a 29-26 victory at Sullivan.

"Sullivan's a good team, they're tough to stop," Long said. "They're run-heavy, their game plan is to keep their offense out there as long as they can and keep our offense off the field. They present some challenges for us.

Another wrinkle would be this --- Owensville making the playoffs, which would be just the ninth time in school history. Granted, winning a district title now, with eight-team districts, is tougher than it used to be, but this team might be equipped to do it.

"We want to get to the state title game," Long said. "In order to do that, we have to take care of things week by week."

And in the process, they'd keep breaking their own record, week by week.

There's been plenty of reason to celebrate this year in Owensville. 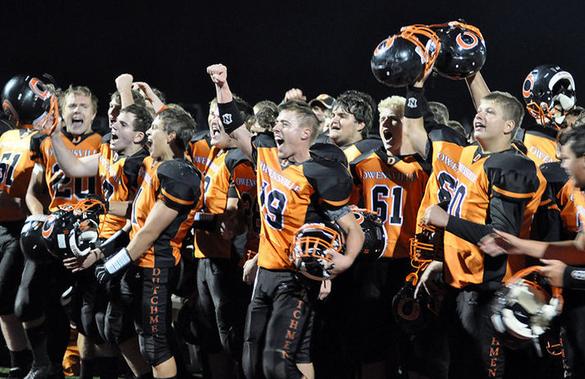