RIDGEDALE, Mo. --- Scott Hovis has finally made it inside the ropes.

Not exactly what he had in mind at first, but this is still one, great treat.

It's like being on the field during a game with Tom Brady, or on the diamond with Max Scherzer, or on the court with LeBron James.

You just don't have to worry about being blindsided, beaned, or dunked on when you're inside the ropes.

Hovis, a native of Jefferson City, had the honor of being the caddy for two-time U.S. Open champion Andy North last weekend at the Champions Tour's Legends of Golf, which was held just minutes south of Branson.

"In my mind, I was wanting to play myself and have someone caddy for me someday," Hovis said with a smile. "I'd never really thought about it (being a caddy) before.

"But it's something you can't explain, how much fun it is and to be able to do it at these facilities. Being around the best players in the world, they really are the legends of golf ... being around Jack (Nicklaus) and Gary Player and (Tom) Watson, it's just unbelievable."

As is, apparently, Mr. North, who's best known these days for his work with ESPN as the network's lead golf analyst.

"What you see is what you get; he's unbelievably one of the kindest guys I've ever met," Hovis said. "He has a big heart, he's just a great guy.

"I was blown away last year when I first met him, just how genuine he was. The way he comes across in his interviews and talking on TV, that's how he is as a person. He doesn't change when the camera's off. Not all the guys are the same when they're away from the cameras as they are on camera, but he is."

Hovis --- who's the executive director of the Missouri Golf Association --- first caddied for Denis Watson at the Legends in 2014, when Watson was a late entry and needed help. Last year, the same thing, and that's where he first met North.

Hovis, 42, caddied for North during the practice rounds, before working for David Graham during the regular tournament. North, however, never forgot those days with Hovis.

"We spent a couple of days together last year and had a great time, it was really fun," North said. "So I called him a couple months ago and asked him if he'd be interested in working the whole week with me this year. So it worked out. He's a terrific guy and we had a really good time, even though I didn't play nearly as well the last couple days as I would have liked to.

"But unfortunately, sometimes at our age it doesn't work quite as well as you'd like it to."

North played with Tom Watson, both are 66, during the two-man team event. They finished 21st, but that certainly could have been better if not for one club in the bag.

"We really struggled," North said. "A lot of years, we made putts when we needed to, but we couldn't make any this weekend. There was one hole Sunday where we both hit it in there five or six feet, and we both missed. But that happens.

"When you start hitting good putts that don't go in, you're really in trouble, because the bad ones definitely won't. And once you start trying to make putts, you never make them. I think we both got to that point, trying so hard to make them instead of just aiming and hitting it."

Hovis knows as much.

"All the guys out there hit it pretty good, they all hit it about the same," he said. "But week in and week out, it's whoever putts the best, it all comes down to that. Andy and Tom, they just couldn't make a putt."

But the rest of their games are rock solid, Hovis said.

"He's got great hands, he still has great hands, a great short game. He's a great player, he can do it all. He joked with the guys we were playing with at Buffalo Ridge that he was only hitting it 230 or 240. But there were times he was the longest driver in our group, knocking it by Colin (Montomerie), Mark (O'Meara) and Watson. So he still hits it out there pretty good."

North only plays two or three tournaments a year, while the others --- especially Montgomerie and O'Meara --- are still very active on the Champions Tour.

But it really doesn't matter how often you play or how good you are, every golfer has one thing in common.

"The average golfer gets mad whenever they hit a bad shot," Hovis said. "But listen, I just walked with two former No. 1 players in the world (North and Watson) and two others guys who've won majors (O'Meara and Montgomerie), and they hit bad shots. It happens. There's no one in the world who hits every shot perfect.

"That's something people need to understand. What makes these guys different is that when they hit a bad shot, they don't hit another one after it."

Let's be honest, these guys don't hit very many bad shots ... and they never take anything for granted.

"Then they take it from there."

Hovis is an accomplished player in his own right, one who wasn't far from being inside the ropes as a player. He was a three-time All-State player for the Jefferson City Jays, he won the individual state championship in 1992, he played four years at Kansas State and was an honorable mention All-American in 1995, and he later missed qualifying for the U.S. Open by only one shot.

"When it's someone you don't know exceptionally well, it helps when they understand what you're trying to do and where you're trying to get to," North said. "The last couple of days, he kept telling me my rhythm was too fast, faster than it had been all week long, and I couldn't get it slowed down.

These players might be 55 or 65 now, but the competitive fire still burns, just like it did when they were 25 or 35.

"I think that's why guys were good players, they're very competitive, it doesn't matter what they're doing," North said. "I still love getting out there and trying to figure out how to try to beat guys. Unfortunately, your body can't do what your mind wants it to do. There's just stuff you can't do anymore, but it's fun to try."

It sure is, and Hovis was alongside North every step of the way at the Legends. He was also there for some off-the-course moments, as well.

"It's interesting going to dinner with them," Hovis said, "because people are staring and gawking at them and they'll walk into tables or trash cans. They're like, 'Holy cow, that's Tom Watson!'

Do you blame him? 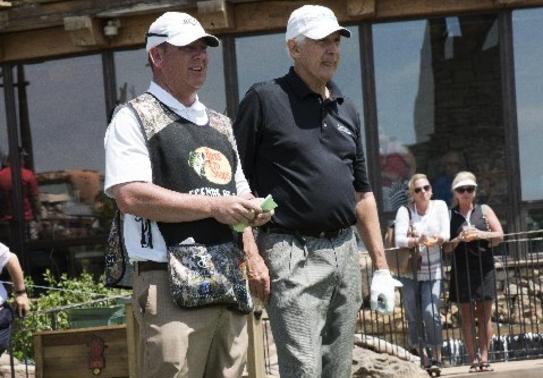 Scott Hovis and Andy North discuss club selection on the first hole at Top of the Rock during last weekend's Legends of Golf Tournament just south of Branson.

Inside the Legends ropes with