As a result, the defending state champs are defending no more --- their postseason work is done.

Both teams entered this bout on the skids, as both had dropped their last three games to finish the regular season.

But it's the Jays (6-4, No. 4 district seed) who will play on, as Jefferson City avoided its first non-winning season since 2005 and its first in the 11-year tenure of head coach Ted LePage.

It will only get more difficult from here, however, as Jefferson City will play at the top-seeded and third-ranked Blue Springs Wildcats (8-2) next Friday. Blue Springs rolled over Francis Howell Central 49-8 in its first-round game Friday night.

Playing before the smallest home crowd of the season, the Jays never trailed in this one, taking a 7-0 lead on a seven-yard run by Rashaun Woods just 2 1/2 minutes into the game. The score was set up on a fumble recovery by Gaven Strobel at the 21 of the Jaguars (4-6), and was made possible after a key fourth-down conversion toss from See to Adam Huff.

But "All Purpose" Barnes --- who's had a fabulous season in all three phases --- blocked the point-after to leave it 21-20 at the break.

The Jays led the rest of the way.

The See to Barnes connection accounted for Jefferson City's other scores in the first half, as the seniors hooked up on touchdown plays of 36 and 70 yards.

It was more See to start the fourth, but this time with his legs. Scrambling right, he dashed to the end zone on a 7-yard run to cap a to make it 39-20.

The Jaguars, who received three touchdowns from Jerome Hawkins, made it mildly interesting --- back to a two-score game at 39-28 --- when Hawkins caught a 5-yard touchdown pass from Camden Sprouse with 7:09 left.

But the Jays then supplied the knockout blow to the champs, marching 70 yards in nine plays, chewing 5 1/2 minutes off the clock and scoring on a 3-yard run with 2:35 left to put it away.

Historically, this was a landmark season for Jefferson City, as the school celebrated the 40th anniversary of the Jays' first state championship in 1976.

Barring an unexpected run to glory this season, however, next year will mark the 20th anniversary of Jefferson City's last state championship, 1997. 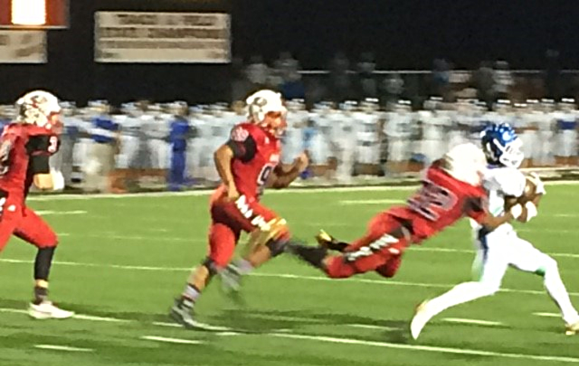