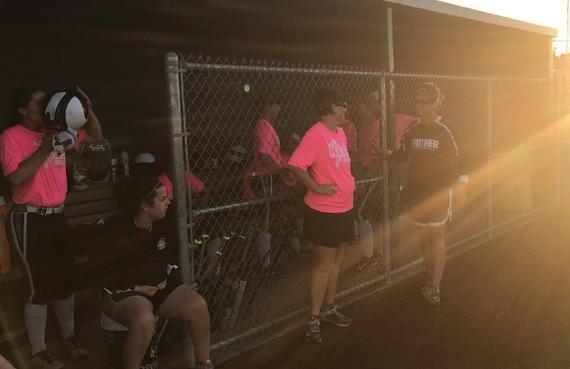 The sun certainly isn't setting on Jill Angell and the Centralia softball program, as the Lady Panthers have advanced to the Final Four for the fourth time in six years.

WARDSVILLE, Mo. --- This is nothing new for the Blair Oaks Lady Falcons, either.

While the Centralia Lady Panthers are making their fourth trip to the Final Four in six years, the Lady Falcons have punched their ticket to the semifinals for the eighth time in school history.

"It hasn't sunk in it, it feels like it will sink in Thursday when we hop on the bus," said Macyn Wilbers, who doubled and scored the only run on a fielder's choice by Megan Mithcem in Blair Oaks' 1-0 quarterfinal win over Pleasant Hope on Saturday.

Sophomore Makenna Kliethermes was splendid in victory against Pleasant Hope, as she tossed a three-hitter and struck out 13.

Blair Oaks, which won the state championship in 2009, is back in the Final Four after a three-year absence. The Lady Falcons finished second in 2013, losing to Centralia 9-2 in the title game.

Centralia is lurking on the other side of the bracket again this year. In the regular season, the Lady Panthers leveled the Lady Falcons, 15-1 --- but that was back in August.

"One of our goals as coaches, every year, is to hopefully let our team experience the Final Four," Blair Oaks coach Sharon Buschjost said. "But that's pretty tough to do, so we try to make it as special as we can.

"With this group, they're very deserving, hard-working girls, and I'd love to see them celebrate a championship."

Centralia's decade of dominance
continues with return trip to Final 4

CENTRALIA, Mo. --- How do you keep interest at a level high in a successful softball program?

"We had a game against Palmyra and the varsity team brought some pizza for them (the younger girls in the Centralia program)," Lady Panthers coach Jill Angell said. "So they sat there and ate pizza and watched the Palmyra game, which was for the conference title.

"We try to include our younger kids as much as we can and make them feel like they're important. It's crucial to our program that we see them early and they know that, 'Hey, coach Angell cares.'"

Oh, and free t-shirts, too.

"At our summer games," Angell continued, "we have girls in fourth or fifth grade, as young as 10 or 11, running the scoreboard. They're paying attention and watching the games; it gets them interested in the program and let's them see how the game is played. Then, we give them t-shirts, that's what we pay them.

"And they always want to come back."

Start them early, see them later.

The Centralia softball machine is adding another chapter to its decade of dominance as the Lady Panthers (27-1) have advanced to the Class 2 Final Four in Springfield where they'll meet defending state champion Lathrop (26-2) in the semifinals at 11 a.m. in Springfield.

"Gosh, I'd love to win it all," Angell said. "But it's one of those things, and I thought about this this morning --- there are 96 teams in Class 2 and we're one of four, so even if we don't win, how very, very lucky we've been, just to get the opportunity.

"I hope I can remember that in the heat of the moment. It's been a great ride."

What a great ride these last few years have been, a ride sparked in the early years by the dynamic duo of pitcher Baylee Douglass and catcher Sydney Creel.

Now, Douglass and Creel have been replaced by names like Preston and Duncan.

Centralia's success this decade has been staggering.

"I've got great kids and I've got great parents, I don't do anything," said Angell, vastly understating the obvious --- it's her program. "They seem to buy into our program. There are certain things we want them to do --- and it's not necessarily the way they did it with their summer program --- but they buy into that and they do it.

"If you don't have good kids, it wouldn't work. That's why we've been successful."

Many of these Lady Panthers hone their skills on traveling teams in the summer, starting at an early age. But then Angell puts on the finishing touches --- and this Angell has a magic touch, as she's built one of the top programs in the state during her 16 years at the helm.

"I've got a great group of kids and a great core group of seniors," Angell said. "These seniors were freshmen when we won state in 2013, so they've kind of had a taste of it. But this will be a much more involved taste, because they're all players."

Madison Preston and Nicole Duncan, both seniors, drive the bus. How good are they? Both are headed to the SEC to play softball but sadly, neither is headed to Mizzou --- Preston's going to Alabama, Duncan to Arkansas.

Preston starting making an impact when she was a freshman --- her grand slam highlighted a seven-run first inning in Centralia's 9-2 win over Blair Oaks in the 2013 Class 3 state championship game.

"She's had her ups and downs, but she's had a super year," Angell said. "She's been spot-on when she needed to be good."

"It was amazing to me," Angell said, "how much more relaxed Madison was after we scored."

It's not like Centralia spotted Preston a seven-run lead. The Lady Panthers scored one run --- one --- and that proved to be the difference, as the lefthander tossed a no-hitter and struck out 14 in the 1-0 win.

"That was a nailbiter," Angell said.

It was a game of chewed nails, thrills and chills with everything on the line.

"But that was a good game for us going in (to the Final Four), because we haven't had many games like that this year."

Duncan runs the show at catcher --- she followed Creel, giving Centralia many years of great play at the second-most important position on the field. And just like Creel before her, she doesn't look toward the dugout to get signs, something most high school catchers do on a regular basis.

"She calls the game, I don't," Angell said. "She sees where the batter is set up, she knows what pitch is going to work best. She just does an incredible job of calling Madison and also catching Madison, because Madison throws the ball low --- it's hard to catch her and keep the ball in front of you.

"The two of them really work well together."

Perhaps some of these players were the ones enjoying the free pizza and t-shirts years ago.

"They grow up in this program and they improve as the years go along," Angell said. "Then if we're really lucky, this is what happens.

"They're totally embracing this, they're having a good time. And that's the key, this is a memory they'll have for the rest of their lives. Someday they'll be able to tell their kids and their grandkids: 'Here's what I got to do ...'

"Not everybody gets to do that."

While this is nothing new for Centralia, winning never gets old.

"I keep thinking I'll outgrow it," Angell, 55, continued, "but I haven't yet. When you don't have that excitement and that love for the game, then I'll know it's time. But I still love it, so I don't think it's quite time just yet.

"I love the kids, I think you have to, I don't think you could do this if you didn't. Do they drive me crazy sometimes? Sure, absolutely. But they're great people, that's one of the things we want to teach them --- there's more to life than softball.

"One of the kids wrote something to me the other day that said: 'I've learned so much more than softball.' And I thought: 'You know what? You couldn't have told me anything that would have pleased me more."

To be sure, there's a lot more to building a winner than free pizza.