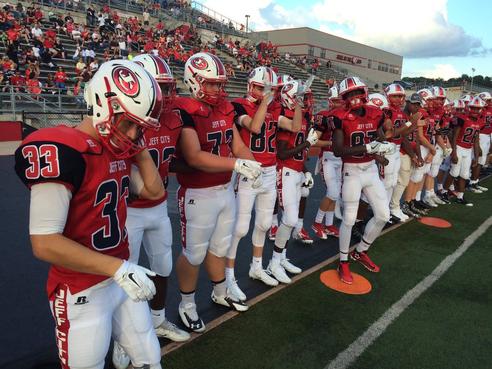 The Spartans have outscored their opponents 437-203 this season. You like offense? That means there have been a total of 670 points scored in their nine games, an average of 74 ppg. ... The great season for senior quarterback Brevinn Tyler continued against Hannibal, as he threw for two touchdowns and ran for another score. He's now accounted for a 41 touchdowns (21 rushing, 20 passing), an average of more than four scores per game. ... The Spartans scored the final 28 points against the Pirates to lock up the victory. ... The Spartans have given up 184 points in their last six games after allowing only 19 in their first three. ... Battle will host either Raytown (2-7) or Ruskin (2-7) in the second round.

The Jays are trying to avoid their first non-winning season since 2005 and the first for head coach Ted LePage. ... This is a rematch of last year's district semifinals, but this one's at Adkins Stadium. Last season, the Jaguars beat the Jays 48-21 in Blue Springs on their way to winning the Class 6 state championship. ... Both teams enter district play on three-game losing streaks, and five of those losses have been to ranked teams. The Jays have lost to CBC (No. 1 Class 6), Battle (No. 2 Class 5) and Rockhurst (No. 6 Class 6), while the Jaguars have lost to Lee's Summit (No. 5 Class 6), Blue Springs (No. 2 Class 6) and unranked Park Hill. ... The Jays have given up 154 points during three-game skid and 208 points in their four losses. ... The winner of this game will either play at Blue Springs (7-2) or host Francis Howell Central (2-7).

The Falcons routed the Lakers last week behind a huge night by Glendale quarterback Alex Huston, who was a staggering 34-of-46 for 486 yards and seven touchdowns. But this was nothing new for Huston, who's thrown for 4,492 yards and 56 touchdowns this season. Huston hasn't made a college commitment just yet --- he's only a junior. ... The setback snapped Camdenton's four-game winning streak. The Lakers gave up 15 fewer points in those four games (48) than they did against Glendale. ... The winner of this game will either play at perennial Class 4 powerhouse Webb City (6-3) or host Marshfield (2-7).

Helias actually ended up the No. 1 seed in this district, edging No. 2 Hannibal by 0.88 of a point. But the state will switch the order of seeding if the teams are seeded consecutively and the trailing team won the head-to-head matchup. ... Warrensburg hasn't had a winning season since 2010. ... The Crusaders' win over DeSmet earned them back-to-back victories for the first time this season. ... It was a record-setting night for a pair of Crusaders against DeSmet. Zach Stiles intercepted four passes to break the single-game school record, while Jacob Storms rushed for 315 yards to break the single-game mark set by Chris Hentges (306 yards), a record that had stood for 33 years. And Storms did it on just 19 carries. ... If Helias wins, it would host either Warrenton (5-4) or Kirksville (4-5) in the district semifinals.

The Spartans have lost two of three and three of five. ... In the loss to Mexico, Moberly couldn't solve junior running back/defensive back Cameron Holman (see Mexico capsule below), who dominated the Spartans on both sides of the ball. ... Last year as the district's No. 7 seed, Moberly's season came to an end with a first-round 41-8 loss to Mexico, which has since dropped to Class 3. ... With a win, the Spartans will either host Marshall (0-9) or play at Hannibal (7-2)

The Falcons completed their second straight unbeaten regular season under second-year head coach Terry Walker. Prior to last season, Blair Oaks hadn't enjoyed such a season since 2005. ... Jake Von Ronzelen fueled the win over struggling Warsaw --- which has now lost 25 straight --- by rushing for 143 yards and three touchdowns on only six carries. It was the senior's seventh 100-yard rushing game of the season. ... Blair Oaks has outscored its opponents 381-104 this season, an average margin of victory of 43-12. ... Blair Oaks will host either Fulton (4-5) or Winfield (3-5) in the second round.

The Dutchmen wrapped up the first unbeaten regular season in school history last week with the wild and crazy win over St. Clair. ... Owensville, which led 42-27 at the half, received huge nights from junior quarterback Wyatt Ellis and junior running back Tanner Rector. The 6-2, 190-pound Ellis threw for three touchdowns --- one of those to the 5-9, 170-pound Rector --- and also ran for two scores. Along with his receiving touchdown, Rector also rushed for three scores. ... The Dutchmen only have seven seniors on their roster. ... Owensville has outscored its opponents 411-206. ... The Bison have lost six straight after starting the season 2-1. ... With a win, Owensville will host either Sullivan (4-5) or Logan-Rogersville (4-7) in the second round.

The surging Bulldogs have won five straight and seven of eight since opening the season with a 35-13 home loss to Class 5 power Battle. ... Junior running back/defensive back Cameron Holman had a massive game in the win over Moberly --- he rushed for 296 yards and four touchdowns, and also had a fumble recovery and interception. ... Christian lost 55-14 last week to St. Charles Lutheran, just one week after the Eagles won their only game this season, 24-21 over Westminster Christian. ... With a win, the Bulldogs will host either Southern Boone (7-2) or Wright City (3-6) in the second round.

The Bulldogs brushed aside Van Far last week to secure the second unbeaten regular season in school history --- and the second in three years. The 2014 team ended up in the state championship game. ... The Bulldogs have scored 179 points in their last three games. ... South Callaway has cracked into the Top 10 of the state poll for the first time this season. ... The Bulldogs beat Montgomery County 26-6 on Sept. 16 in Mokane. ... The Wildcats have lost three straight, including a 62-24 home decision last week to surging North Callaway. ... With a win, the Bulldogs will host either Hermann (6-3) or Hallsville (4-5) in the second round.

In the win over California, junior quarterback Zach Wheeler was 19-of-29 for 207 yards and two touchdowns, both going to Jason Edwards. ...  Osage forced five California turnovers and overcame an early 12-7 deficit to win going away. ... Throwing out the loss to Blair Oaks, the Indians have allowed only 54 points in their other five games down the stretch. ... St. James won its first two games and last two games of the season, wins that were sandwiched around a five-game losing streak. ... Last week, the Tigers pounded winless Pacific, 56-12. ... With a win, Osage will host either Springfield Catholic (6-3) or rival Eldon (5-4), a team the Indians defeated 32-6 two weeks ago.