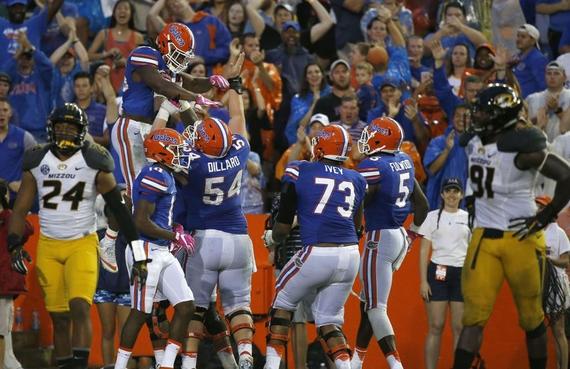 If Tigers don't improve in a hurry,

prospects could be really scary

COLUMBIA, Mo. --- The Missouri Tigers have found themselves in a Stephen King novel/movie.

They got lost in Death Valley only to end up wandering aimlessly through The Swamp.

Scary to watch, that's for sure. That Stephen King is great, isn't he? It's scary enough just looking at him.

Scary, however, isn't necessarily entertaining or fun to watch.

Nobody really expected Missouri go on the road and win at either LSU's home field, affectionately known known as Death Valley, or Florida's home field, lovingly known as The Swamp.

In both games, the Tigers were double-digit underdogs, after all.

But most fans expected, or at least hoped, the Tigers would be competitive. It didn't happen.

When you get outscored 42-7 and 40-14, a combined 82-21, you certainly aren't competitive and you have issues all over the field. You're not scoring and you're not stopping the other team from scoring ... football really isn't that complicated.

Missouri's defense was one of the best in the nation last year, Top 10 in fewest points allowed and yards allowed. But this year has been a different story --- 61st in scoring defense and 100th in yards allowed.

The affair against LSU was the 695th SEC game for the Death Valley Tigers, who are not to be confused with the 'Zou Tigers. LSU rolled up 634 total yards, which is the most yards they've ever racked up against an SEC opponent.

Missouri's defense was coordinated last year by Barry Odom, who's now the head coach. What happened?

LSU hadn't scored a first-quarter touchdown in its first three games or a fourth-quarter touchdown until its fifth. And this team re-wrote the record book, breaking a record that was set 49 years ago (630 yards) and tied 20 years later.

LSU rushed for a staggering 418 yards against Missouri. But to be fair, the DV Tigers have the best running back in the country, Leonard Fournette. Of course, he didn't play, he was inured and in street clothes on the sidelines.

Missouri's defense was better against Florida, but was still plundered for 523 total yards, 287 on the ground where the Gators averaged better than 7 yards a carry. The game of football becomes quite easy when you can average 7 yards a carry; LSU averaged 8.

This balleyhooed defensive line has been gashed. Charles Harris, dubbed as the next Reggie White, has been invisible.

Missouri's offense wasn't good in either game, either, especially against Florida. Drew Lock appears to have regressed to last year's form, as was a miserable 4-of-18 for a sickly 39 yards with two interceptions against the Gators.

Lock did direct three touchdown drives --- unfortunately, two of those were for the Gators, who returned two interceptions for scores.

This is too bad, because Lock looked really good against Delaware State.

And until a last-minute touchdown drive of 99 yards led by back-up QB Marvin Zanders against the Gators' back-up defenders, Florida's defense had outscored Missouri's offense.

There could be reasons for these blowout-losses, unusual reasons, at that.

The week before playing LSU, the DV Tigers had fired their head coach, Les Miles. In-season firings in college football are rare, and they're very rare at a school like LSU. So there was motivation.

The week before playing Florida, there was Hurricane Matthew that postponed the Gators' home game with LSU. That meant extra rest for the home team and extra motivation to win one for those Floridians suffering from Matthew.

Those might be reasons, but they're really excuses. Missouri (2-4, 0-3 SEC) just needs to be better all over the field, that's all.

Or the prospects could be really scary.

Just in time for Halloween.