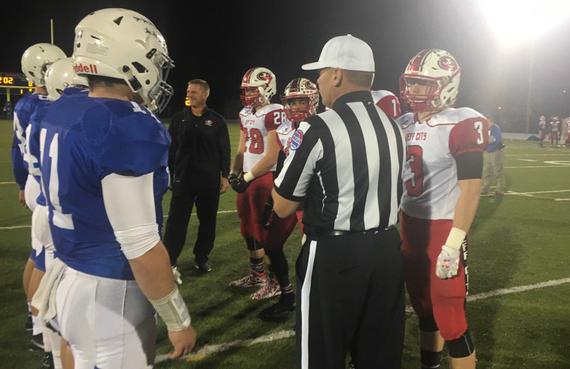 So much for easing into the postseason.

With the start of districts looming --- half the high school football teams in Missouri will see their seasons come to an end next week --- teams are getting one final tuneup this weekend.

Some tuneups are tougher than others.

The Jefferson City Jays --- ranked No. 8 in Class 6 --- hit the road to play at Kansas City Rockhurst, ranked No. 6. Both teams could have really used a win heading into Friday night's game, as both had dropped their last two.

No easy tasks, to be sure.

At Kansas City, the Jays saw something they haven't seen too often this season.

You could almost see this coming after what happened the previous two weeks. On Sept. 30, Jefferson City was lit up for 65 points by CBC at Adkins Stadium; last Friday, Rockhurst held CBC to only 10 points.

The Jays (5-4) entered the game averaging 45 ppg., but failed to score on offense. Jefferson City's lone touchdown came on a 40-yard interception return by Dennis Barnes, who continues to have a huge senior season in all three facets of the game.

The Jays lost a fumble on the first play from scrimmage, setting up the Hawklets at the Jefferson City 11. Three plays later, a 1-yard plunge by Brady McCanles gave Rockhurst a 7-0 lead just 72 seconds into the game.

The Hawklets made it 14-0 on a 25-yard pass from Derek Green to a wide-open Ross Elder with 4:23 left in the opening frame, before the lead blossomed 21-0 early in the second quarter --- and that's where it stayed at the break --- when Chance May found Teahan from 25 yards out to cap a 66-yard drive. It's also a drive that two-way May set up with his interception at the Hawklets' 34.

After Elder's 28-run bumped it to 28-0, Barnes got the Jays on the board with his Pick Six midway through the third quarter to make it 28-6.

But Rockhurst blew it open with three touchdowns in the fourth to win going away.

This was Chapter 40 of this storied rivalry, which Rockhurst now leads 25-15. The Jays did beat the Hawklets 55-20 last year in Jefferson City, but Friday night's outcome was Rockhurst's 17th win in the last 19 meetings.

Jefferson City, which had only 88 total yards in the first half and 217 for the game, will host either Rock Bridge or Blue Springs South in its district opener Friday.

At Hannibal, the Spartans weren't going to let this one go down to the wire.

Last Friday, Battle scored the game-winning touchdown with just 38 seconds left in the win over Jefferson City, after beating beat Truman in overtime the week before.

In this one, the Pirates had a 27-22 lead in the third quarter after a 42-yard pass from Trevor Watson to Eric Jones. It was shaping up to be another fight to the finish, but not this time.

The Spartans (9-0) rattled off the final 28 points in the final 17 minutes to pull away for the 23-point victory and wrap up the first unbeaten regular season in school history.

The Spartans sprinted to an early 8-0 lead when Dre Tyler pulled in a screen pass from older brother, Brevinn, and took it 61 yards for a touchdown three minutes into the game.

The Pirates (7-2) answered on Shamar Griffith's 19-yard halfback pass to Will Whittaker to cap a 57-yard drive --- a drive fueled by Battle penalties --- to get the Pirates within 8-7 with 3:50 left in the first quarter.

For Battle, Hunter Smith hit paydirt on a 9-yard run and Brevinn threw nine yards to Dre once again, giving the Spartans the two-point lead at the break.

After the Jones' touchdown to start the second half, Smith dashed 35 yards for a touchdown to give Battle the lead for good at 30-27 with 4:58 left in the third quarter. Smith then piled onto his big night with two more scoring runs, from 9 and 2 yards, while Brevinn Tyler capped the scoring on an 8-yard surge to finish the scoring.

Battle has secured the No. 1 seed in its district tournament and will receive a first-round bye.

The Jefferson City Jays traveled to Kansas City on Friday night to renew their rivalry with the Rockhurst Hawklets.