Yes, Terry Walker does have friends.

This particular friend took a new job last year, the first time he'd ever been a head coach in high school football --- and he'd only be an assistant coach for two years before that.

Now, your buddy's gone undefeated in the regular season his first two years. So much for the steep learning curve, huh? You haven't seen your friend since he took the job, but you've been following his progress closely.

So the question for you, Terry Walker, is this: What would you say to your friend the next time you saw him?

"I'd never really thought about it like that," said the Blair Oaks head coach.

Walker knew where this was going. Say something nice about himself? Not a chance.

"I can only say how we look at it," he continued. "I don't look at winning or losing for our staff or our guys, it's just about making the kids better and trying each week to go out and develop them.

"We know if we develop the players then ultimately, we end up developing the team. And for us, it's all about the team. But people gravitate to the winning and the losing, because ultimately at the end of the day, that's what a lot of things are determined by."

Let's try this again. What what would you say to your friend if he'd done this?

"I would say that he's done a good job, you can't really argue that," Walker said. "The numbers are the numbers. But he would not have done it alone."

That's as far as Walker would go, knowing full-well the question was about him. He refused to budge.

It's how he rolls.

"I can tell you that the success we've had at Blair Oaks, that culture was in place long before I got here or most of my assistants got here," he said. "The expectation was here, so I don't think it's super surprising that the kids have continued to do really well."

True. But prior to last season, the Falcons hadn't had a perfect regular season since 2005. A full 10 years.

Now, Walker and the second-ranked Falcons (8-0) will wrap up their second straight perfect regular season Friday night when they beat Warsaw (0-8), making them 18-0 in such games in his tenure.

To be sure, Walker didn't take over the Bad News Bears, as Blair Oaks went to the semifinals in 2013 and the state championship game in 2012 under Brad Drehle.

Still, what's Walker's done in his first head-coaching job, and the quality staff he's assembled, is worthy of praise. As usual, he deflects it.

"We feel like we've been extremely fortunate, because the kids have worked incredibly hard."

There have been two pivotal moments during this perfect season. The first came in Week 2, with a gritty eight-point win on the road at Oak Grove. The second came two weeks ago against previously unbeaten Osage, when the Falcons overcame a two-touchdown deficit after the first quarter to win going away.

"I was really proud of the way they battled against Osage," Walker said. "You give up two scores in the first six or eight minutes like we did, there are some teams that would fold up their tent and wait for the game to be over. But they didn't, they fought and clawed their way back into it.

"They played hard, and that's all we ever ask them to do. They didn't focus on the scoreboard, they focused on the next play."

Last season, Walker inherited an experienced, senior-dominated team that was ready to win. This season was just the opposite.

"Whenever the season ends, myself and the other coaches will spend a couple of weeks just reflecting on the season," Walker said. "I know some of my thoughts will be how much some of these kids developed over the course of the year. And not just some of the young sophomores we've been playing, but we've had several seniors --- and this was their first year --- to have them develop as they have and step into some key, critical roles and perform like they have has been great to see.

"That's probably what will stick out most for me, because we didn't have a whole lot coming back this year."

Senior leadership has been even more important than usual, simply because the Falcons had so few experienced seniors to lean on. But the senior captains --- Cody Alexander, Jake Van Ronzelen, Brendon Brown and Kaleb Cox --- have risen to the task.

"They've been great leaders," Walker said. "They've been as good as advertised, based upon the seasons they had last year. If we need a play, those four guys are probably going to be right in the middle of it."

But it's all starts at quarterback, the most important position in all of team sports. Sophomore Nolan Hair had the difficult task of replacing older brother, Jordan, who had a splendid career for the Falcons.

"Nolan's not Jordan," Walker said, "and every single one of our assistants will attest to that. Their skill sets are somewhat similar, but their demeanor is different  ... they're definitely two different kids.

"You certainly have to credit Nolan for stepping into some very difficult situations and performing as well as he has. But he's always had 10 guys playing hard and fighting hard beside him to make it a little bit easier."

Speaking of easier ...Friday night should be one of the easier games of the season for the Falcons, who've won their eight games by an average of 41 ppg.

Including the postseason, Blair Oaks has won 21 games under Walker --- which is exactly 21 more wins than Warsaw's had in the same time frame. To say the Wildcats are struggling would be kind, as they've been outscored 341-113 this season and have lost 24 straight, dating back to Sept., 2014.

"If we take care of business and get out there and do our jobs," Walker said, "we should have an opportunity to be successful."

Blair Oaks will have a bye next week as the No. 1 seed in its seven-team district. Even though the overall team health is good --- "We've been very, very lucky, knock on wood." --- don't be surprised if the Falcons get some time off to heal the normal bumps and bruises of the season and re-energize their legs.

They'll have two weeks to get ready for the district semifinals, which will likely be against Fulton. It's bonus time Walker will savor.

"I love the coaching aspect of it," he said. "I love the preparation, watching the kids go out there Monday, Tuesday, Wednesday and Thursday and seeing them improve during the course of the week.

"Certainly, there are aspects of the game I love, too, where you have to anticipate what the other team is doing and make those adjustments. And watching the kids beat a team that they may be a little physically inferior to --- but knowing they did it as a result of all their hard work, their preparation and their dedication to the fundamentals --- that's probably the most fulfilling aspect of the position for me."

Fundamentals + hard work = success. It's a formula as old as the game itself.

If you're a friend of Walker's, tell him he's done a great job the next time you see him.

He deserves to hear it.

Since being hired last year, Terry Walker hasn't lost a regular-season game in two years with the Blair Oaks Falcons. They'll likely make it 18-0 when they meet the winless Warsaw Wildcats on Friday night. 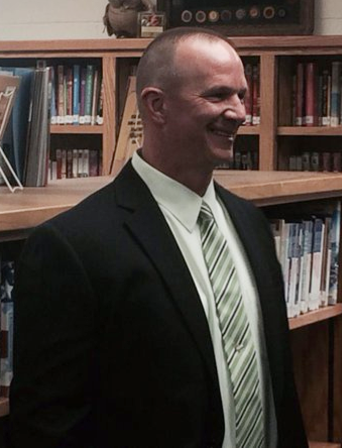