The amazing season for senior quarterback Brevinn Tyler continued against the Jays, as he threw for 237 yards and four touchdowns and ran for 184 yards and one score. He's now accounted for a staggering 38 touchdowns (20 rushing, 18 passing), and he keyed a 23-point fourth-quarter comeback by throwing for three scores, the last two going to younger brother, Dre. ... The Spartans have scored 244 points (49 ppg.) in their last five games, but they've also given up 157 (31 ppg.). ... The Pirates suffered a surprising 35-14 loss in Week 2 to Quincy-Notre Dame, which is just 3-4 on the season. Hannibal has won six straight since, however, and has scored an eye-popping 234 points in its last four games. ... The Pirates beat the Spartans 42-35 last year in Columbia.

The teams meet for Chapter 39 of this storied rivalry, which Rockhurst leads 24-15. The Jays beat the Hawklets 55-20 last year in Jefferson City, but that was just their second win in the last 18 meetings between the schools. ...Top-ranked CBC has had up-close looks at these two teams the last two weeks --- and the games couldn't have been more different. Two weeks ago, the Cadets won a silly 65-59 decision over the Jays in Jefferson City; last week, the Cadets edged Rockhurst 10-3 in a defensive battle in St. Louis. ... The Hawklets have lost two straight, as they were beaten 24-7 the week before by second-ranked Blue Springs. ... The Jays have given up 159 points in their three losses, but just 40 points in their five wins, including two shutouts. ... After getting bulldozed by CBC, Jefferson City's defense played well through three quarters last week, holding explosive Battle to 17 points, before giving up 23 in the last nine minutes. ... Senior quarterback Gunnar See continues to shine, as he's completed 100-of-163 passes for 1,618 yards and 20 touchdowns this season.

The Lakers received six votes in this week's state rankings, 11 votes shy of making the Class 4 Top 10. ... After getting thumped 42-0 at state-ranked Kickapoo on Sept. 9, the Lakers have responded in a big way by winning four straight by a combined 227-48. ... Camdenton has been feasting on lesser competition, however, as none of those four have winning records, including two-win Parkview, one-win Rolla and winless Waynesville. It will get much tougher this week against Glendale, which is enjoying one of its best seasons in school history. . ... After going 8-3 in 2011, Glendale went 9-32 the next four years. ... Glendale jumped out to a 45-0 halftime lead in its 58-7 rout of Waynesville last week. ... The Falcons outscored the Lakers in a shootout last year, 60-41.

Helias is still looking for its second consecutive win this season --- but they haven't lost two straight, either. The Crusaders have lost every odd-numbered game week and won every even-numbered week. ... This is the sixth Saturday game for Helias this season, and all but one of those have been at home. ... The Class 6 Spartans have lost five straight since opening the season 2-1, including 42-7 last week against Jackson. They haven't been competitive in any of the five, as that 35-point setback was their "closest" call during the skid. ... DeSmet went 1-9 the previous two seasons. ... The Spartans and Crusaders didn't play last year.

Smith-Cotton has yet to defeat a team with a winning record this season. ... The Tigers are back at home this week, where they're 3-0. They're just 1-4 on the road. ... The Yellowjackets have been truly dominant this season, outscoring their opponents 361-51 with three shutouts. ... Smith-Cotton beat Center 27-17 last year.

Name the score --- this could be as ugly as the Falcons want it to be. To say the Wildcats are struggling would be kind, as they've been outscored 341-113 this season and have lost 24 straight, dating back to Sept., 2014. On the flip side, the Falcons have outscored their opponents 336-98 this season, have won 19 straight in the regular season, and are 17-0 in such games under second-year head coach Terry Walker. ... Warsaw is coming off a 49-21 loss to Southern Boone, a team Blair Oaks beat 42-13. ... Barring the unexpected, the Falcons will be the No. 1 seed in the district tournament and receive a first-round bye. ... The Falcons beat the Wildcats 57-0 last year.

The Dutchmen are on the road for the third time in four weeks, and are facing a Bulldogs team that could easily be 7-1 instead of 5-3. St. Clair's last two losses have been by a total of six points --- a 28-26 loss to Union and a 25-21 setback to Hermann. ... The 2016 Dutchmen continued to build on their on school record for the best start in school history with last week's win at Sullivan. No team had started a season 7-0 until Owensville's 47-6 home win over Union on Sept. 30. That was also Senior Night, as the school recognized the seven seniors on the team. ... In a wild one last year, the Bulldogs doubled-up the Dutchmen 60-30 in Owensville.

The Bulldogs received 12 votes in the state poll this week, still nine points away from cracking the Top 10. ... Trailing 14-6 after one quarter last week, South Cal exploded for 29 points in the second quarter --- 21 points coming in a 100-second flurry to end the half --- on its way to the 32-point drubbing of Clopton. ... Junior QB Landon Horstman threw for 202 yards and four touchdown passes and also ran for two scores for the Bulldogs, who secured the EMC Conference championship with the win. ... South Cal has scored 131 points in its last two games. ... The Indians are coming a 42-9 loss to Mark Twain, a team South Cal defeated 28-6 on Sept. 23. ... Van Far's wins are over MMA and a Homeschool team out of Arnold, Mo. ... The Bulldogs edged the Indians 34-32 last year.

The Indians bounced back from a draining loss to Blair Oaks with the win over Eldon on Senior Night. Osage secured the victory by outscoring Eldon 20-0 in the second half, ending the Mustangs' three-game losing streak. ... Junior quarterback Zach Wheeler tossed three touchdown passes and ran for a score in the win. ... It's been a punishing finish to a tough season for the Pintos, who face the Indians this week after drawing Blair Oaks last week and Southern Boone the week before. California lost those two games by a combined 100-37, including 52-12 last week. ... California beat Osage 41-21 last year.

The Helias Crusaders, shown here in action against Kansas City Southeast on Aug. 27 at Adkins Stadium, are back in the KRCG Power Poll for area big schools at No. 4 this week. 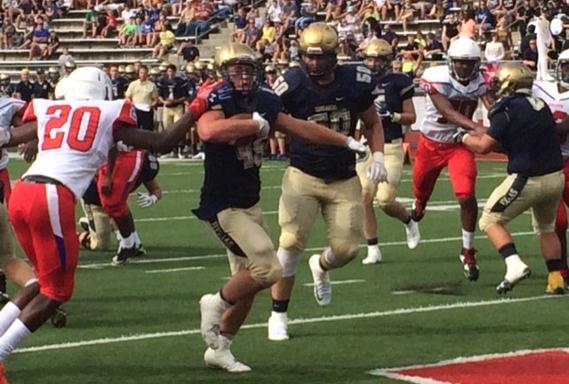