Lincoln quarterback Dennis Vinson (7) completed a school-record 34 passes Saturday, good for 432 yards and a touchdown, but it still wasn't enough as the Blue Tigers fell to Saint Joseph at Reed Stadium.

JEFFERSON CITY, Mo. --- When you're trying to win consecutive games for only the second time in 13 years, these things happen.

When you're trying to have a winning season for the first time in 44 years, these things happen a lot.

A week ago, Lincoln's field goal unit had a record-setting day --- four field goals in a 12-9 win, including a school- and conference-record 54-yarder to win it with 2 seconds left.

Saturday, the same unit looked like Charlie Brown and Lucy.

Sigh. The Blue Tigers did the things to lose a game they probably should have won. We've seen it before.

Those were pivotal moments on this sun-drenched day at Reed Stadium, as the Pumas escaped with a 27-17 win over the Blue Tigers to spoil the fun for a big Homecoming crowd and the record-setting day by junior quarterback Dennis Vinson.

"We squandered a great opportunity today," a visibly upset interim head coach Lee Johnson said. "We missed field goals, we missed touchdowns, we made mistakes defensively we shouldn't have made.

"We just shot ourselves in the foot. It's nothing they did to us, we did it to ourselves."

As the school celebrated its 150th birthday on Homecoming, fans realized not much has changed on the football field the last 40 years.

The first quarter for the Blue Tigers (1-5), however, was a splendid one against the Pumas (4-2). Considering they were facing a competent opponent, it could be considered one of the best quarters the program's produced in decades.

Lincoln outgained Saint Joseph's by a whopping 157 yards to 15, and took a 10-0 lead on a 45-yard field goal by Alex Templeton and a 5-yard run by Vinson.

"The guys came out ready, we were prepared," Johnson said. "We started well, but we have to finish well."

After the first quarter, the rest of the day for Templeton was a lousy one, but it was a great one for Vinson.

While Templeton missed his final three attempts --- and didn't get a chance on another because of a poor snap --- Vinson broke the school-record for completions in a game, finishing 34-of-56 for 432 yards and a touchdown.

"He played well, in spurts, but we still have room for improvement," Johnson said. "Considering the great job he did, we still left a lot of plays on the field."

Despite being badly outplayed most of the half, Saint Joseph's was still was able to take a 14-10 lead at the break thanks to long touchdown passes covering 69 and 52 yards.

"They hadn't done anything," Johnson said, "and we made a couple of mistakes and it seems like the ball hit exactly where we made those mistakes."

The second one was a backbreaker, indeed, coming just 2 seconds before the half.

Templeton missed two field goals in the first half, one of those from just 22 yards.

"Whether it was the kick," Johnson said, "the snap, or the hold, we didn't execute, that's the bottom line. We just didn't execute."

Saint Joseph's made it 20-10 on a 27-yard halfback option from Martez Walker to Nate Tidwell midway through the third quarter. But with 9:39 left in regulation, a 25-yard strike from Vinson to Chris Othelot pulled the Blue Tigers back within 20-17.

The Blue Tigers had a chance to tie it moments later, but a high snap on what would have been a 41-yard field goal attempt kept it a three-point game.

"We continued to fight and got into a situation where we could tie it up," Johnson said, "and we squandered that."

Two plays later, the Pumas put it away on a 44-yard run by Isaac James, when Lincoln's defense seemed to lose interest.

Down 10, the Blue Tigers still had a glimmer of hope, before Templeton missed a 37-yard field goal with 1:26 left.

"We want to change the atmosphere around here," said Johnson, who became interim head coach when Mike Jones was fired Sept. 25. "We have to step up and try to make those plays we need to make when we need to make them.

"We have to go out and be great when we have those opportunities.

To be sure, this was disappointing and frustrating. Again.

Sadly, these things always seem to happen to Lincoln.

In a game they probably should 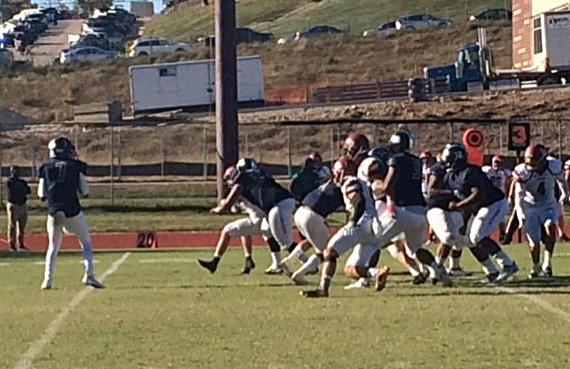