COLUMBIA, Mo. --- Make no mistake, the Battle Spartans have done a lot of great things in their history.

And this is a history that spans only three years.

Friday night: Being crowned the best team in Central Missouri.

Despite the amazing run in its first two years --- including the improbable, if not near-impossible, feat of winning a state title in its first year of postseason eligibility --- Battle had still lost both years to Jefferson City heading Friday night.

This one was close.

And it was a classic.

Brevinn Tyler rushed for 184 yards and a touchdown and threw for 237 yards and four scores --- including the game-winner with just 38 seconds left --- as the Spartans edged the Jays 40-33 on a chippy, chilly night at Battle Field.

"There are a lot of emotions right now," said Spartans coach Justin Conyers, who told the Columbia Tribune earlier in the week that "we dropped the ball as a program" last year.

Battle has lost only three times in its last 21 regular season games, and two of those have been to Jefferson City.

In the first seven weeks of this season, both teams had worn out the scoreboard --- the Jays came in averaging 47 ppg., the Spartans were at 50 ppg. Likewise, both teams had struggled against top competition on defense, especially the Jays, who'd been ripped for 119 points in their two losses.

So certainly, you expected more of the same. You got it, it just took a while.

Not at the outset, as on just the third play of the first possession, Tyler --- a four-year starter at quarterback --- broke free for an 84-yard touchdown run just 23 seconds into the game.

Then with four minutes left in the first quarter, Jaevon McQuitty --- who's signed with Nebraska --- out-battled Dennis Barnes on 29-yard scoring play to make it 14-0.

These two were matched up all night --- and Barnes more than held his own.

Midway through the second quarter and after a Barnes' interception --- his first of two on the night, his seventh and eighth interceptions of the season  --- Jefferson City went 69 yards in six plays to get within 14-6, an effort capped on a 3-yard run by senior quarterback Gunnar See.

After a Battle field goal, it was more Barnes.

First, the 5-8 senior pulled in a pass from See and sprinted 67 yards to the 11, before a highlight-reel 16-yard connection between the duo in the left corner of the end zone with just 6 seconds left in the half cut it 17-12 at the break.

Then came the dizzying finish --- six touchdowns in the game's final 14 minutes.

What huge nights by both Barnes and See. Along with his two interceptions, Barnes caught eight passes for 180 yards and three touchdowns; See was 15-of-23 for 256 yards and four scores.

After the Jays were forced to punt, the Spartans got it back with 4:04 left at their own 36, and with the game on the line.

"I thought we made some great second-half adjustments," Conyers said. "We found something we really liked in the fourth quarter and we ran with it."

Actually, they threw for it.

On the last of a 10-play drive, Tyler found Taylor on a 4-yard score and the two-point conversion gave the Spartans a 40-33 lead with 38 seconds left --- and capped a 23-point Spartan explosion in the final nine minutes.

It wasn't quite over yet, as a big kickoff return by Tyler Bise set the Jays up at the Battle 45 with 29 seconds left. But when McQuitty intercepted See's pass on the next play, it was over.

And they did it in classic fashion.

Spartans break through, edge
Jays in an instant classic 40-33 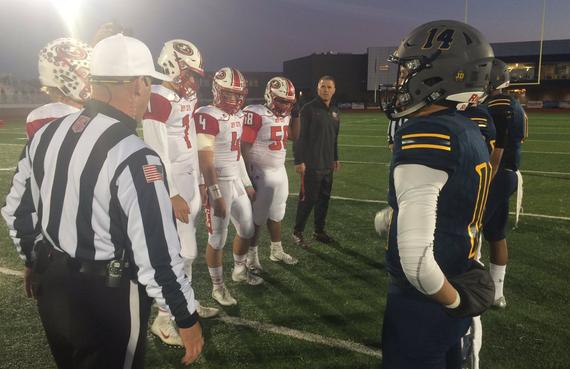