Earlier this season, the Battle Spartans gave up 52 points in a game.

"High school football is so different from week to week, you just don't know what's going to happen," Jays coach Ted LePage said. "We're facing another very, very explosive offense, they do a lot of good things and they've been playing together for an extremely long time.

"People ask, 'Does anybody playing defense anymore?' And I'll refer them to Sunday night when you watched the Chiefs. One week, everything's going well for the Chiefs and Pittsburgh couldn't muster a first down. Then Sunday night, the Steelers couldn't do anything wrong."

The Jays did little wrong on offense against top-ranked CBC, but nearly 600 yards of offense and 59 points still wasn't enough.

"We did a lot of good things on offense, but we still left too many plays and too many points on the field," LePage said. "We couldn't find that six points out there that we needed."

Still, the much bigger issue was Jefferson City's defense that was plundered for 798 total yards and 65 points.

"I told our players after the game that it's a team game, it's always been a team game and it's still a team game," LePage said. "The team we played was extremely good and they have awesome talent, and they played their best game of the year.

"When an offense gets hot and they have high-level players on the field, sometimes it just goes like that."

"Could we have done things better on defense? Heck yes. But sometimes, we were in great spots and they still made the plays. Sometimes, you just have to tip your hat to the other team.

"They just exponentially accelerated every little thing we did wrong."

Which brings us to the Spartans and the Jays ... the offensive stars will once again be out in full force.

For Jefferson City, the best of the best include:

"He's so smooth," LePage said. "It doesn't look like he's trying that hard --- and this is an extreme compliment, this is not a knock --- but he makes it look so easy. So you know the game's really slow for him, he understands the game so well."

"He is extremely good," LePage said. "His explosion step off the line is so good and his strides are so long. I've been asked all week who's better, (CBC junior Kamryn) Babb (being recruited by Ohio State and Missouri, among many others, who had 10 catches for 220 yards vs. the Jays) or this kid. You can just put them in a sack and shake them up and whichever one you draw out, you're going to like the result."

This promises to be like watching a video football game in real life --- again.

"They have three really dynamic athletes with a really good offensive line," LePage said. "They're going to make some plays, we know that, but we have to limit their big plays. We have to make them earn what they get."

That wasn't the case last week, as both CBC and the Jays basically did what they wanted on offense. Was this frustrating to watch or fun to be a part of?

"The game was extremely intense and it was extremely stressful, but at the same time, it is a game and it's meant to be fun. So to be able to experience a little fun with a guy of that nature, that's something I really enjoy."

Expect more of the same Friday night. But the Jays --- who have beaten the Spartans the last two years --- would be advised not to get belted into a 23-point deficit like they did last week.

"When we were down 30-7," LePage said, "I brought the guys together and said: 'We don't go down like this, let's stick this thing out.' Then, things started rolling back the other way, we just ended up a little short.

"I was proud of our players and their resiliency. I have to find a way to help those guys find those other six points, I'm taking this extremely personally. When they give as much effort as they gave,  it is my job to get them over the top." 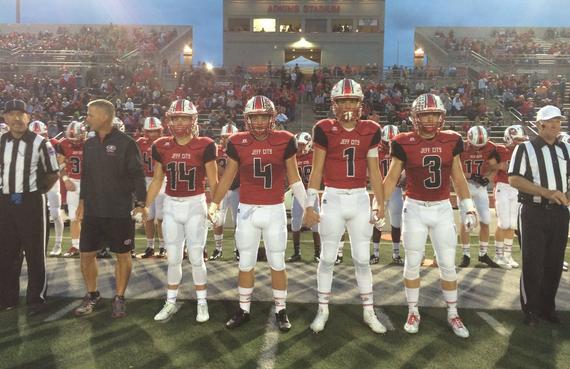 when Jays battle with Spartans