COLUMBIA, Mo. --- By nature and necessity, Mack Rhoades is a numbers guy.

But when the Missouri athletic director is unable to quantify numbers --- when that's basically an impossibility --- he's somewhat at a loss.

What happened last fall is reality, but the lingering perception about the University of Missouri may be even more damning. Perception ... what number is that?

Perception can indeed become a reality, but that's a foreign concept to Rhoades.

"I don't ever look at it in those terms," Rhoades said Tuesday. "We have a vision for this program, how we move forward, here are our goals. You do it with actions, you do the things that we're talking about. The rest will take care of itself."

Rhoades met with a select group of media --- only eight outlets, one person from each --- in an intimate setting for a candid roundtable discussion. He was there to talk about his just-completed first year as the school's AD.

Let's just say on April 26, 2015, he unknowingly was walking into a hornets' nest, a brewing storm that would make national headlines for all the wrong reasons.

Some of the "highlights" from his first year:

* The retirement of Gary Pinkel.

* The one-year self-imposed postseason ban and loss of scholarships by the men's basketball team.

"Time flies when you're having fun," said Rhoades, 50, who was AD at Houston for six years before coming to Mizzou. "Most of the days have flown by pretty quick; some of the days have been a little bit longer than I would have liked.

"The saying, 'Drinking water through a firehose,' that's what it really feels like. Everybody in this room certainly understands that we had some challenges this year, some things I didn't anticipate. Candidly, I thought that was one of my strengths, but there are some things that happened that you can't anticipate.

"But from that, I think there's great opportunity and I'm a great believer in that."

Rhoades is an eternal optimist. After what he's encountered, that's a good thing. That, in itself, has become a necessity.

"The fact you have to deal with all of that in your first six months," Rhoades said, "when you're trying to establish the culture and vision for the future, and establishing relationships ... all of it has been a real challenge to balance it and touch on all those areas. And candidly, we haven't done as good of a job as we would have liked.

"What happened in November wasn't just about our football team. The issues on campus that filtered down to our football team, I needed to have a better understanding of what was going on on campus. When you have 20 minutes to react, you do the best you can.

"But since that event, I think we've done a lot of great things. That's where our focus has been, how do we move forward and make sure that we create an environment within our athletic program where that never happens again."

Rhoades said donations to the athletic department are actually up since Jan. 1, compared to the same period last year. But enrollment for the school is taking a huge hit, an estimated decline of 25 percent for incoming freshman and an overall drop of a staggering $30 million in tuition dollars. Budget cuts will be at least 5 percent, and even the Missouri legislature is tightening the monetary noose to show it's disappointment for how things were handled last fall.

Sales of football season tickets are down 25 percent from this time last year but Rhoades remains hopeful, as he's still expecting an 85- or 86-percent renewal rate. In addition, the events have put an obvious strain on recruiting.

"It's absolutely caused us to have those conversations about the climate on campus and what we're doing in the athletic program," Rhoades said. "I think that's been good, it's made us think about it and talk about it with our potential recruits and (their families)."

"I told our staff: 'We have two choices," he said. "'We're either going to get worse from it or better from it.'

NOT ALL THE NEWS HAS BEEN BAD in Rhoades' first year, it just seems like it.

Wrestler J'Den Cox won his second NCAA national title in three years and most recently, he qualified to represent the United States in the Olympics this summer in Rio de Janeiro.

"He's everything you want a student/athlete to be," Rhoades said. "Yes, you think about the unbelievable success he's had on the mat, but also the way he handles his academics and the way he's become a leader outside the classroom and the area of competition."

Missouri's wrestling team finished sixth at the national tournament, while the swimming and diving teams set school-records for their finishes --- the men were eighth, thanks largely to the individual diving championship of Fabian Schwingenschlogl, and the women were 11th.

The women's basketball team had its best season in 15 years, making the NCAA Tournament and advancing to the second round, while the women's volleyball and gymnastics teams also made appearances in the national tournament. The women's golf team will do likewise in early May.

In addition, the cumulative GPA of 3.03 of the school's athletes set a school record.

"A lot of great things to celebrate," Rhoades said.

"Certainly those won-loss records, none of us are satisfied with that," Rhoades said. "But the great thing is, we've proven that we can win in both of those sports and that's our expectation moving forward. We expect both of them to be nationally relevant."

"The hiring of Barry Odom has excited people. In just a short time, he's connected with people ... and there's the fact he's a true son (of Mizzou). But he's also his own man and he's made his own decisions."

He was a bit more pointed about the basketball team, starting with the mass exodus of transferring players, most recently, Jakeenan Gant.

"I don't like it, but it's certainly a two-way street," Rhoades said. "We want student/athletes who want to be here and be better basketball players, but who also do the right things off the floor. We want a group of young men who are bought in and pulling the rope in the same direction.

"It's not an excuse, Kim (Anderson) didn't have to take the job. But the reality is, he inherited a really, really tough situation and unless you walk these halls and understand what that entails, it's hard to put your arms around it."

Rhoades has basically set a timeline for Anderson --- next year.

"Kim and I have had a lot of frank conversations, and I'll tell you what I told him: 'At the end of next year, we can't feel like we're still three or four years away from having real progress.'"

ALSO WORTH NOTING, Rhoades said the Hearnes Center is "a very inefficient building" that will likely be replaced by a 5,000-seat arena to serve as home for the wrestling, volleyball and gymnastics teams. That will rely, however --- and like everything else --- if the money is there to spend.

"We want somebody thinking about that all the time, 24 hours a day," Rhoades said. "Once you're in the stadium, once you're in the arena, we want an environment of fast-paced excitement ... doing some outside-the-box activities and making sure it's an enjoyable experience. You're battling TV, everything's on TV now ... we want people to feel good about being here."

That's the problem Missouri now faces, finding those people who feel good about being there --- students, athletes and fans, alike. The coaches, at least, will have a new way of doing business.

"It can't always, 100 percent of the time, be about Xs and Os," Rhoades said. "It's got to be about life and some of the issues our kids are going through ... connecting and looking at the areas that touch our student/athletes' lives.

"One of the challenges coming in as a new athletic director, you had a lot of people who'd been here a long time, so they're used to doing something a certain way. Now my challenge to them is, 'Hey, there may be a better way, and it's your job to understand what is the best way.'

"Maybe the way you're doing it IS the best way, but if it's not, then you need to find out the best way and go execute that. That's been the challenge."

One of the final questions for Rhoades during this 50-minute conversation was: If a friend of yours was in the same position at a different school, and had dealt with the same things you've dealt with in your first year, what would you say to him?

"Stay true to your core values, keep your vision, keep your plan, and treat people the right way. There are reasons people are successful and certainly some of that is the foundation that they have.

"And also, get some sleep."

"It's about us doing what we're saying we're going to do, and that's building nationally-relevant athletic programs. That's not anything that happens overnight, but I know it can be done, I've been part of it before, and there's no reason it can't happen here. We want to make sure that the people we have here have an insatiable appetite for greatness, those are the type of people that we have to have.

"This is a special place, there's no reason this place can't be great."

It's won't be easy, but here's hoping Rhoades can get it done.

At the very least, here's hoping his second year is better than his first.

"I told our staff: 'We have two choices. We're either going to get worse from it or better from it. And worse is not an option.'" 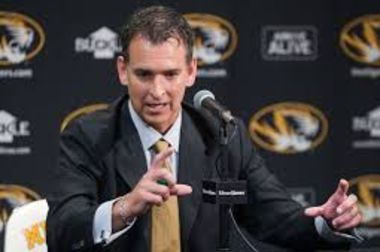 A candid conversation with