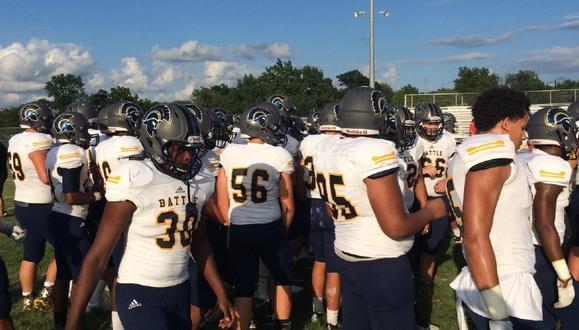 The Battle Spartans, ranked No. 2 in Class 5, will host the Jefferson City Jays, No. 7 in Class 6, in a showdown between the top two teams in the KRCG Power Poll on Friday night.

The Spartans are coming off a surprisingly difficult win over Truman, and it was difficult in more ways than one. Truman hadn't distinguished itself as a serious factor in Class 5, as it's now below .500 at 3-4. The bigger issue, however, was the emotional nature of the game, as the Spartans played with heavy hearts after the death of assistant coach Jon Dinter last week. Dinter had been battling brain cancer the past six years. ... Senior quarterback Brevinn Tyler threw for 178 yards, but did most of the damage with his legs, rushing for 114 yards and five touchdowns. ... The Spartans have scored 204 points (51 ppg.) in their last four games, but they've also given up 124 (31 ppg.). ... The Jays beat the Spartans 44-14 last year and 38-20 in 2014.

This looks to be a high-scoring battle with Battle, to say the least --- the first team to 50 may or may not win. The Jays are averaging 47 ppg., while the Spartans are at 50 ppg. But both teams have struggled on defense, at times --- Battle won one game, despite giving up 52 points to Vianney; Jefferson City has given up 119 points in its two losses, and was plundered for 798 total yards by CBC last week. ... The Jays could have been blown out last week, but they were able to overcome deficits of 30-7 and 37-14, taking the game down to an onside kick in the closing seconds. ... Senior running back Rashaun Woods has been huge the last two games, rushing for 395 yards and a whopping eight touchdowns. Senior QB Gunnar See has also been big, as he's a combined 31-of-46 for 562 yards and seven scores.

After getting thumped 42-0 at state-ranked Kickapoo on Sept. 9, the Lakers have responded in a big way by outscoring their last three opponents 194-28. ... Jay Griffin rushed for 152 yards and three touchdowns last week for the Lakers, who scored the final 50 points against the Tigers. ... The win over Waynesville dropped Brad Drehle's Tigers to 0-7. ... Both the Lakers and Eagles have played Waynesville the past two weeks, with the Lakers winning by 44 and the Eagles winning by 15. ... Joplin beat Camdenton 27-12 last year.

With several of our area big schools struggling, the Bruins are back in the poll after starting the season 0-5. ... SLUH has lost three straight --- a streak that started against Jefferson City on Sept. 16 --- since senior wide receiver/defensive back Tony Adams suffered a season-ending knee injury. Adams, an Illinois recruit, led the Jr. Billikens in receptions, yards, touchdowns and interceptions at the time of the injury. ... The teams didn't play last year.

Blair Oaks brushed aside their top two competitors in the Tri-County Conference with relative ease the last two weeks, beating Southern Boone and Osage by a combined 82-29. The Falcons finished off the Indians last week by outscoring them 40-3 in the final three quarters. ... The Falcons and Pintos have four common opponents. Both have beaten Hallsville --- the Pintos by six points, the Falcons by 41. Blair Oaks has beaten Versailles, Eldon and Southern Boone by an average of 33 ppg.; California lost to those three by an average of 9 ppg. ... The Pintos dropped a 48-25 decision last week at Southern Boone. The 25 points is their second-highest point total of the season, while the Falcons have scored 28 or more every game and are averaging 40.6 ppg. ... Blair Oaks beat California 42-15 last year, snapping a two-game losing streak to the Pintos.

THE FINAL CENTRAL BANK/KRCG TAILGATE OF THE SEASON will be held Friday night in California. From 5-6:30 p.m. prior to the 7 p.m. kickoff, and while supplies last, fans will receive a free t-shirt, quarter pound hot dog, Hy-Vee chips and a Coke product.

This is the 10th straight year Central Bank has supported area schools with a tailgate. They estimate they've given away over 48,000 t-shirts ... along with too many hot dogs to count.

The surging Bulldogs have won three straight and five of six since opening the season with a 35-13 home loss to Class 5 powerhouse Battle. The one loss during those six games was a 20-19 decision to Hannibal. Two weeks after that game, the Pirates traveled to Fulton and lit up the Hornets, 75-22. ... Fulton bounced back last week with a 22-20 win at Boonville. ... Last Friday in Mexico, Cameron Holman scored on 52-yard run and caught a 17-yard touchdown pass from John Grubb as the Bulldogs celebrated Homecoming with a win over the Tigers. ... The Bulldogs outscored the Hornets 64-39 in a crazy one last year in Mexico.

The Dutchmen are coming off their signature win of the season, a 47-6 rout of Union, which entered the game riding a five-game winning streak. Owensville picked off four passes in the victory, two of those by Devon Ridenhour, one of which he returned 50 yards for a touchdown on the third play of the game. ... Owensville received one vote in the state poll this week. ... Sullivan has won three straight after opening the season 0-4. Last week, the Eagles pulled out a 20-14 overtime win over St. James, a team Owensville handled 41-0. ... Sullivan beat Owensville 41-31 last year.

After last week's draining loss to Falcons, the Indians could have an emotional hangover Friday night against the rival Mustangs. ... Osage rolled up 283 yards of total offense against Blair Oaks in the first half, but could manage only 28 yards in the second half. ... Eldon lost 42-7 to Blair Oaks on Sept. 9, but has reeled off three straight wins since, including last week's 38-12 verdict over Versailles. ... Versailles is another common opponent for these teams, and the Indians topped the Tigers 42-6 two weeks ago. ... The Mustangs won a wild one over the Indians last year in Eldon, 52-49.

South Callaway scored touchdowns on 10 of its 11 possessions in its rout of Bowling Green, which crossed midfield only one time and was limited to 14 yards rushing. Landon Horstman attempted only six passes for the Bulldogs --- who rushed for 312 yards --- but he completed five of them for 166 yards and three touchdowns. ... The Bulldogs received 12 votes in the state poll this week, still four points away from cracking the Top 10. ... The Bulldogs are seeking their second 8-0 start in three years, as the 2014 team started 14-0 before losing to Lamar in the state championship game. ... Clopton's lone loss was to North Callaway, 20-6, a team South Callaway beat 36-14. ... South Cal rolled to a 53-8 win last year over Clopton, which has made huge strides this season after going 2-8 in 2015. ... The winner of this game locks up the EMC Conference championship.