This game was on.

The Blair Oaks Falcons took notice after that.

This game was over.

So, too, is the race for the Tri-County championship.

After the Indians took an early 13-0 lead, the Falcons outscored Osage 40-3 in the final three quarters to pull away for a 40-16 victory in a clash of ranked Class 3 teams before a big crowd at the Falcon Athletic Complex on Friday night.

"I was really proud of how the kids battled," Falcons coach Terry Walker said. "You want to be challenged and you want to be tested, and I thought we were tonight. But our guys responded."

This turned out to be a slightly below average night, but the start was something completely different.

"They're a good team and they had a good game plan, they came out and executed and forced us to adjust," Walker said.

Before the adjustments, Osage took the opening kickoff and sprinted  72 yards in three plays, capped on an 47-strike from Zach Wheeler to James McCann.

After Jason Edwards kicked the point-after to make it 7-0, Blair Oaks had given up more points in the first quarter in 45 seconds than it had in the first six games (6).

After the Falcons went three-and-out, the Indians marched 78 yards in 12 plays to make it 13-0, a drive fueled by two fourth-down conversions --- one coming from their own 30 on 4th-and-2 on a fake punt turned 10-yard pass play.

The touchdown came on a 16-yard pass from Wheeler --- a talented, 6-5, 180-pound junior --- to Drake Gaines, a pass that appeared to be intercepted by Ben Thomas, before the 6-4 Gaines stripped it away from the 5-8 cornerback.

"I thought he had the interception," Walker said.

The Falcons started the comeback with five minutes left in the first quarter, the start of a 15-play, 59-yard relationship that ended on the first play of the second quarter on a 5-yard pass from Nolan Hair to Braydan Pritchett.

That was a game-turning play, as it came on 4th-and-goal.

"Nolan's going to be a great quarterback," Walker said. "He's just a sophomore and he's still learning, but he's a tough, competitive kid, and he doesn't back down."

That would be it for Osage, however.

The Falcons took the lead for good on a short pass from Hair to Cody Alexander, who took it the distance --- including an ankle-breaking cutback at the 10 --- for a 46-yard scoring play to make it 20-16 at the break.

After the break --- and after Osage had rolled up 283 yards of offense in the first half --- the Falcons held the Indians to just 28 TOTAL yards.

"The first quarter," Walker said, "they were definitely hurting us in our zone coverage and their receivers were doing a good job of finding the soft spots in the zone.

"We made some adjustments in the second quarter with some of our secondary play, and I thought our guys played pretty well after that."

Along with the physical adjustments, five plays before the second touchdown for Osage, Walker had called timeout to talk with his defense.

Let's just say this was a "pep" talk. Or, a good, old-fashioned mental adjustment.

"I was just trying to motivate them a little bit," Walker said. "I think we were kind of playing tentative and afraid of making a mistake. All I ask of them is that they play hard, and I don't think they were playing as hard as they could play.

"I'm not a scoreboard watcher, I watch the players on the field, their body language, the look in their eyes ... and I didn't like what I saw."

After those adjustments, he sure did.

Jake Van Ronzelen (7) rushed for 175 yards and two touchdowns as the Blair Oaks Falcons whipped School of the Osage 40-16 on Friday night. 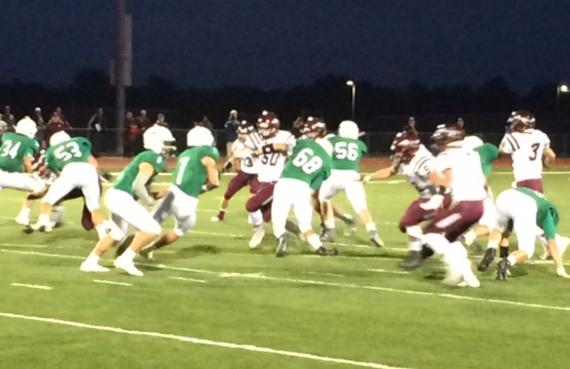