Jefferson City Jays running back Rashaun Woods (bottom) squeezes into the end zone to score on a 3-yard run during the first quarter of Friday night's game with Rock Bridge at Adkins Stadium.

On a night for big plays, senior running back Rashaun Woods had the biggest night of all, rushing for 174 yards and five touchdowns in Jefferson City's 61-21 rout of Rock Bridge.

JEFFERSON CITY, Mo. --- Big plays? This one had more big plays than Broadway.

Some guys will do anything to show off for the girls.

Playing front of the Queen and her Court, the Jefferson City Jays used a barrage of big plays to celebrate a happy Homecoming with a 61-21 rout of the Rock Bridge Bruins on Friday night at Adkins Stadium.

Fittingly, this affair was played in front of a big crowd, one of the biggest this stadium has seen in several years. Included in the gathering were players from 40 years ago, as the 1976 team was honored as it celebrated the 40th anniversary of the school's first state football championship.

The Jays have lost a scant few Homecoming games in the last 60 years, anyway, including a 37-0 record for the stadium's namesake, Pete Adkins. And they weren't about to lose this one.

The Bruins (1-5) had to punt on their first possession, and the big-play floodgates were open. Dennis Barnes returned it 64 yards to the Rock Bridge 11 and three plays later, Rashaun Woods scored on a 4-yard run.

The biggest night of all belonged to Woods, as that score was the first of five touchdowns --- five --- for the 6-foot, 190-pound senior, who finished with 174 yards on 18 carries.

After 3-yard run by Woods made it 13-0 with 3:41 left in the first quarter, the Bruins made it somewhat interesting --- but not for long.

Kion Pilot scored all three touchdowns for the Bruins, the first of those coming on --- of course ---  a big play, a 90-yard kickoff return to make it 13-7 after one.

But Jefferson City blew it open with a 35-point onslaught in the second quarter, as the lead blossomed to 48-14 at the break.

Barnes, another senior, supplied the other second-quarter touchdown on an 83-yard kickoff return.

It was more of the same in the second half, which was played under the mercy rule after Jefferson City scored on the third play of the third quarter on a 71-yard pass See to Huff to make it 55-14.

If this were a big-play contest, See would win the silver medal and Huff the bronze, but the gold went to Woods who scored his fifth touchdown on a 27-yard scamper to make it 61-14 early in the second half.

This game continued a trend for the Jays this season, a trend that has now reached six games. Let's just say Jefferson City hasn't played any nail-biters.

Jefferson City's five wins have been by a total of 216 points, an average of 43.3 points per win, while their closest margin of victory has been 26 points. But the Jays' one loss was by 40 points, making the average difference 42.7 points per game. 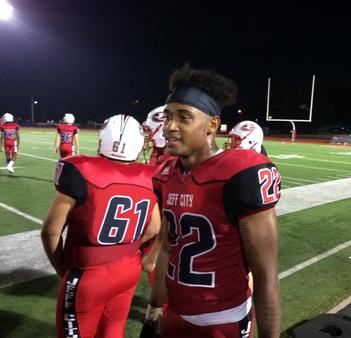 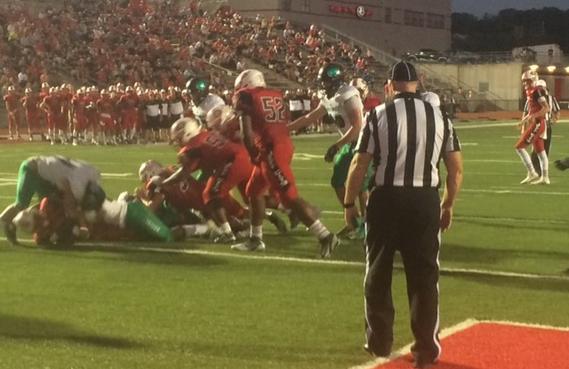