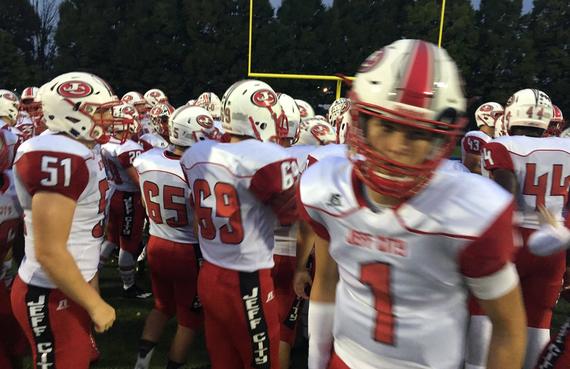 Gunnar See (1) and the Jefferson City Jays --- who are coming off an impressive 26-0 win over SLUH --- will host Rock Bridge for Homecoming on Friday night at Adkins Stadium.

The Spartans have scored an eye-popping 119 points in their last two games --- and what quarterback Brevinn Tyler has done is even more eye-popping. In just those two games, he's accounted for 875 total yards (503 passing, 372 rushing) and 13 touchdowns (six passing, seven rushing). Simply amazing. That would be considered a really good season for most players, if not a career. ... Battle can almost name the score against struggling Hickman, which has lost 17 straight and 25 of 26. ... The Spartans beat the Kewpies 64-6 last year.

The Jays are coming off one of the best wins in Ted LePage's 10 years at the helm, an offensively-efficient and defensively-dominating shutout of SLUH, which was ranked in the Top 10 at the time. Jefferson City was hammered 54-14 by Har-Ber the week before the big bounce-back win against a worthy opponent. ... After giving up a staggering 583 yards rushing to Har-Ber, the Jays limited the Jr. Billikens to only 110 last week. ... Rock Bridge is coming off its first win of the season, a 48-21 win over rival Hickman. ... Three of the Bruins' four losses have been to ranked teams, Rockhurst and Lee's Summit in Class 6, and Battle in Class 5. ... The Jays beat the Bruins twice last season, 31-21 in the regular season and 31-14 in the first round of districts.

The Lakers had an 82-point turnaround in their last two outings, losing to Kickapoo by 42 and beating Parkview by 40. ... Camdenton had 386 total yards in the win over Parkview, 261 on the ground. Jay Griffin led the ground attack with 134 yards and two touchdowns to help the Lakers celebrate Homecoming. ... Rolla is coming off its first win of the season, a 42-16 victory over Brad Drehle's winless Waynesville Tigers. ... Camdenton has won eight straight against Rolla, including 43-15 last year.

It's certainly been a rollercoaster ride for Helias the past three weeks, losing by 31 points, winning by 38, then losing by 35. In the two losses, the Crusaders gave up 115 points; in the win, they scored 52. ... Helias rolled up 398 yards of total offense in the loss to Battle, but surrendered 524. The Crusaders were within one score midway through the third quarter, at 36-29, before the Spartans scored the game's final 28 points. ... This is the third of four straight games for Helias against Columbia schools (including current record) --- Hickman (0-5), Battle (5-0), Father Tolton (1-4) and then Rock Bridge (1-4). ... This the first meeting between Helias and Tolton.

It's difficult to get good read on Smith-Cotton. The Tigers are very close to being 5-0, if not for two one-point losses --- one of those in overtime. But those two teams are 2-6 in their other games, and the Tigers have beaten three teams that are a combined 2-13. ... Smith-Cotton celebrated Homecoming with its win over Nevada, as Jaden Kendrick rushed for 109 yards and a touchdown and also threw for a score. ... This is the first of three straight road games for the Tigers.

To say Blair Oaks has been dominant in its last three games would be an understatement, indeed. While outscoring their opponents 139-27, the Falcons have outgained them by a hard-to-believe 1,256 yards to 199. ... The Falcons left no doubt it would be a happy Homecoming last week, as it busted open a 31-point halftime lead on Hallsville and led 61-14 after three quarters. ... The Falcons have won 16 straight in the regular season and are 14-0 in such games under second-year head coach Terry Walker. ... Southern Boone was within 22-17 of state-ranked Osage entering the fourth quarter last week, before the Indians scored the game's final 10 points in their 32-17 win. ... Blair Oaks blasted Southern Boone 61-26 last year.

Senior Jason Edwards had a remarkable night in the Indians' win over Southern Boone last week --- he returned two interceptions for touchdowns, he caught a touchdown pass and also kicked two field goals. ... This might be considered a trap game for the Indians --- big game last week, Homecoming and all of its distractions this week, and at Blair Oaks next week in a game that will decide the Tri-County Conference championship. ... Versailles has won three games this season, matching its season total from last season. In the three seasons prior to last year, 2012-14, the Tigers won a total of three games. ... Osage beat Versailles 42-6 last year.

This appears to be the best matchup in the area Friday night as the Panthers meet the Bulldogs. Centralia is rolling, winning its five games by a whopping 209-19, with three shutouts in their last four games. Mexico's only losses have been to a good Hannibal team by one point and a very good Battle team in the season opener. ... Mexico is coming off a 28-7 win over Barry Blank's Boonville Pirates (1-4), who avoided the shutout in the final two minutes. Michael White rushed for 156 yards and two touchdowns for the winners. ... Mexico won last year's meeting with Centralia, 27-0.