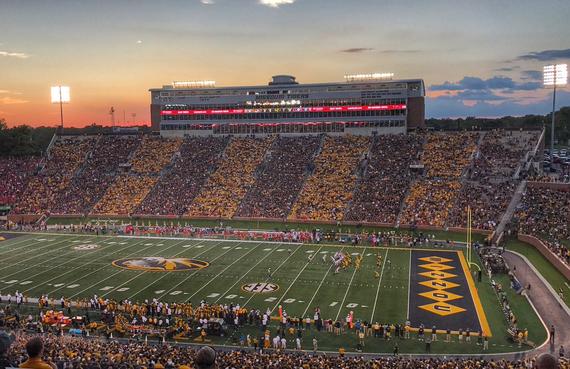 COLUMBIA, Mo. --- If you expected Missouri to win its opener at West Virginia, you haven't been paying attention.

If you expected Missouri to lose its home opener to Eastern Michigan, you're probably a Kansas fan.

Speaking of our friends to the West, the Jayhawks are really, really lousy. Again. Did you know that FCS (Division II) North Dakota State --- which beat Iowa on Saturday --- has more wins against FBS schools in its last six games (6) than Kansas has in its last 59 (5)?

Then came Saturday night at Faurot Field, Week 3, Missouri vs. Georgia. What did you expect? Did you expect this?

This night had a special feeling from the outset.

And a perfect National Anthem. With everyone standing, Olympic bronze-medalist J'den Cox gave a gold-medal performance. If you didn't see it, find it, it's worth it.

This was a night for feel-good moments --- until the final 90 seconds, that is --- as the Tigers stood toe-to-toe with the No. 16 Bulldogs before dropping a tough 28-27 decision before a Black and Gold-striped crowd of 57,098.

Okay, the finish was a brutal one. Facing 4th-and-10 from the MU 20 with 1:36 left, Georgia scored on a 20-yard pass from Jacob Eason to Isaiah McKenzie.

The difference was one play. Well, one play and five Missouri turnovers.

Still, you must look at the big picture, because if this is any indication, last year's misery --- which enveloped the program both on and off the field --- will soon be a distant bad memory.

A lot of positives to embrace, instead of unwatchable losses, and a guy going hungry, and the entire institution going sideways.

At the very least, this was a watchable loss.

After last year's Dawg in Georgia --- a game with no touchdowns in a 9-6 Georgia sleep-over --- this one had two touchdowns the first 12 minutes, five in the first half, seven overall, and a fantastic finish.

Last year's offensive line was a senior-dominated, experienced group. And they couldn't block a drunk guy in a phone booth. (Do they still have phone booths?)

This year's offensive line has no seniors, no experience. And they're good.

It all starts there, and nobody appreciates it more than sophomore quarterback Drew Lock. This line isn't great at run blocking yet, but they can protect the quarterback.

Lock is maturing and has gotten better in his own right. But even more important to his success is that he's had the chance, instead of constantly being chased, caught and punished. And given time, he's throwing to guys who can actually catch the football, unlike last year.

Saturday night against vastly better competition, Lock was good again --- except for throwing three interceptions. Still, he was 23-of-38 for 376 yards and three touchdowns.

Touted as one of the top quarterbacks in the country coming out of Lee's Summit High School, Lock's now looking the part.

So many of his completions were quick-release laser-shots, including a dart to J'Mon Moore on a quick slant that squeezed into a window smaller than a newborn's shoe. Moore did the rest, outracing the Georgia defense for a 79-yard touchdown to give Mizzou a 20-14 midway through the second quarter.

Unlike last year, when this offense was patently offensive, the Tigers can gain yards --- they had 471 Saturday night --- and score points. That really helps the cause, scoring points.

Unlike last year, when the Tigers had one of the best defenses in the nation, the unit struggled against Georgia, especially when it counted most. The Bulldogs went 80 yards in 10 plays in 123 seconds for the game-winning score.

But there was a Charles Harris sighting, the latest stud for Defensive End U, who had his first three sacks of the season.

Special teams were actually a positive and not a negative, as Tucker McCann made field goals of 33 and a career-high 46 yards.

Meanwhile, it was the Georgia kicker who looked like a 32-handicapper on the driving range with his variety of hooks and shanks.

in the end, this was a brutal loss, to be sure. But we learned some things, such as:

* Mizzou fans have something they didn't have last year.

After what this program's been through, that's all you can expect.

It was "Tiger Stripe" night for Mizzou fans at Faurot Field, and they held up their end of the bargain.